Ontario is a world-class producer of seed and commercial field corn due to the region’s exceptional combination of climate, soils, production expertise and infrastructure. There are many yield limiting factors such as diseases and understanding these factors are critical to the future health and growth of the Ontario corn industry. For this reason, a corn disease and pest survey was conducted in 2017 across the province which builds on surveys from previous years.

The information obtained on disease and insect impacts in Ontario seed corn and commercial corn fields will assist both private and public breeders in hybrid development which will help meet this challenge and potentially reduce loses to diseases and other pests in the future.

In addition to the disease occurrence, the incidence (number of affected plants) and severity of the major leaf diseases (eyespot, GLS, NCLB and common rust) were assessed visually in each of the 231 selected fields based on 20 plants at each of five points located approximately 10 m apart and 5 m from the field edge (Fig. 1). A rating scale of 1-7 based on percent area under the disease [1 (no disease) to 7 (severely diseased)] was used for recording the disease severity (Reid and Zhu 2005). Disease incidence was recorded based on the number of plants with a particular disease symptom. Leaves displaying NCLB symptoms were collected for E. turcicum race identification and distribution patterns. Additional symptomatic plant parts were also collected for subsequent laboratory analysis, especially for unidentifiable or suspected Goss’s bacterial wilt and Stewart’s bacterial wilt. GPS coordinates of the sampled fields were also recorded and used to map locations. 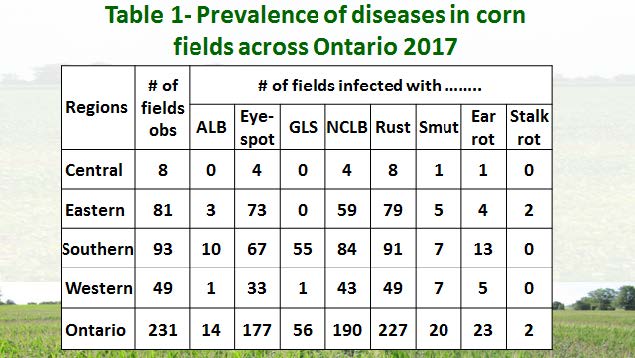 Northern corn leaf blight which is traditionally the most common foliar corn disease in Ontario was found in 82% of the fields sampled with significantly lower disease severity and incidence compared to previous years (Table 1). Sixteen of the 190 fields with NCLB had incidences ≥30% and 26 had severity ratings ≥4. The most affected 28 fields were found in 12 counties of the 18 surveyed across the province [Stormont, Dundas & Glengarry (9), Oxford (5), Dufferin (2), Huron (2), Ottawa (2), Perth (2), Chatham Kent (1), Leeds and Grenville (1), Middlesex (1), Prescott & Russell (1), Waterloo (1) and Wellington (1)], illustrating that NCLB occurrence is wide spread across Ontario even though severity and incidence was low. The disease was found in 90% of the fields sampled in Southern and Western Ontario compared to 72% of the fields in Eastern Ontario; however, mean disease incidence in affected fields was considerably more in Eastern Ontario (9.7%) compared to Southern (4.7%) and Western Ontario (7.2%). The high incidence of NCLB in Ontario is always a cause for concern since yield losses are associated with the disease but this year overall incidence and severity was considerably low compared to earlier years possibly due to a combination of climatic factors, fungicide applications and increased use of more tolerant hybrids by growers. There is a need to look for additional disease management strategies other than use of foliar fungicides, which increases the production costs and can be an environmental risk. In future, sustainable and economic corn production will require the development of new NCLB Ht gene/inbreds and their incorporation into high yielding commercial corn hybrids.

The 231 surveyed sites will be used to map the geographical distribution of physiological races of E. turcicum as it is not uncommon to find both resistant and susceptible NCLB lesion types on the same leaf. Likewise, we observed that the reaction of some of the hybrids to NCLB differ depending on where they were grown in Ontario, suggesting the presence of different races of E. turcicum, as has been reported in previous years (Zhu et al. 2013, Jindal et al. 2016). To verify this, and to subsequently map the distribution of such races in corn growing regions of Ontario, 137 leaf samples with NCLB symptoms were collected during the survey. The geographical distribution of physiological races of the fungus E. turcicum which causes NCLB is another study.

Common Rust was most prevalent among the foliar diseases detected in Ontario corn in 2017. It was found in 227 (98%) fields sampled (Table 1) at a mean disease severity of 3.5 and an incidence of 29.4% (Table 2). One fourth of the sampled fields have disease incidence ≥40%. High levels of common rust (≥4) were recorded in 76 fields distributed across all counties visited. Overall, like NCLB and eyespot, common rust severity was very similar across the province.

Eyespot was less prevalent in 2017 compared to previous years, particularly 2015. This disease was found in 177 (77%) of the fields sampled (Table 1) at a mean severity of 2.3 and an incidence of 8.8% (Table 2). Only 17 of the 177 affected fields had severity levels of ≥4 and 19 had disease incidence ≥35%. During 2017, eyespot was less common in Southern Ontario (72%) compared to Eastern Ontario (90% of fields affected). However, 3 individual fields in Southern Ontario had high eyespot severity ratings of 4.0, compared to the mean eyespot severity of 2.3 in affected fields in Ontario. The less widespread distribution of eyespot in Ontario was further demonstrated by the elevated severity ratings of ≥4 only in 17 corn fields.

Grey leaf spot was found in 55 (24%) of the fields sampled (Table 1). Compared to 2015 and 2016, GLS was more widely spread in Ontario in 2017. The disease was more severe in five Southern Ontario counties (Chatham-Kent, Essex, Lambton, Middlesex and Oxford), the same as reported in 2016 (Jindal et al 2017). In Eastern Ontario, where 51 fields were sampled, GLS was not detected in any of the fields. Traditionally, GLS has been a major concern in the extreme southwest (Essex and Chatham-Kent) where factors such as increased corn residues, intensive hybrid and seed corn production, and humid conditions have favoured its development. This is in stark contrast to the U.S. Midwest corn-belt where GLS occurs throughout the region and is the most economically important foliar corn disease (Wise 2012).

Anthracnose leaf blight and dieback was detected in only 14 fields (6%); considerably less than previous years.

Fungal ear and stalk rot diseases: Common smut and head smut were found only in 20 (9%) of sampled fields (Table 1); less than last year. There were only two fields with incidence greater than 3%. Head smut was found in 2 fields in 2017. Ear rot was found in 23 fields at a low incidence levels. Ears with exposed tips were found to have more Fusarium spp. infection. Stalk rot was not found in any of the fields visited. The low incidence and occurrence of ear and stalk diseases at the time of the survey suggests the occurrence of these diseases were low in 2017 compared to earlier years; however, timing of this survey was likely early to detect high levels of ear and stalk rots. Ear rots (Gibberella, Fusarium, Diplodia, and Penicillium) were at low levels at the time of the survey. In order to assess the presence of corn ear moulds and grain vomitoxin (DON) in the 2017 corn crop a difference survey was conducted by the Ontario Ministry of Agriculture, Food and Rural Affairs (OMAFRA) along with Ontario Agri Business Association (OABA) from October 7 to 20, 2017, which observed visual mould symptoms were less compared to earlier years. Eighty six per cent of tested grain samples exhibited below 2 ppm DON which was also much less than what has been observed in recent years (Roser and Tenuta, 2017).

Stewart’s bacterial wilt, which historically has been the most economically important disease in Ontario seed corn production, once again was not detected in any of the seed or commercial corn fields sampled during 2017. The decline in Stewart’s bacterial wilt in Ontario, as well as in the U.S., has been attributed to the effective control of its vector, the corn flee beetle through the use of neonicotinoid seed treatment (Chaky et al. 2013). Likewise, Goss’s bacterial wilt and blight were also not found in Ontario.

A 2018 corn disease survey is planned.