This project tested the effects of AGTIV mycorrhizal inoculant on potato, cereal and soybean crops. The inoculant is said to improve plant growth, health, and increase overall yield and quality of the crop. With the added fungi in the soil, the mycorrhizal inoculant is also supposed to improve soil health and structure. This trial tested the effectiveness of the inoculant on improving crop production and soil health, with the goal of determining whether the inoculant could improve the quality and yields of crops grown in northern Ontario, therefore benefiting farmers with increased profits from these crops. Long-term benefits could also be provided from improved soil quality, resulting in higher-quality crops in the future.

The Northeastern Ontario Soil and Crop Improvement Association, in partnership with the West Nipissing/East Sudbury and West Sudbury SCIAs and the Northern Ontario Farm Innovation Alliance, conducted a three-year study to test the effects of Premier Tech’s AGTIV mycorrhizal inoculant on potato, soybeans, and oats between 2018 and 2020.

Mycorrhizae are a type of fungi that are found naturally in soils and form mutually beneficial networks with the roots of plants. These networks allow plant roots to reach and uptake minerals, nutrients, and water. As the fungal network expands, the plant has access to minerals, nutrients and water that, through its roots alone, it would not be able to reach. This relationship between plant and fungi stimulates root development and overall plant growth, resulting in healthier and more vigorous plants and therefore greater production and disease resistance. In addition to plant health, mycorrhizae improve soil structure, increase organic matter, and play a positive role in soil aggregation. Soil disturbances, especially frequent deep tilling, break up these fungal networks and reduce their positive effects.

Many trials studying the use of mycorrhizal inoculants on different crops have shown improvements in plant health and yields. Therefore, there is a strong possibility that this product would be a viable option for northern Ontario farmers to help improve crop production.

Premier Tech offers the AGTIV line of biologically active treatments, which, through an inoculant applied at the time of planting, is intended to repopulate and re-establish mycorrhizal networks. The AGTIV line includes treatments optimized for different crops.

This product line is of interest to farmers in the north, and as such, was selected as the mycorrhizal inoculant product to be used over the course of this project.

Three Premier Tech AGTIV mycorrhizal inoculant products were tested annually on their corresponding crops in four locations in Sudbury and West Nipissing regions between 2018 and 2020. The inoculant products tested were as follows:

The form of inoculant used (i.e. liquid versus powder) was dictated by the equipment available to the farmers conducting the trials. The trials were conducted on two farms in the Sudbury district area and two farms in West Nipissing area. Each farm conducted trials on 5-acre plots of alternating strips of inoculated and non-inoculated crops. Each farm had two plot sites – one on high fertility soil and one on low fertility soil, selected based on the farmer’s knowledge of their fields. The size and spacing of these strips was determined by each farmer’s equipment, but each plot had at least four strips of both inoculated and non-inoculated crops. Two farms tested the inoculant on potatoes and two farms tested the inoculant on oats and soybeans.

Trials were, where possible, conducted on the same plots each year in order to measure the effect of three consecutive years of mycorrhizal development in the soil. In order to adhere to farmers’ existing crop rotations, the crop grown was changed each year as necessary. In addition to the mycorrhizal inoculant, the crops also received standard fertilizer and pesticide treatments.

Figure 1. Trial plot set-up. At least four reps of inoculated and non-inoculated strips were planted at each plot site over a 5 acre area. 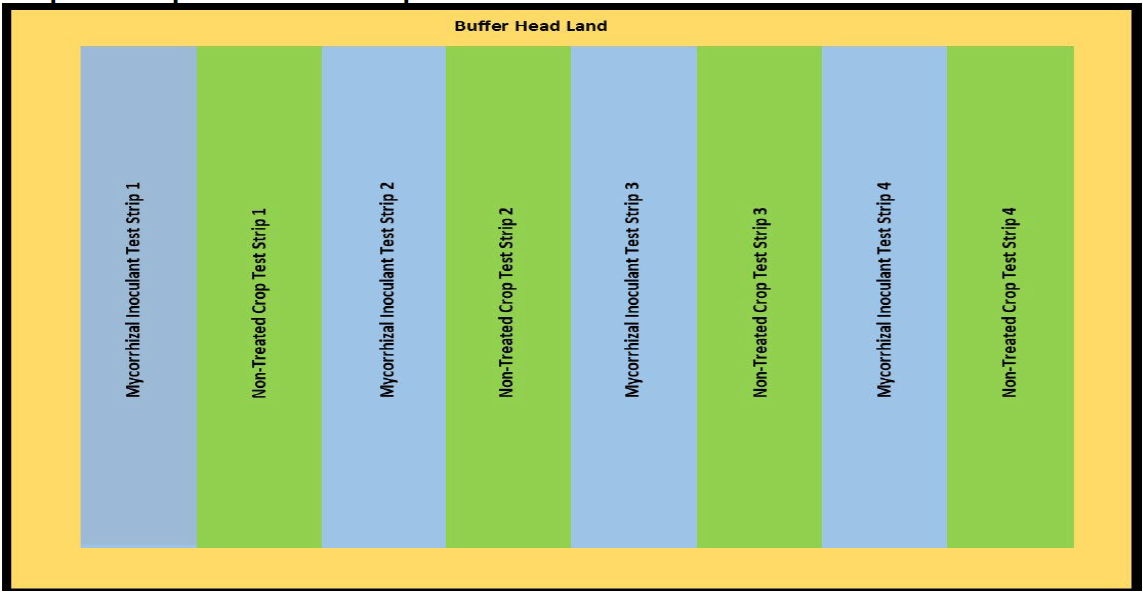 The oats from West Nipissing Site 1 had poor yields in 2020 due to significant lodging and regrowing. The corresponding yield data was left out of this report. However, prior to these issues, tissue samples were taken and are reported below, followed by tissue samples from West Nipissing Site 2. The purpose of the tissue sample analysis was to determine whether the mycorrhizal inoculant application correlated with increased nutrient and mineral uptake, which would be evident by higher concentrations of nutrients and minerals in the tissue of plants. Increased nutrient and mineral concentrations would be an indicator of the positive effects of the mycorrhizal inoculant, and a sign of healthier, more vigorous, and more disease resistant crops. For oats, samples of the flag leaf at the head emergence from boot stage were gathered in early July 2020. 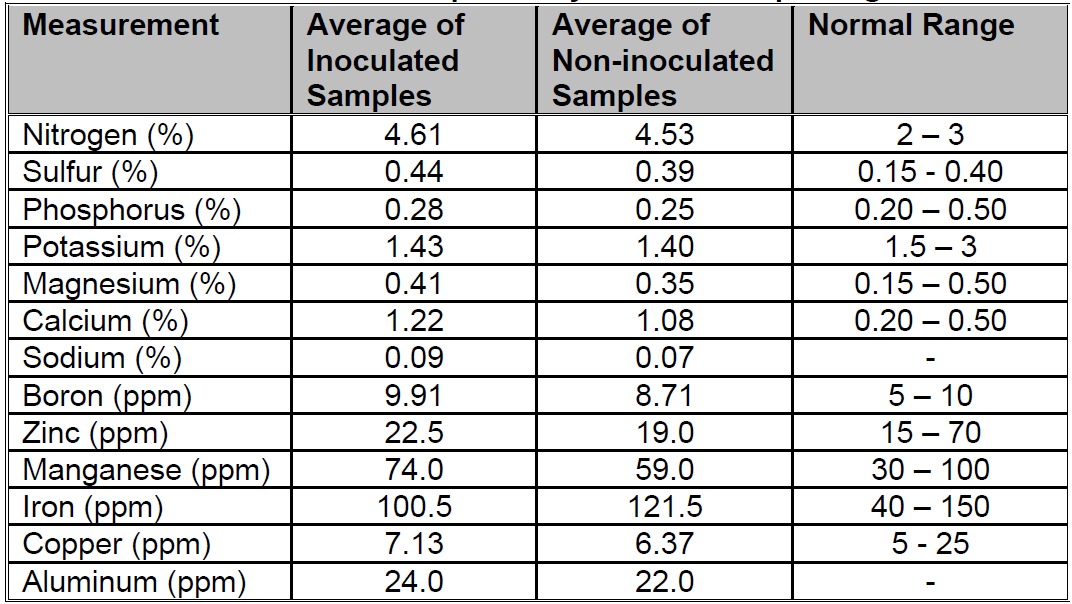 One of the most significant differences in nutrient and mineral content between inoculated and non-inoculated crops was seen in oats in the low fertility field at West Nipissing Site 2. This may suggest that the mycorrhizal inoculant is most effective in low fertility fields. 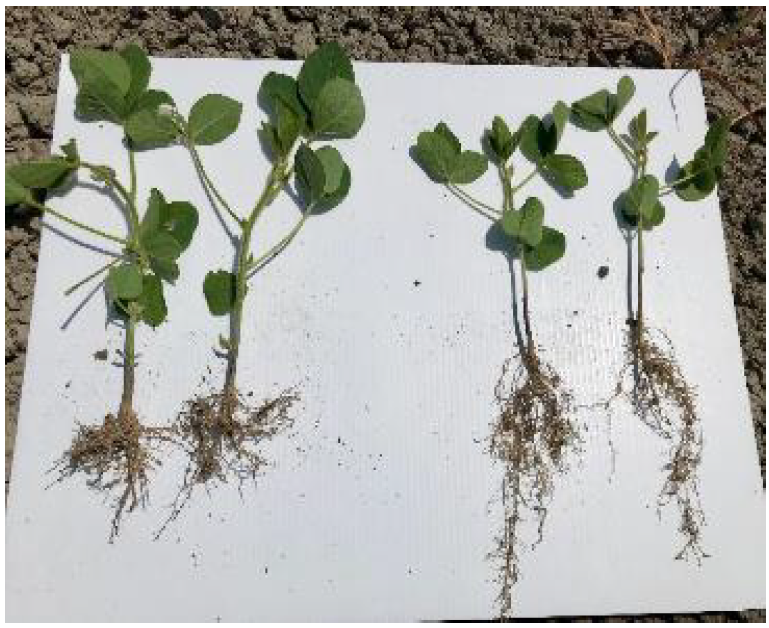 Soybean tissue samples were gathered in early July 2020. Samples were taken from recent fully developed leaves at the full bloom stage of growth. 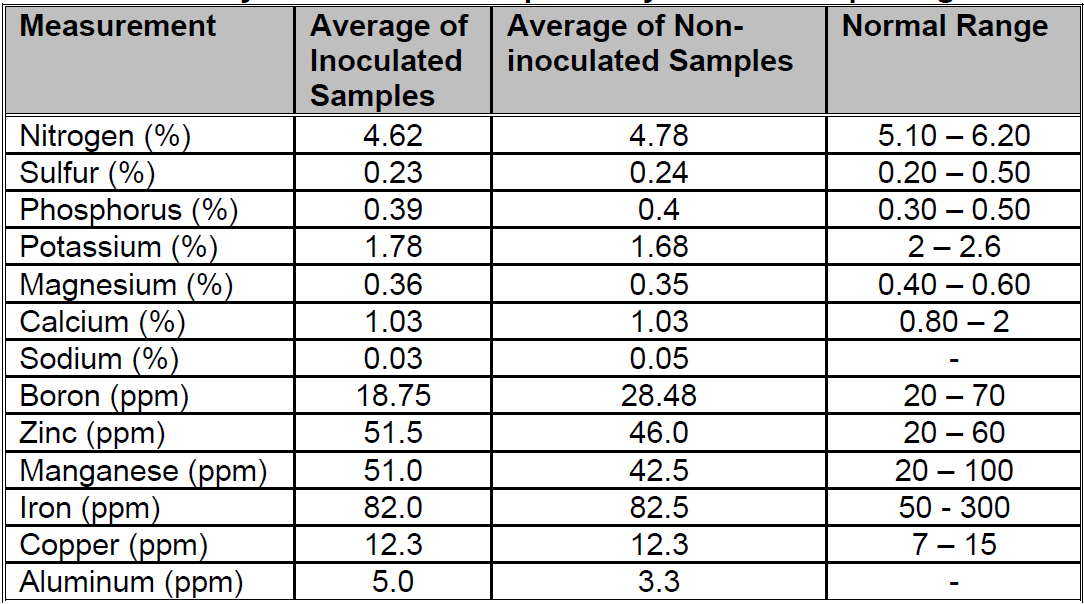 Potato plots were grown on two farms in 2019, and on one farm in 2020, all of which were in Sudbury district. 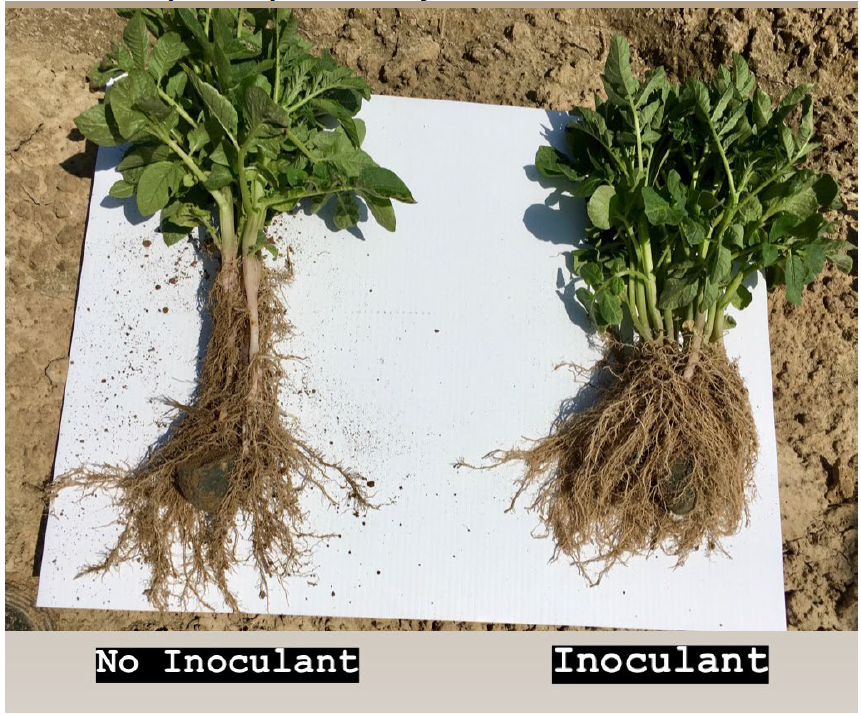 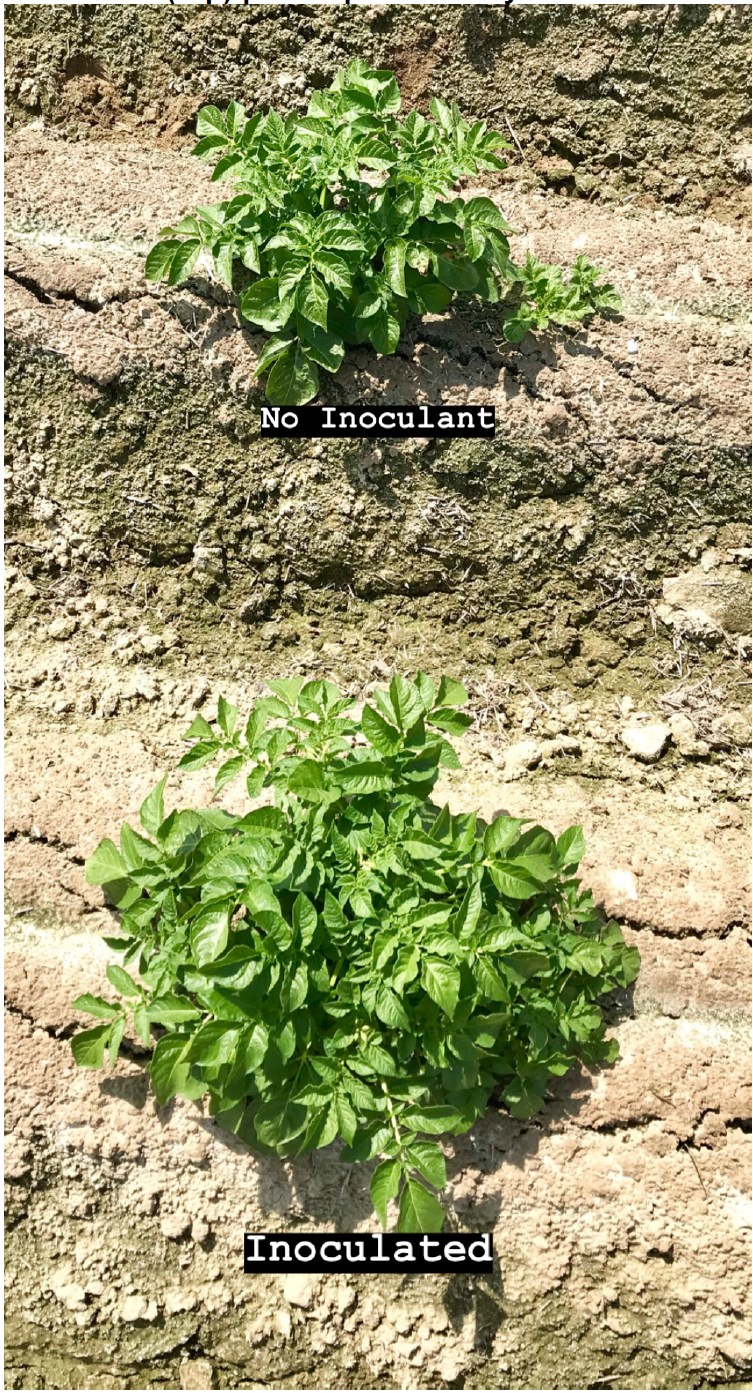 In 2020, yield measurements were conducted just prior to harvest at Sudbury Site 1. The field was subdivided into four equal sections lateral to the length of the field. Within these divisions samples of both inoculated and non-inoculated strips were gathered by digging up 1 meter lengths of the potato row, weighing the resulting potatoes, and returning them to the soil for harvest a day or two later. In this way, 48 samples of inoculated potato strips and 48 samples of non-inoculated potatoes were measured, representing samples evenly distributed across the entire field.

Potato tissue samples were gathered 70 days after emergence in mid July 2020. Samples were collected from the fourth petiole from the top of the potato plants. 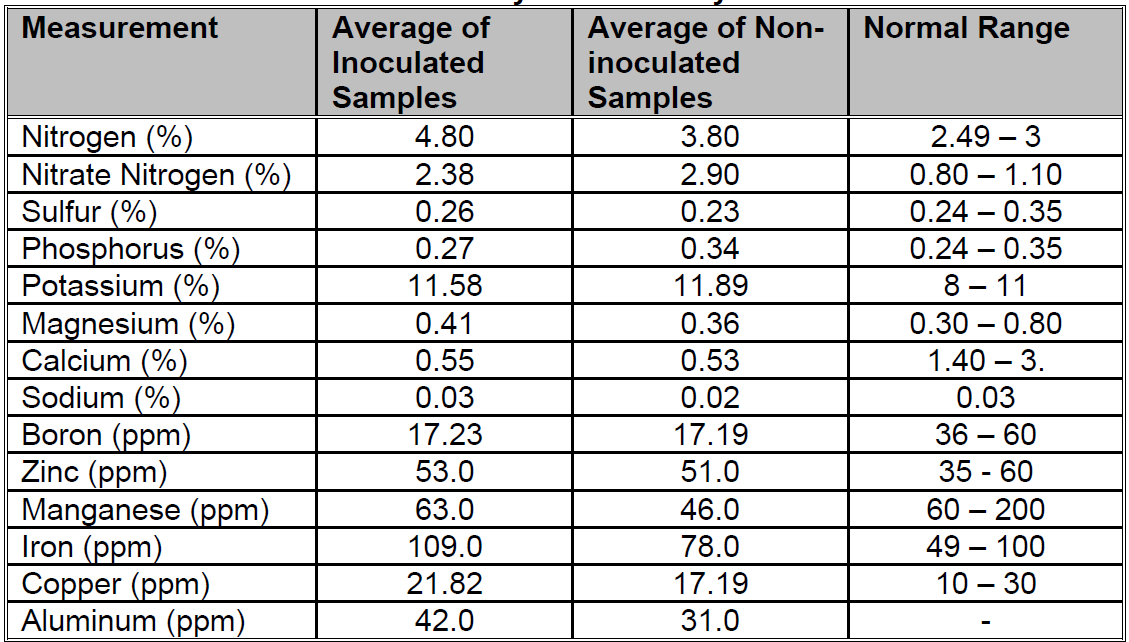 Table 9. A Comparison of Increased Income and Cost of Inoculant Application

The AGTIV field crops powder inoculant product, which was used for oats, costs $478 for a 2kg bucket, which covers 40 acres. The AGTIV field crops liquid inoculant costs $239 for a 950ml bottle, which covers 20 acres. Both products come out to an approximate application cost of $11.95 per acre. Given an oats price of $4.60 per bushel (approximate price of January 2021) the inoculant correlates with an average increase in income of $4.23 (0.92 bushels) per acre, which, subtracted from the $11.95 per acre application cost, results in a net decrease in income of $7.63 per acre.

The AGTIV soybean powder inoculant product costs $560 for 4.7kg bucket, which covers 40 acres. This results in an approximate cost of $14 per acre to inoculate. Given a soybean price of $14 per bushel (approximate price of January 2021), the inoculant correlates with an average increase in income of $11.55 (0.825 bushels) per acre, which, subtracted from the $14 per acre application cost, results in a net decrease in income of $2.45 per acre.

This economic analysis takes onto account only the application cost of the inoculant and the correlated increased yield. It does not account for other potentially positive outcomes from the inoculant, such as more disease resistant plants and better uptake of soil nutrients. For example, it would not take into account the potential saved cost of additional spraying for a deficiency that these crops did not have because they received the inoculant.

Over the course of the project, all crops showed increased yields which correlated with the application of the mycorrhizal inoculant.

In summary, the results of this project suggest that, while the mycorrhizal inoculant application does correlate with improved plant health and yield, that increased yield does not, on average, outweigh the cost of the inoculant application in the first place.
This report will be made available on FarmNorth.com and nofia-agri.com. A factsheet will also be made available in Winter 2021. Currently, further study of biostimulants and mycorrhizal inoculants is being explored in partnership with Algoma University and the University of Guelph. This potential study will build on the findings from this project and will further explore the viability and application of these products in northern climates.

A huge thank you to our farm co-operators, Valley Growers for their industry expertise, Collège Boréal for their project support, TECC Agriculture for their agronomical support, Northeastern Ontario Soil and Crop Improvement Association and the local associations for their project and communications support, and the Northern Ontario Farm Innovation Alliance for collaborating the project.