Cereal rye is a relatively inexpensive cover crop that provides a variety of benefits including erosion reduction, weed competition, nitrogen scavenging and soil organic matter building. It is very winter hardy and in many cases is the only cover crop option to seed after grain corn or soybeans in Ontario.

The potential benefits of cereal rye can be maximized by allowing longer growth in spring. By delaying termination of cereal rye to the time of soybean planting, biomass can be greatly increased. In wet springs, the actively growing rye can also help dry soil by transpiring moisture. There is, however, some risk associated with delayed rye termination. Greater rye biomass can delay soil warming, dry out soil excessively in dry springs, affect the crop stand and slow early season soybean development.

In this on-farm trial, replicated and randomized field length strips were used to evaluate the impact of two different termination timings on cereal rye biomass, as well as soybean population and yield.

Four on-farm trials were conducted in 2017 and 2018 (Table 1). There were two treatments: early termination of rye (approximately two weeks before soybean planting) and late termination (day of planting, also referred to as “Plant Green”). Sites had between 2 to 4 field-length replicates of each treatment.

No tillage was performed at any of the sites except for St. George 2017, where minimum tillage was done on grain corn residue in fall of 2016. Table 2 describes soybean varieties grown, seed treatments and herbicides used.

Cereal rye biomass was sampled at five geo-referenced locations along each strip (Figure 1) at the time of termination. All aboveground matter within a hoola hoop (diameter: 50.8 cm) was collected. Rye biomass samples were oven-dried and weighed. Sub-samples of dry biomass were submitted to a lab for nutrient analysis. 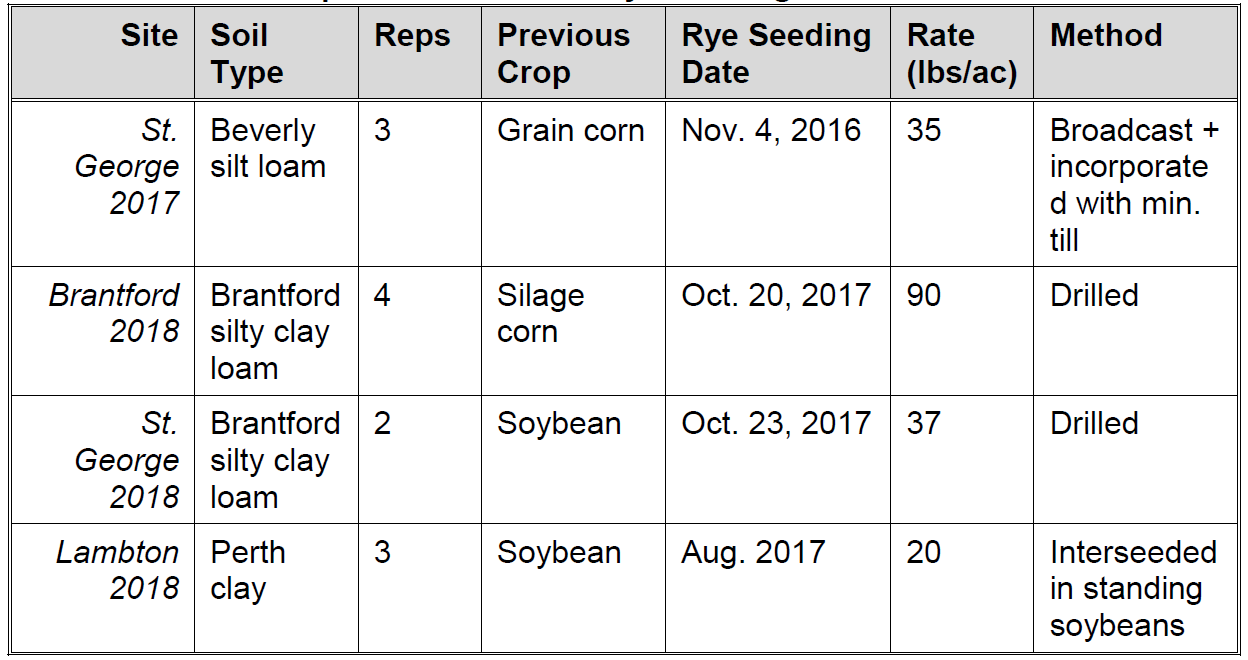 Soil samples were taken from a depth of 0-12 inches at the five geo-referenced locations. Samples for early terminated and late terminated strips were taken on the same date at each site (approximately the date of soybean planting) and kept cool and then frozen until delivery to soil test laboratory. Soils were analyzed for nitrate concentration.

Plant stand and node/pod counts were made from the same geo-referenced locations as described above.

Figure 1. Plot set-up at the Brantford 2018 site. Each strip was marked and all samples and counts were taken from the same five geo-referenced locations (red dots) along the length of each strip throughout the season. 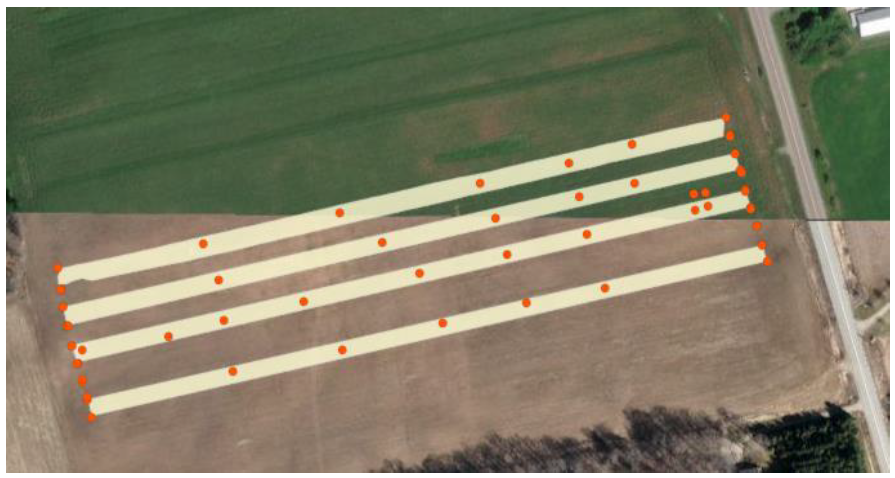 Yield was the average load value for the full length of each treatment strip, based on values from a calibrated yield monitor at St. George 2017 & 2018 and Brantford 2018 sites. Yield values from the Lambton 2018 site were based on individually weighed loads from each strip.

Rye growth accelerates in May.

Across four sites, rye biomass increased on average by 4.3-times when terminated at time of soybean planting compared to ~2 weeks prior (Table 3).

Table 3. Rye Biomass (Dry) At Early Versus Late Termination Timings Across All Sites.

At the site with the greatest amount of rye biomass, Brantford 2018 (Figure 2), allowing an extra two weeks of growth resulted in over 8 times more plant material. Extra biomass contributes to building soil organic matter faster and provides a long-lasting mulch.

The early termination of rye resulted in slightly higher soil nitrate levels at the time of planting. Soil nitrate concentration was more than 4 parts per million lower in late-terminated strips (10.0 ppm vs. 14.2 ppm; Figure 3).

Figure 3. Soil nitrate concentration (0-12 inch depth) in early terminated and late terminated strips, as averaged across all three 2018 sites. Soil samples were taken on the same day at each site (approximately the day of soybean planting). 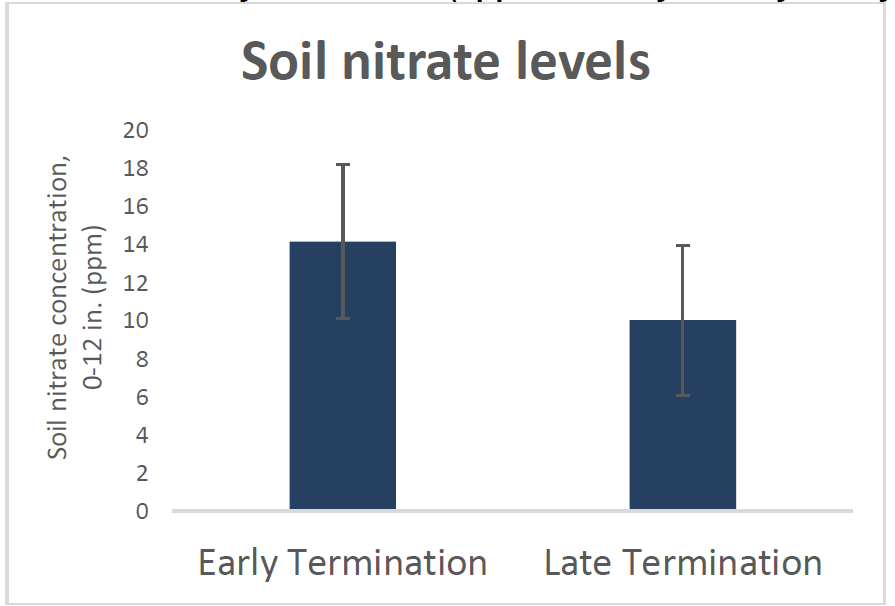 On average across all three 2018 sites, the amount of nitrogen scavenged by cereal rye was 39.5 lbs/acre when terminated late and 12.7 lbs/acre when killed early (Figure 4). Nitrogen taken up by rye is released slowly over the season and is less likely to be lost to the environment. Since soybeans fix their own nitrogen, this uptake is unlikely to negatively affect the crop. 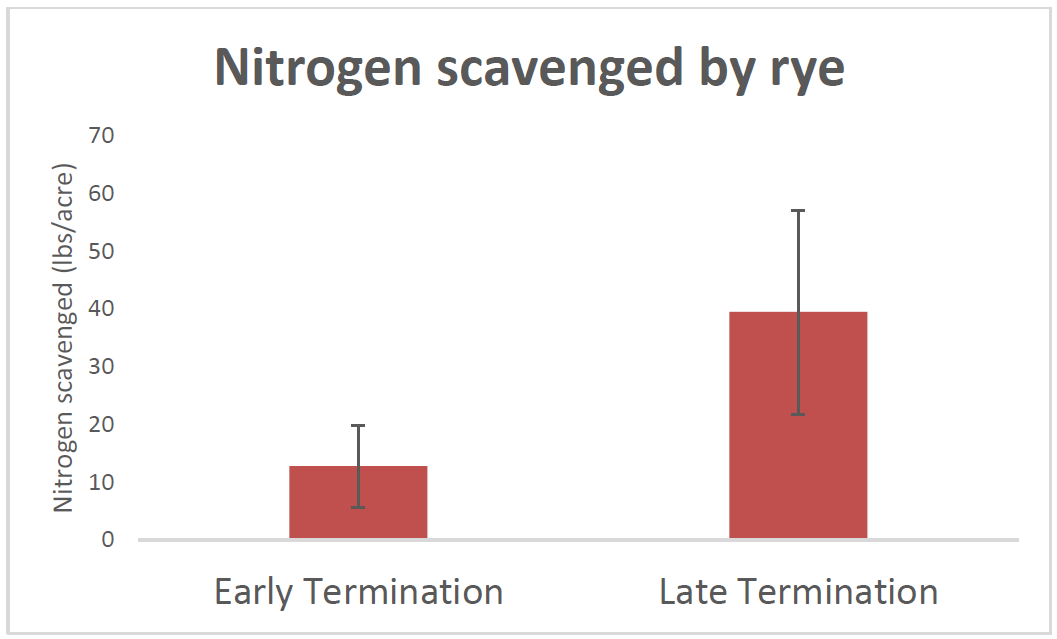 Delaying termination of rye does not come without some risk. Soybeans stands were reduced at some sites (Table 4). It’s particularly important to plant into moisture and ensure that the seed trench is closed. Also, if conditions are very dry leading up to planting, terminating rye early can avoid even drier soil.

Soybeans in late-terminated rye tended to have delayed development. Across all sites in 2018, plants were consistently one growth stage behind in the “plant green” plots (Figure 5). Soybeans are adaptable, to a point, to reduced stands and moderate delays in development. At the Brantford 2018 site, for example, despite delayed early season growth, soybeans planted green into rye had an equal or greater number of pods per plant and seeds per pod compared to those in the early-terminated rye (Table 5).

Figure 5. Soybeans at the Brantford 2018 site on June 26 (left). Soybeans planted green into rye were one growth stage behind and shorter than those planted into early terminated rye. At the Lambton 2018 site on July 31 (right), soybeans planted into early terminated rye (right-hand side of photo) were taller and one growth stage ahead.

Effects on weeds were not evaluated in depth. However, a greater density of Canada fleabane was observed in early-terminated strips at the Brantford 2018 site (Figure 6). At this site, the herbicide program did not include a product with good efficacy on glyphosate-resistant Canada fleabane. Upcoming on-farm research will evaluate the impact on weeds of early and late-terminated rye compared to no rye cover crop.

Figure 6. Soybeans in early-terminated rye (left) had a much greater density of Canada fleabane than soybeans planted green
into rye (right) at the Brantford 2018 site. 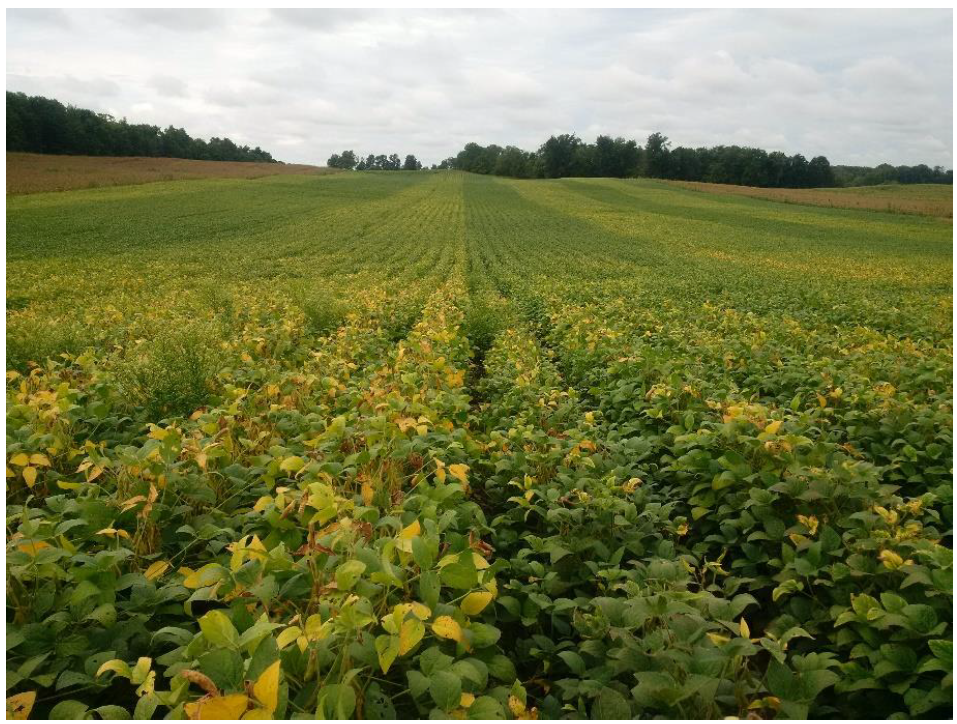 Soybean yield varied from a low of 50 to a high of 69.5 bushels/acre across all sites (Table 6). There was no statistically significant difference in yield between early and late termination at any site. There was, however, an overall trend of reduced yield with planting green into rye (average loss of 1.4 bushels/acre).

Table 6. Summarized yield results from all sites. Statistically significant differences in yield between early vs. late termination at each site are shown by different letters. Yield is based on 13% moisture.

Making sense of the numbers.

With a trend toward yield loss at 3 out of 4 sites, it’s clear that delaying termination of rye until soybean planting carries some risk. Overall, however, the difference was very small. At the Lambton 2018 site, very dry conditions in June and July likely made matters worse following planting that was too shallow in the plant green strips. And at the Brantford 2018 site, a reduced plant stand was likely the reason for the slightly lower yield, since nodes/pods per plant didn’t differ between treatments.

Based on these observations, the following lessons were learned:

There’s no doubt that allowing an extra couple weeks of growth maximizes the soil benefits of a rye cover crop: more biomass, more time with active roots and a lasting mulch. It’s a new practice, however, and still needs some fine-tuning.

If you’re new to rye as a cover crop, gain confidence by terminating it a couple of weeks before planting soybeans in the spring. If you’re more experienced, leave a couple strips to be sprayed after soybean planting this coming spring and see how it works on your farm. Have a goal in mind – is it weed management, building organic matter or overall soil health? And finally, be flexible and adapt your plans according to weather conditions. 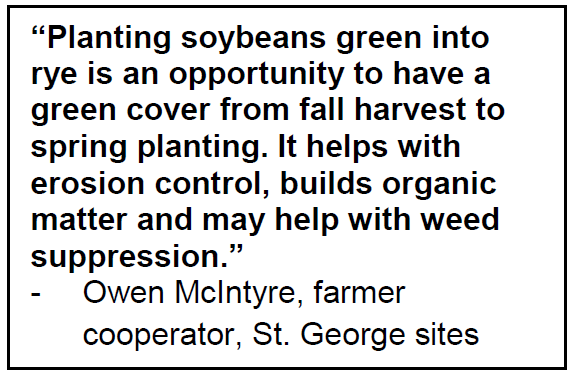 From the fall of 2018 to the fall of 2020, an OSCIA Tier Two project by Heartland and Eastern Valley regions will look closer at the effect of cover crop rye on weeds, crop yield and more. The two-season project will look deeper at the question of termination timing in the spring and evaluate the use of a roller crimper in organic systems.

This project was conducted by Brant SCIA with OSCIA Tier One funding. Thank you to the farmer cooperators who helped make it possible: Owen McIntyre, Tom Pate, Doug Rogers and Steve Sickle.