Cereal rye is a relatively inexpensive cover crop that provides a variety of soil benefits including erosion reduction, weed competition, nitrogen scavenging and a modest contribution to soil organic matter. It is very winter hardy and in many cases is the only cover crop option to seed after corn or soybeans in Ontario.

The potential benefits of cereal rye can be maximized by allowing longer growth during the spring growing period. By delaying termination of cereal rye prior to corn or soybean planting, biomass can be greatly increased. There is, however, some risk associated with delaying rye termination. In the case of corn, greater rye biomass can immobilize nitrogen and/or delay soil warming.

In this on-farm trial, replicated and randomized field length strips were used to evaluate the impact of three different termination timings on crop yield as well as cereal rye biomass and canopy cover.

Cereal rye was established by broadcasting seed at a rate of approximately 35 lbs/ac on November 4, 2016 after grain corn harvest, followed by incorporation by shallow vertical tillage at the soybean site. At the corn site, rye was drilled at approximately 40 lbs/ac on October 15, 2016 after soybean harvest. Soil type at both fields, which were located just east of St. George, Ontario, was silty clay loam.

Each treatment was replicated 3 times and randomized across each field (see Figure 1 below for corn site). The corn site consisted of field length strips; the treatments at the soybean site were half field length strips. Strips were each approximately 60 feet wide. Yield measurements were obtained by harvesting the centre of each strip.

Soybeans were no-till drilled at 15 inch spacing. Corn was planted in 30 inch rows and received approximately 75 lbs/acre of nitrogen as 28% UAN the day prior to planting. The remaining nitrogen requirement was applied at side-dress timing.

Cereal rye biomass was determined for each treatment by collecting 8 subsamples per plot within a 0.2 m2. Biomass samples were dried for 48 hours and measured as dry matter. Canopy cover of cereal rye was also recorded and averaged across 8 locations in each treatment by using the Canopeo app (www.canopeoapp.com). 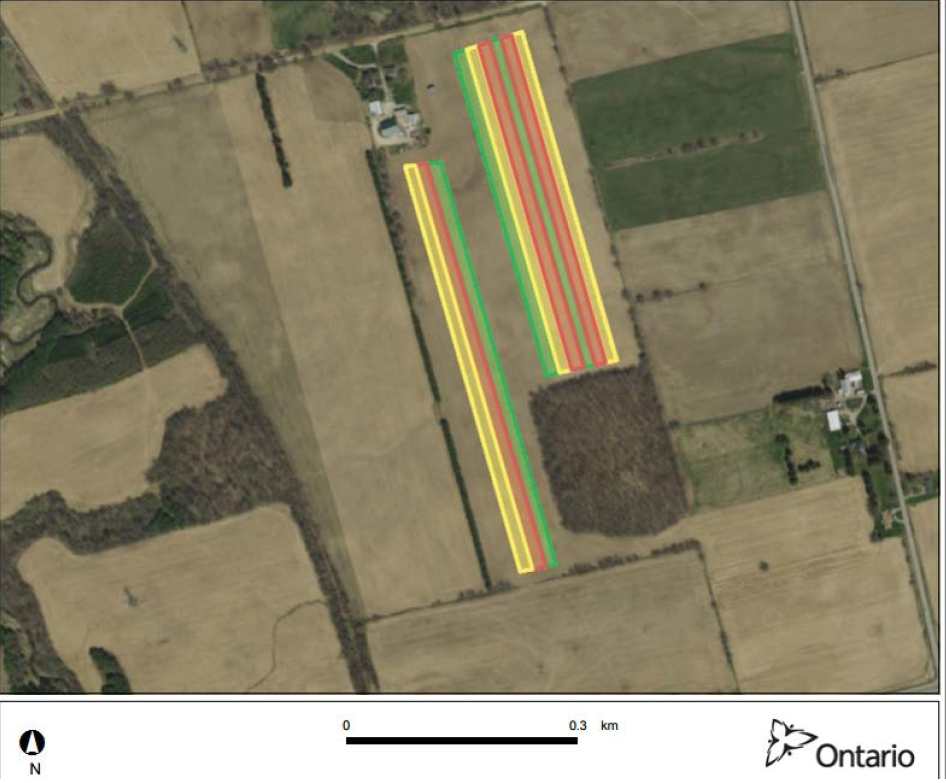 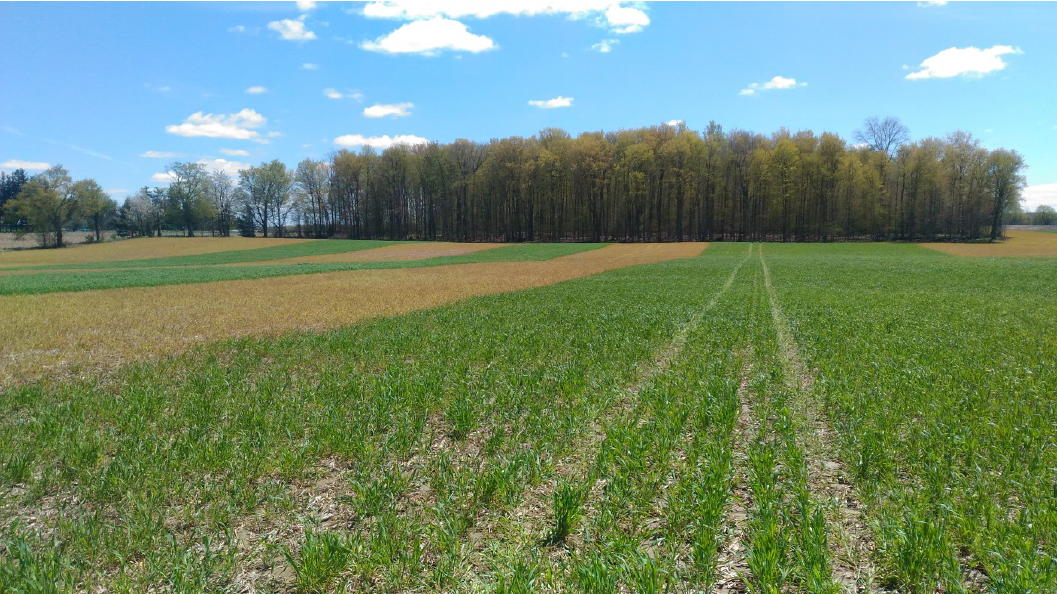 The trial site received above average rainfall in the spring of 2017. The presence of cereal rye played an important role in reducing soil erosion, which was highly visible in neighbouring fields.

At the soybean site, cereal rye growth and biomass was minimal until late May. Biomass remained at 400 lbs/acre for the 2.5 and 1.5 week timings (May 4 and 12). It was not until the second half of May that cereal rye growth accelerated. Dry biomass measured on the day of planting (May 23) was over 1200 lbs/acre – 3x as much as on May 12 (Figure 3). 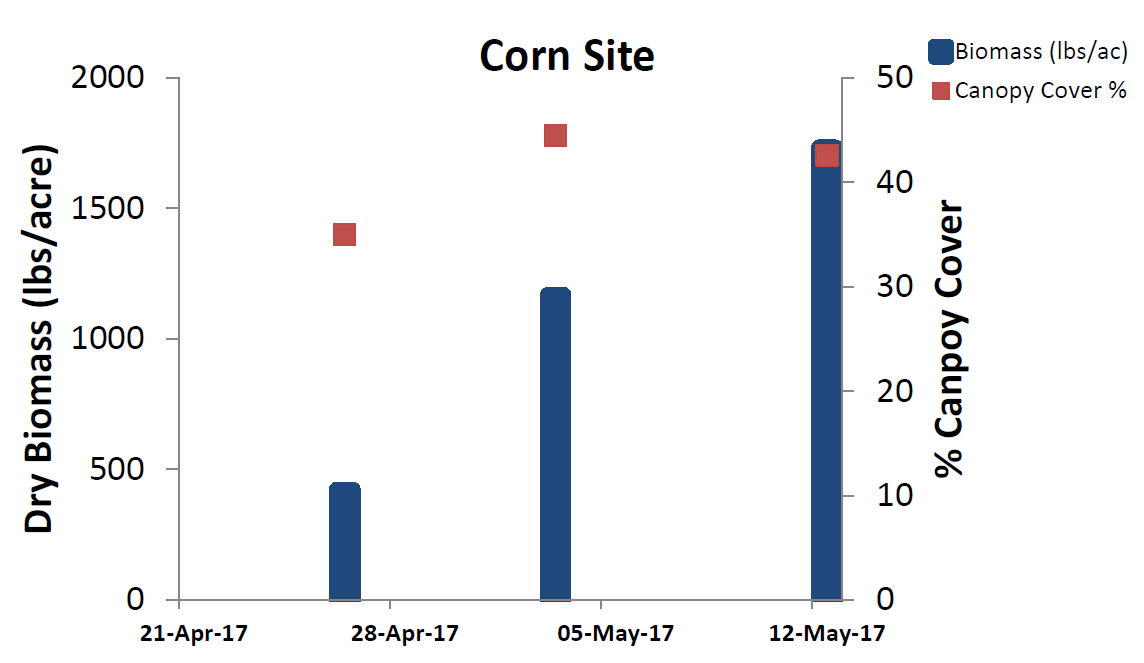 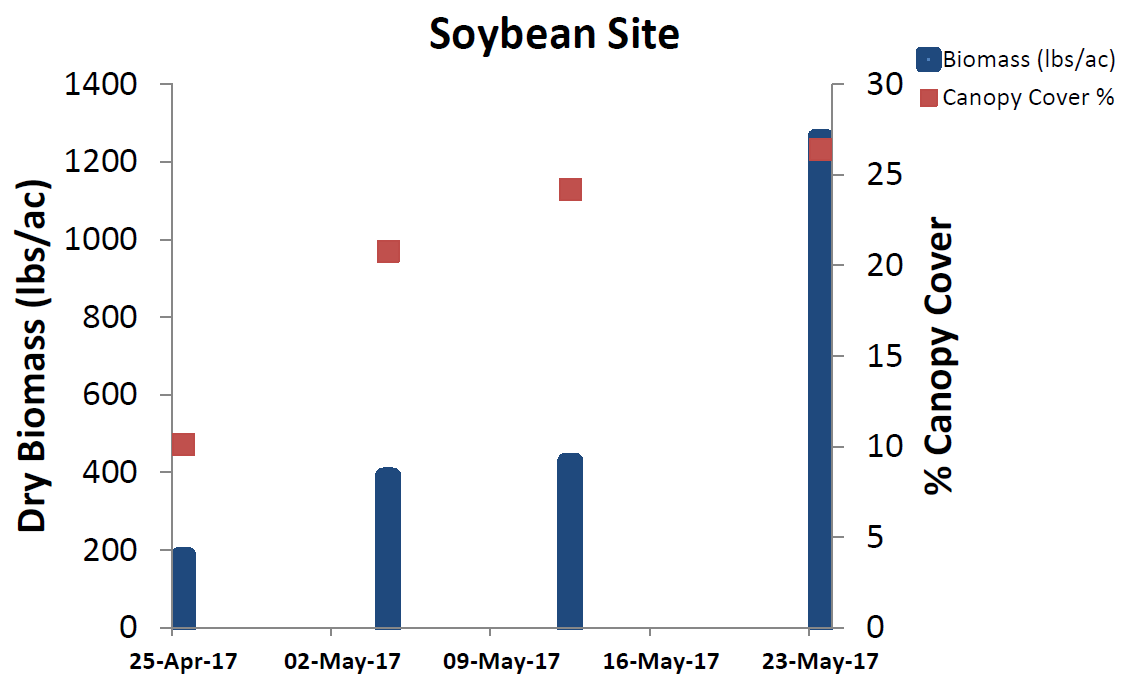 Corn yield was not affected by cereal rye termination timing. Yield averaged between 212 and 215 bu/acre across the treatments. Grain moisture and test weight were not affected by termination timing (data not shown). Stand counts performed in mid June did not show any difference amongst treatments. There were no obvious visual differences in corn development and vigour amongst treatments throughout the season. 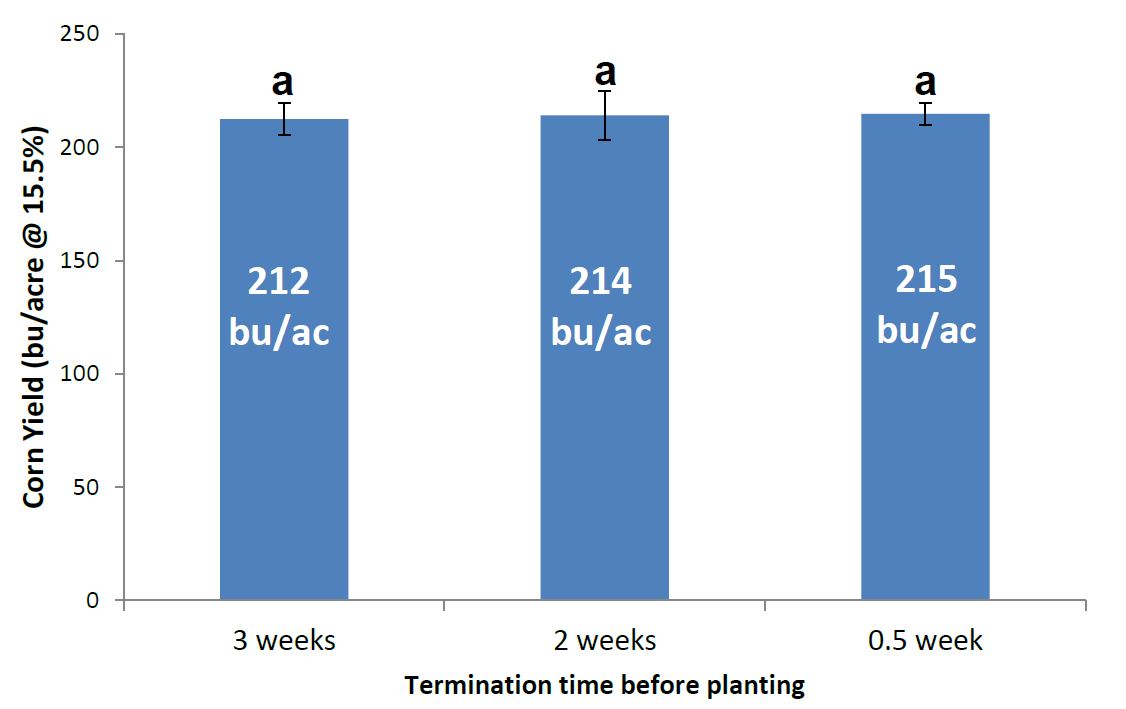 Figure 4. Corn yield in each rye termination timing treatment, as averaged across three replicated strips. The letter “a” indicates no statistically significant difference amongst treatments. 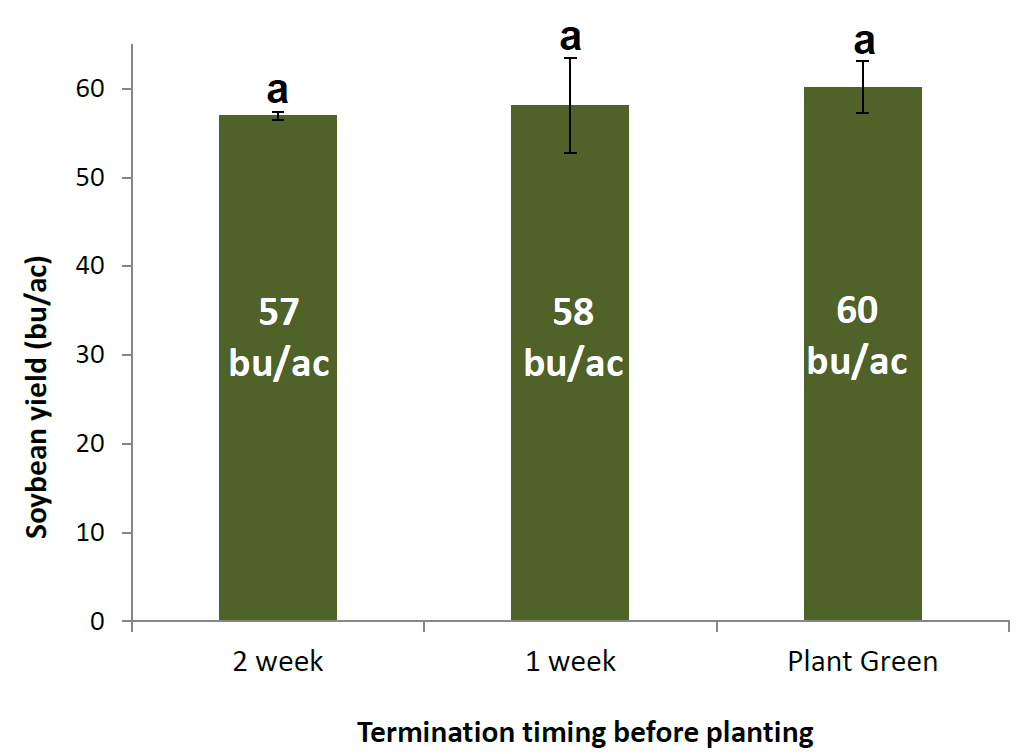 Figure 5. Average soybean yield in each rye termination timing treatment, as averaged across three replicated strips. The letter “a” indicates no statistically significant difference amongst treatments.

The results of this on-farm trial indicate that delayed termination of a cereal rye cover crop did not affect yield of the following corn or soybean cash crop.

The findings should be interpreted cautiously as they only represent one year of data on two fields with similar soil texture (silty clay loam).

Academic research and on-farm trials by the Practical Farmers of Iowa (http://www.practicalfarmers.org/farmer-knowledge/research-reports/) have found that the presence of a rye cover crop can negatively impact corn yield under some circumstances. Late termination of cereal rye prior to corn planting can increase risk by elevating potential for soil nitrogen tie-up, altering soil moisture and temperature conditions or providing a ‘green bridge’ for pathogens. This trial did not evaluate yield following no rye cover crop.

The gain in cover crop biomass associated with late termination was significant at both sites, but particularly large at the soybean site. Rye seeded after grain corn typically does not have a good opportunity for significant fall growth. Growth accelerates in the spring and, as this trial showed, biomass can increase rapidly if rye is terminated closer to planting. The tripling of rye biomass that occurred at the soy site with late termination provided a greater contribution to soil organic matter as well as greater nitrogen uptake.

Soybeans have been shown to be able to tolerate high amounts of cereal rye residue without losing yield in other regions. This on-farm trial evaluated soybean performance in a moderate rye residue situation. Rye seeded after early harvested crops, such as corn silage, will produce much more biomass. These results do not necessarily apply to such situations, which may require planter adjustments and residue management strategies.

Plans are underway to repeat the trial in the 2018 season on the same two fields. Two additional soybean fields in Brant County are anticipated to join the trial. OSCIA Tier I funding will be used in 2018 for plant and soil analyses, which will provide better information on the ability of cereal rye to scavenge soil nitrogen during the non-growing season.

This pair of on-farm trials was conducted in association with Brant County Soil and Crop Improvement Association (BSCIA). The work could not have been completed without the dedication of BSCIA director and farmer collaborator, Owen McIntyre. Thank you to Steve Sickle for assistance with yield measurement. Special thanks as well to summer student Tasha Valente, who helped with field work throughout the project.