Although there is a considerable amount of information regarding herbicide options for popcorn in the United States1, little is known about response under Ontario conditions, since there is a very small acreage grown. Historically, if a corn cultivar has shown susceptibility to crop injury after herbicide applications, the risk of yield loss increases. The purpose of this study was to evaluate popcorn’s crop tolerance and yield response to the application of several common post-emergence herbicides. If there are herbicides that increase the risk of crop injury and yield loss, they can be avoided by farmers who grow popcorn in Ontario.

“Robust” popcorn was planted on May 19th, 2017 at a seeding rate of 20,000 seeds/acre at the Elora Research Station. Primextra II Magnum, a herbicide that is registered on many different types of corn and is considered a “foundation program” to provide early season weed control was applied on May 22, 2017 and prior to crop emergence. All post-emergence herbicides were applied on June 16, 2017 to popcorn at the 5 leaf over stage of growth and within the critical weed-free period. This coincided with grassy and broadleaf weeds that emerged after the residual activity of Primextra II Magnum had dissipated being at the 4-6 leaf stage. The trial was designed as a randomized complete block with three replications. Visual assessments of crop injury in relation to the control were completed at 7 and 14 days after application (DAA). Grain was harvested on November 7th, 2017 and dried down to 15% moisture content.

Crop injury was greatest following the applications of Marksman and Ultim (Table 1). This is not surprising, given that neither herbicide is registered for use in popcorn in the United States1. At one month after application, there was little evidence of any crop injury throughout all treatments. However, at harvest, there was noticeable ear distortion in plots where Ultim had been applied (Figure 1). Although the active ingredient found in Ultim (rimsulfuron), is also found in Destra, there was little crop injury observed in popcorn treated with Destra, nor was there any ear distortion. It is plausible that the broadleaf active ingredient (mesotrione) that is also part of Destra, antagonizes the activity of rimsulfuron such that crop injury is reduced. Further investigation is required to test this hypothesis. 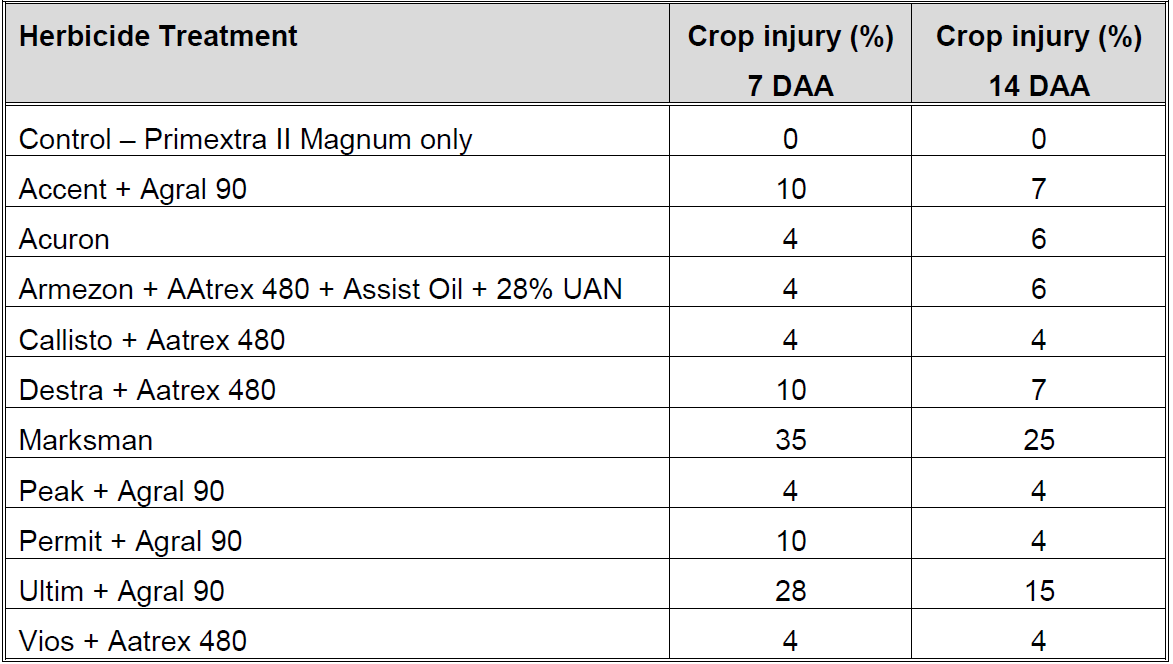 Grain yield was lower than the control when Marksman was applied post-emergence to popcorn. All other post-emergence treatments applied at the 5 leaf stage and following a pre-emergence application of Primextra II Magnum were equal to or higher than the control of Primextra II Magnum without any follow-up weed control (Table 2.). Generally speaking, grain yield mirrored the level of weed control provided by each of the postemergence
herbicides applied. Of the herbicides not currently registered for use on popcorn in the United States or Canada, Acuron, Armezon + Aatrex 480 + Assist Oil + 28% UAN and Vios + Aatrex 480 demonstrated acceptable levels of crop injury, grain yield and weed control.

Popcorn visual injury was greatest following the post-emergence applications of both Marksman and Ultim with the later causing ear distortion. Grain yield was lower than the control where a post-emergence application of Marksman was applied. All other treatments had grain yields that were equal to or higher than the control. Three herbicide programs that are currently not registered for use in the United States or Canada but have shown promising results in this trial where: Acuron, Armezon + AAtrex 480 + Assist Oil + 28% UAN and Vios + Aatrex 480.

Figure 1. Ear distortion at harvest in plots that received a post-emergence application of Ultim + Agral 90. 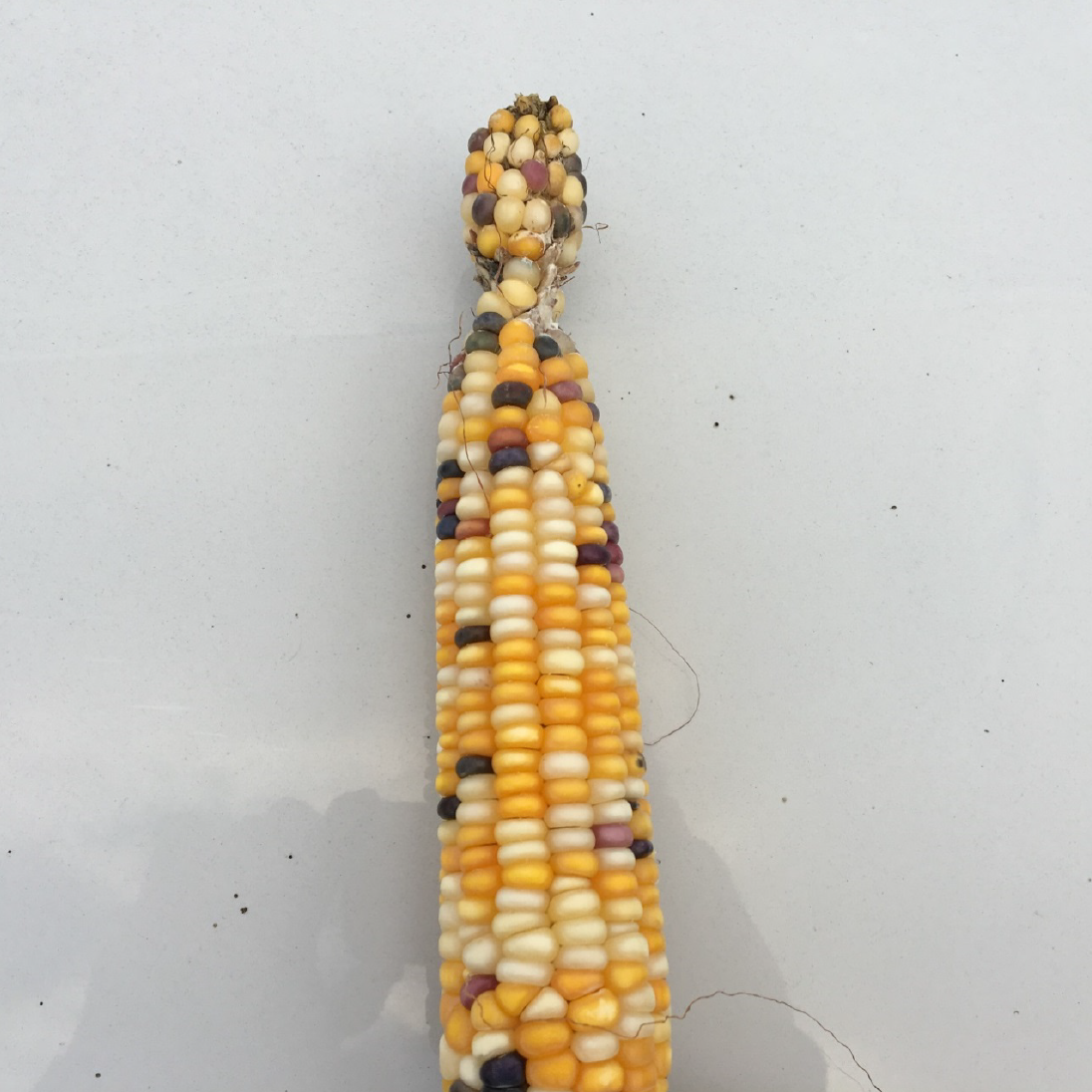 Trial will be repeated again during the 2018 season.

1The Popcorn Handbook - Herbicides. The Popcorn Board. Chicago, IL. Accessed on January 30, 2018: http://www.popcorn.org/Portals/0/Documents/2017_Handbook/2017POPCORNHANDBOOK_FINAL_HERBICIDES_2-21-17.pdf

Table 2. Grain yield (% of control) at 7 and 14 days after application (DAA) of 10 different post-emergence herbicide treatments 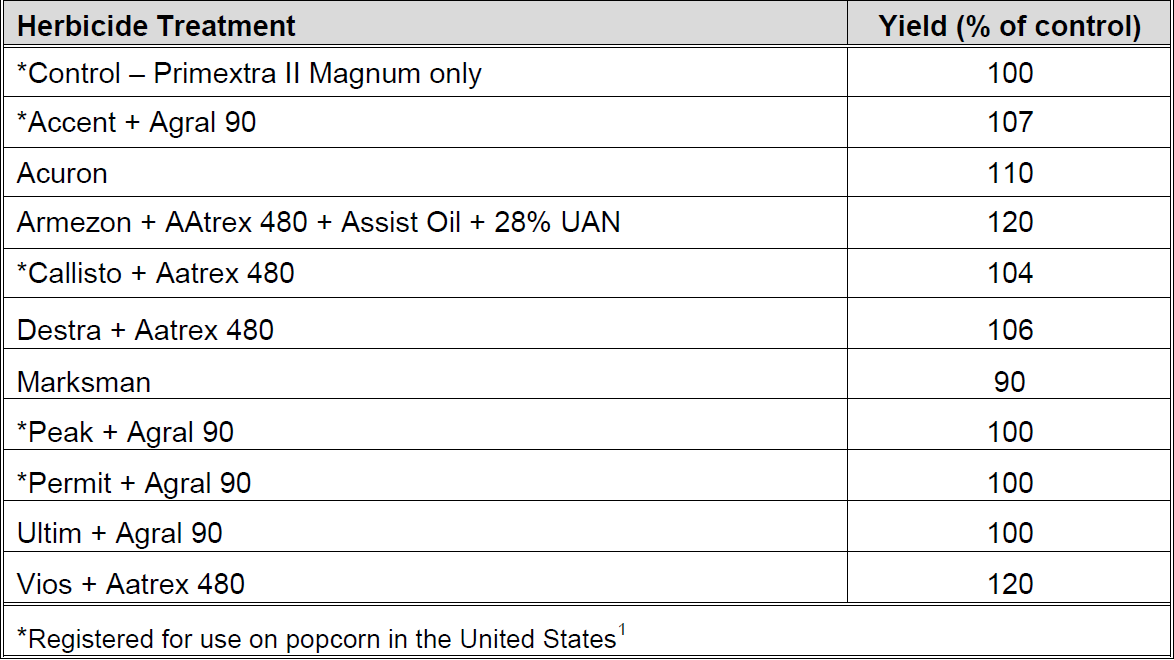