In Ontario there is a small acreage of specialty corn grown (e.g. white corn). The tolerance of many specialty corn types to common herbicides is largely unknown. Historically, if a field corn hybrid has shown susceptibility to crop injury after herbicide applications, the risk of yield loss increases. The purpose of this study was to evaluate white corn’s crop tolerance and yield response to the application of several common post-emergence herbicides. If there are herbicides that increase the risk of crop injury and yield loss, they can be avoided by farmers who grow white corn in Ontario.

White corn seed was sourced directly from a farmer in the Niagara region. The exact variety of white corn was never disclosed. It was planted on May 19th, 2017 at a seeding rate of approximately 22,000 seeds/acre at the Elora Research Station. Primextra II Magnum, a herbicide that is registered on many different types of corn and is considered a “foundation program” to provide early season weed control was applied on May 22, 2017 and prior to crop emergence. All post-emergence herbicides were applied on June 16, 2017 to white corn at the 6 leaf over stage of growth and within the critical weed-free period. This coincided with grassy and broadleaf weeds that emerged after the residual activity of Primextra II Magnum had dissipated being at the 4-6 leaf stage. The trial was designed as a randomized complete block with three replications. Visual assessments of crop injury in relation to the control were completed at 7 and 14 days after application (DAA). Grain was harvest on November 7th, 2017 and dried down to 15% moisture content.

Crop injury was greatest following the applications of Marksman and Ultim (Table 1). Marksman caused some “twisting” of corn plants (Figure 1) whereas Ultim resulted in a “yellow flash” of new leaf tissue emerging from the whorl. One month after application, there was no evidence of crop injury amongst any of the treatments.

Grain yield of all post-emergence treatments applied at the 6 leaf stage and following a pre-emergence application of Primextra II Magnum were higher than the control of Primextra II Magnum without any follow-up weed control (Table 2.). This demonstrated value in controlling weeds in this trial that had emerged during the critical weed-free period even at the risk of experiencing crop injury after the application of a post-emergence herbicide. Specifically, even though both Marksman and Ultim caused > 20% visual crop injury, they controlled or suppressed a number of the prominent grass and broadleaf weeds that had emerged. Generally speaking, grain yield mirrored the level of weed control provided by each of the post-emergence herbicides applied. 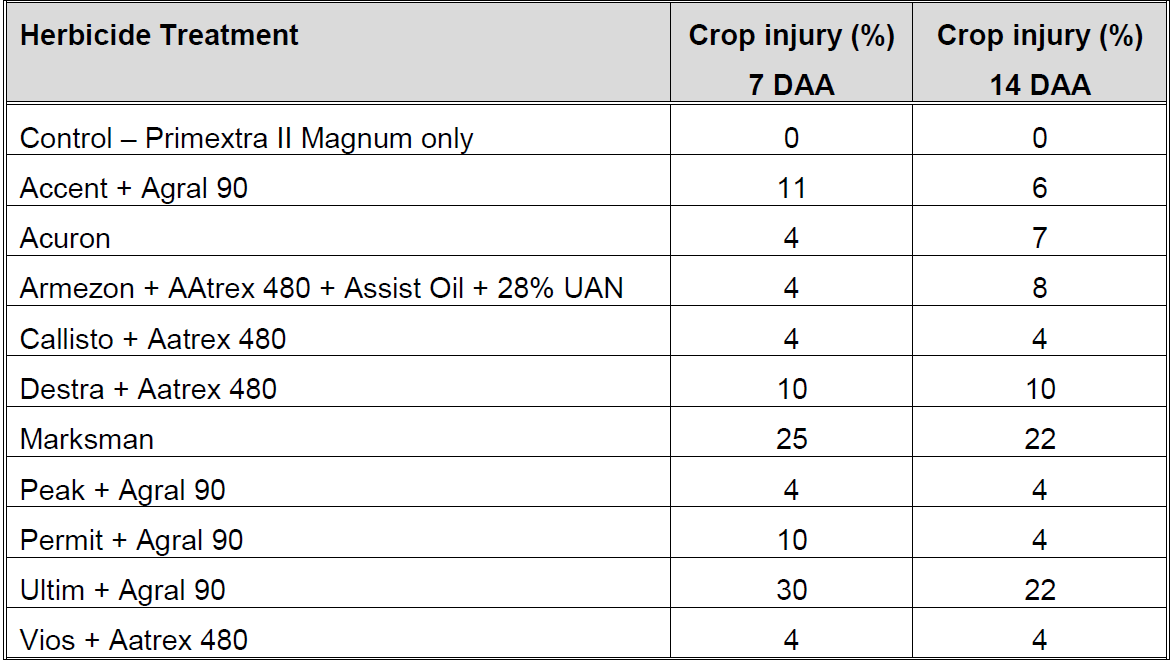 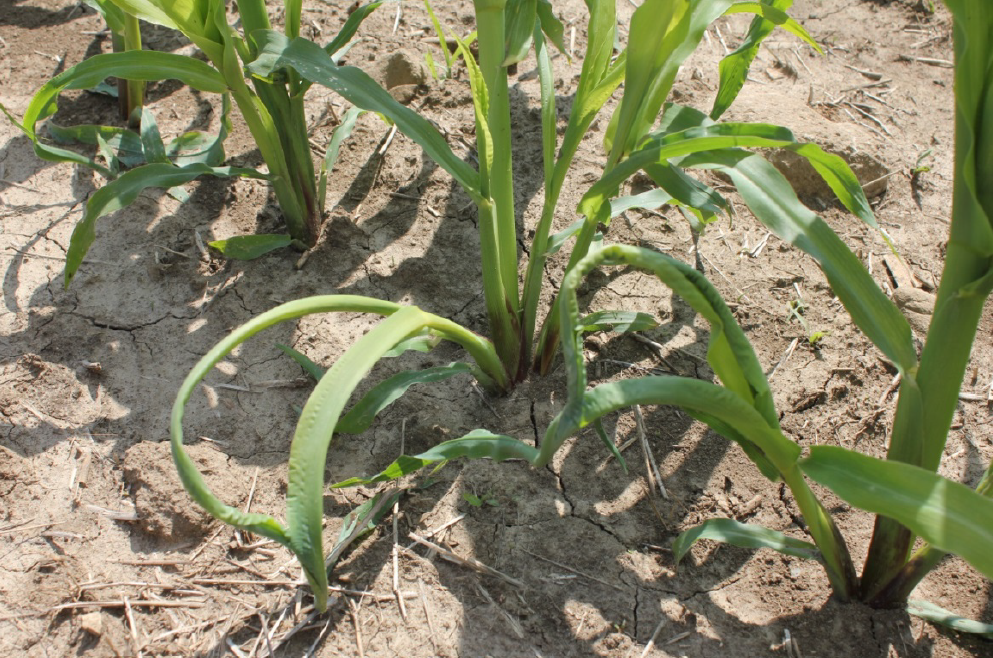 Table 2. Grain yield (% of control) at 7 and 14 days after application (DAA) of 10 different post-emergence herbicide treatments 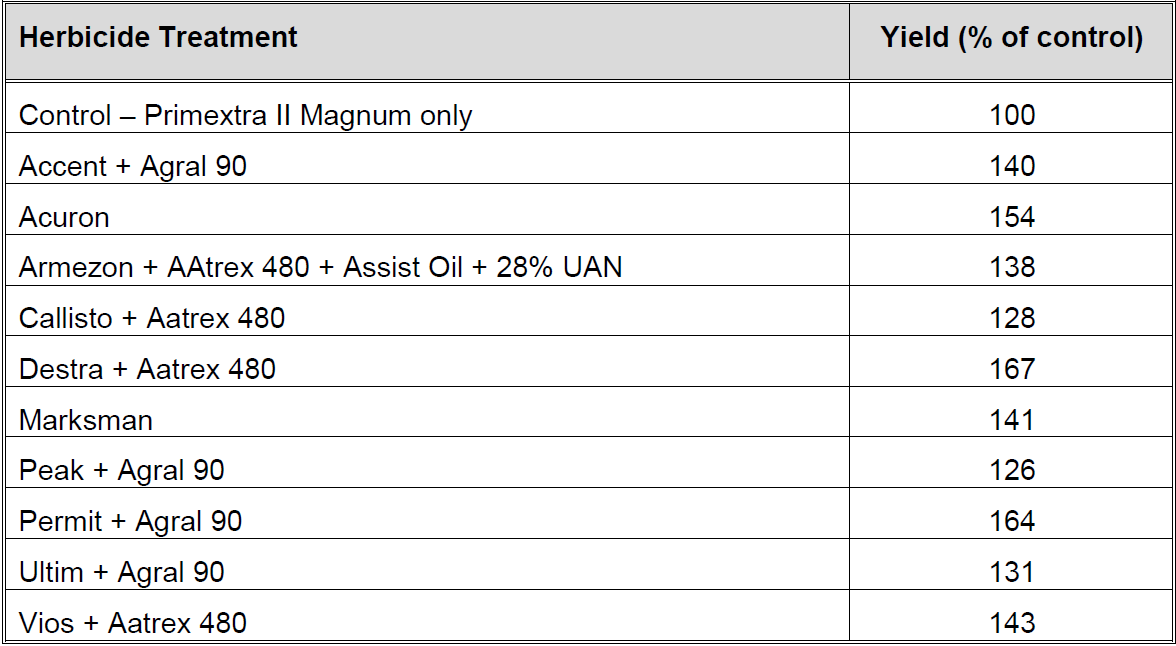 White corn visual injury was greatest following the post-emergence applications of both Marksman and Ultim. Regardless, grain yield was higher than the control where post-emergence herbicides were applied. This was likely caused by post-emergence herbicides controlling or suppressing the moderate amount of grass and broadleaf weeds that had emerged during the critical weed-free period and after the residual activity of Primextra II Magnum had dissipated. This demonstrates that the risk of crop injury from post-emergence herbicide applications may be tolerable provided the benefit to controlling the weeds outweighs the risk of potential yield loss from crop injury. In this 2017 trail at the Elora research station, there was a high enough population density of weeds emerging during the critical weed-free period that the benefit of control was greater than the risk of yield reductions from the crop injury observed.

This trail will be repeated again during the 2018 season.