To test late application of Nitrogen (N) to fit the timelier uptake period close to tassel as assessed in recent N uptake studies and application equipment methods. A New technology like the Y Drop™ (YD) from 360YieldCentre™ lets growers apply late-season nitrogen even up to tassel, and the joint Ottawa-Carleton, Dundas and Lanark SCIA’s goal was to evaluate this technology to ensure nitrogen is being used as effectively and as sustainably as possible.

10 farm locations in the Ottawa-Carleton, Lanark and Dundas counties, applied the 6 treatments (see Table 1), with 3 randomized replications of each treatments. Note: actual N rates at each site varied depending on the Grower Rate at each location.

Table 1: An example of the six treatments.

A: A base rate of 30-40 lbsN/ac at planting was established to aid in the calculation of Delta yield (difference in yield between low rate and higher rates of N applied) and MERN (Maximum Economic Rate of Nitrogen) values.

B: The Grower Split 75% with YD was to determine if using the YD or a late N Application, is more efficient (that is less N per bushel of corn), with a reduce N rate split compared to the normal Grower Rate (C).

C: Grower Rate is the rate traditionally used for corn production on the field chosen by the grower.

D: The Grower rate was split into 1) a sidedress application and 2) a Y-Drop application to test late applied N value at commonly used rates

E: Higher than normal, at 125% of Grower Rate applied once at sidedress timing was used as an additional benchmark to compare to late applications and to determine the individual site MERN.

F: Higher rate than normal at 125% of grower rate applied with YD was tested to assess the potential increase in yield against currently used rates, splitting this gives a measure of the advantage of the additional N when late applied.

VERIS® analysis was used at several locations to measure CEC, pH and Organic Matter to characterize the soils and segment the fields into management zones while enhancing our understanding of soil/nitrogen relationships (Figure 1). Soil samples were taken to verify and calibrate the Veris® analysis information. 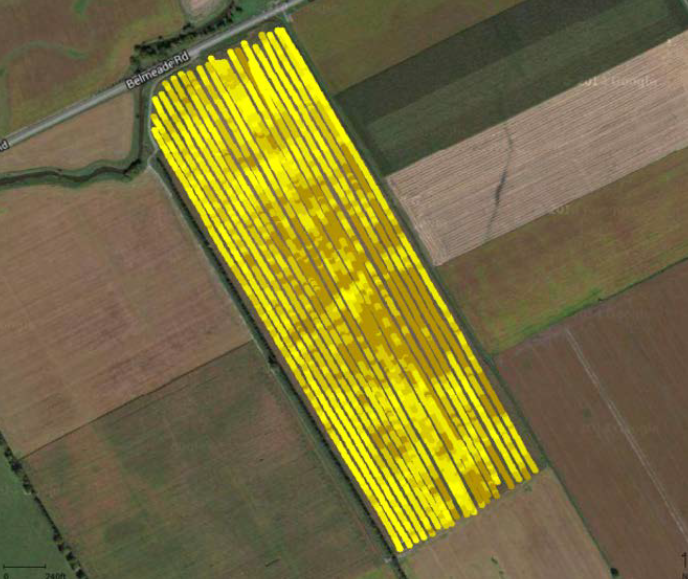 UAV (unmanned aerial vehicle) (Figure 2) maps were taken during the growing season to look for differences in treatments and field management zones. Note the starter only N strips in the field shown. Where available the “as applied” nitrogen application maps were used for tracking various tested strips. Pre-side-dress nitrogen test (PSNT) soil samples were taken from the Starter N at Planting Only (treatment 1) strips at each site. At harvest, yield monitors were used to collect continuous side-by-side yield data to compare different N rates and application timings across the field management zones. 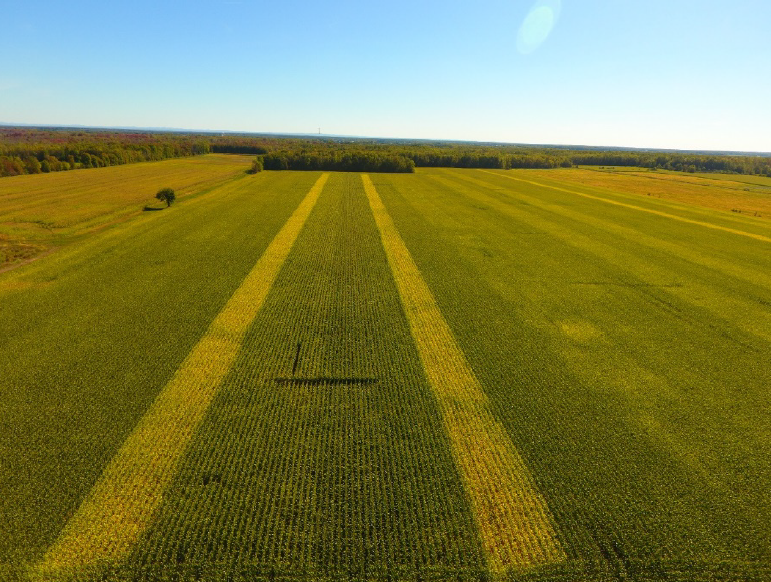 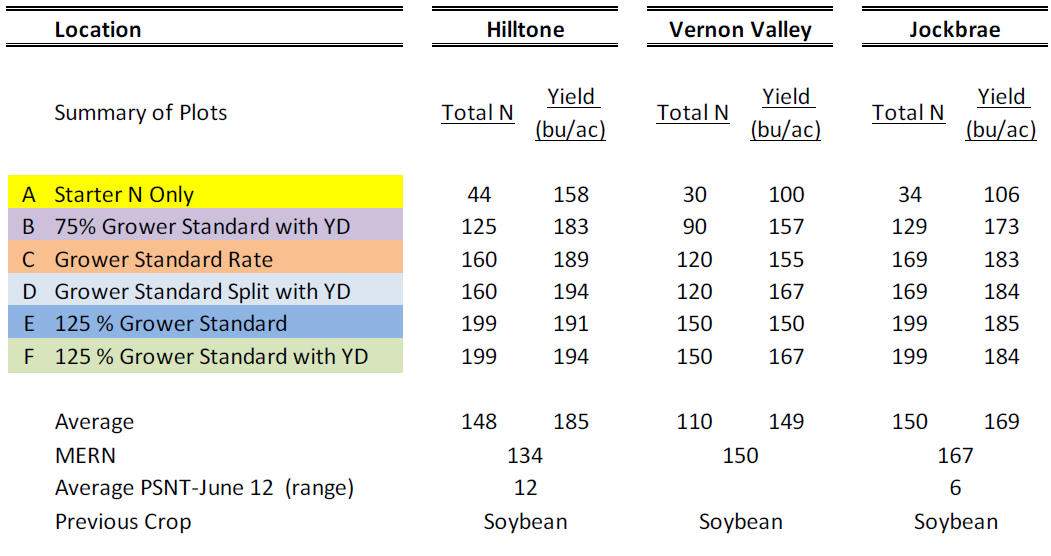 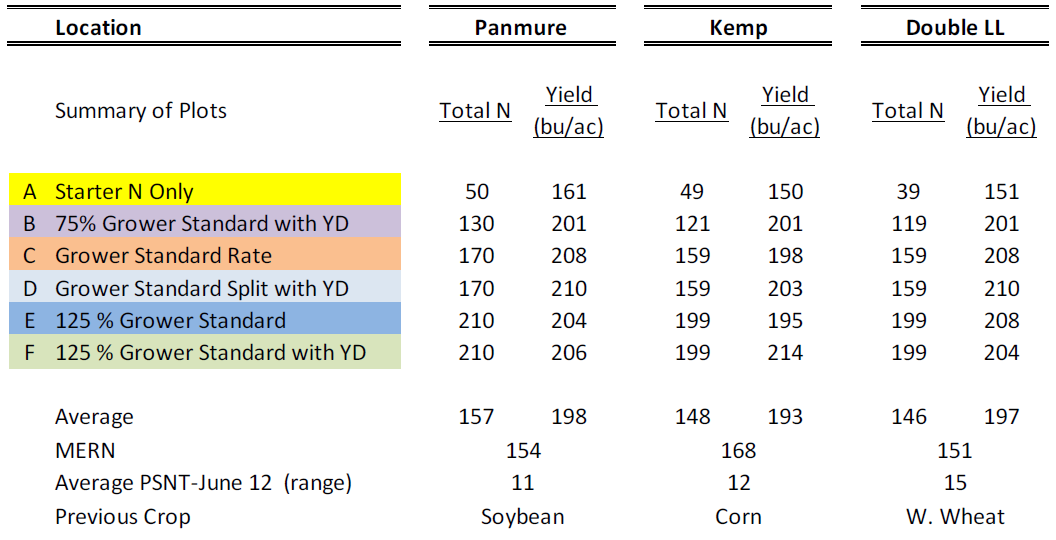 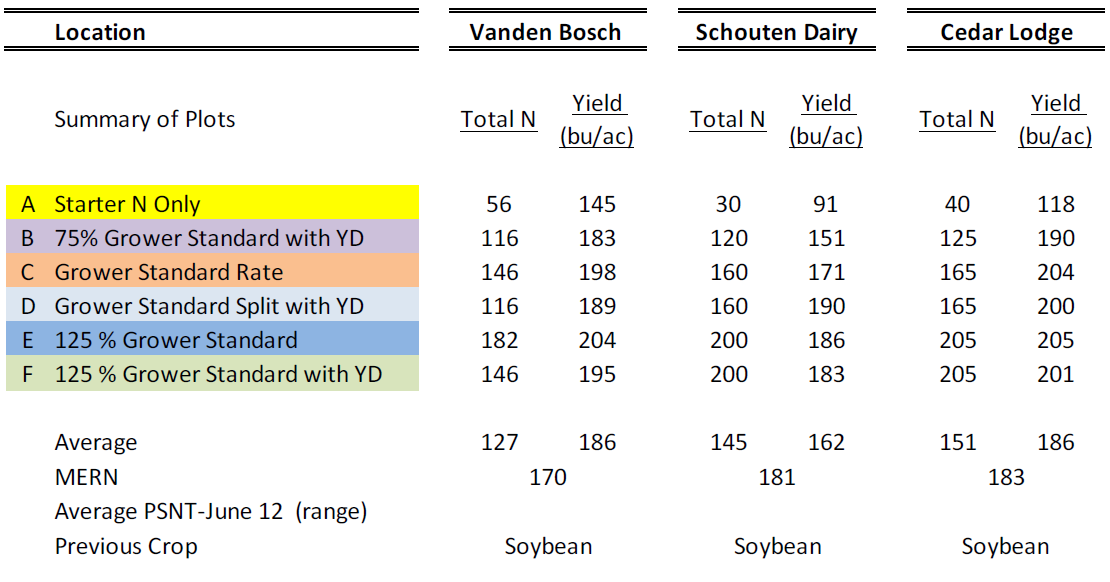 Growers are interested in learning more about economic N application in corn. However, variables are many and there is no one-size-fits-all for every grower, in every field, in every situation. N management has been and will continue to be an evolving process.
We found from the N Management in Eastern Ontario project that there is an average MERN of 120-140 lbs (and other findings we can summarize in background). MERN determination could be higher or lower due to wet weather, crop rotation or manure use. While these are useful and practical findings for eastern Ontario corn growers, these findings need to continue to be shared, implemented on-farm and refined. However, there are limitations to this finding – as it is an average. No grower has an average field with average yield potential, and average weather conditions (soil moisture) – and growers are not content with average yields. Growers are striving for above the average and as such need to make above average decisions. To do that, they will need more information, applied and gathered from their own operations.

More analysis of current data and additional supportive data will be needed for future application prescription technology to be applied in Eastern Ontario. We would propose further analysis looking toward opportunities within zone application to focus on value of additional N in different elevations and low and high CEC evaluated zones as determined by Electrical Conductivity (EC) testing systems. The question has not yet been answered as to whether Delta Yields help us determine where opportunities for N management advantages can be applied.
Taking the results and applying them to develop a useful zone management tool would be the ideal next step.

PDF - Environmentally Sustainable Use of Nitrogen on Corn (CLICK HERE)