Maintaining a healthy soil and organic matter levels and providing timely available nutrients, especially nitrogen, for an organically grown corn crop is a challenge, especially when there is no livestock manure in the organic operation. This study (2019) compared 4 different biostimulant products with and without municipally sourced compost on a silty clay loam to determine if biological stimulants would increase the nutrient availability to organic corn, and result in an economic yield response. Compost was added to most of the plots so that the biostimulants would not be used as a bandaid treatment applied at low rates just in crop rows.

Biostimulants are biological substances, microorganisms, and mineral compounds whose function when applied to plants or to the rhizosphere is to stimulate natural processes. This benefits nutrient uptake, improves nutrient use efficiency, provides tolerance to abiotic stress, and/or improves crop quality; all independent of its nutrient composition. (University of Minnesota)

Biostimulants can be living (i.e. microorganisms) or non-living (i.e. humates) and promote plant growth by improving the supply of primary nutrients to the crop. Biostimulants can include a large population of beneficial microorganisms including bacteria, algae, fungi and can help in various biological processes, such as N-fixation, solubilizing phosphorus and synthesis of growth promoting substances (plant hormones, acids, stress response, etc.,)

Biostimulants are added at relatively low application rates, and therefore would seem to have limited long-term impact on improving or maintaining soil organic matter on its own. To promote overall soil health, this study tried to evaluate whether the addition of biostimulants would improve corn growth and whether the its addition with compost would result in improved overall performance of crop growth while also providing macro and micro nutrients to the system.

A 10 acre organic corn field near Vineland in the Niagara region was selected for the first year of this study. Soil fertility levels were high (soil P >60 ppm and K >250 ppm). The field was divided into 20- 0.4 acre segments where 4 different biostimulants were applied in replicated treatments. Compost was applied to most of the field however a few treatments with only biostimulant or compost were also included.

Compost was applied and incorporated followed by in-furrow application of biostimulant into the seed row, followed by planting corn. The season was wet and corn was not planted until June 9th. Weed control included several passes of inter-row cultivation. Cover crop white clover was seeded between the corn rows with good growth by harvest. Variable growth due to wet areas across the field, between and within treatments resulted in the need for hand harvesting (October 29) in a portion of the field where growth was comparable across treatments. Combine harvest occurred a month later.

The four biostimulants that were evaluated in this project included:

HumaTerra Soil Enhancer – ¼ inch pellets of soil enhancers made from matured compost mixes and ingredients including protein and energy sources) It includes a chemical and biological profile shown in table 1 below. It was applied in-furrow to the plots at 48 lbs/ac. 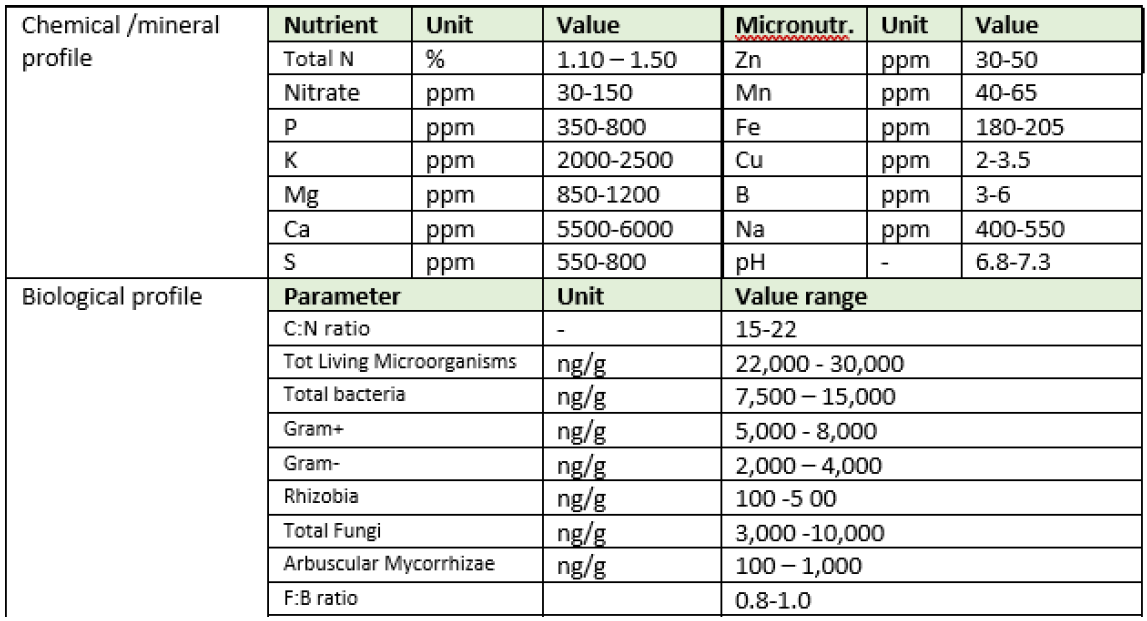 TekMac 7-4-1 – Good n’ Green: This product is derived from dried microbes (single cell proteins and blended with bonemeal, SOP, lanbeinte, sulfur with the option to blend with microbial product. The suggested application rates are 200 to 400 lbs/ac banded as corn starter, however in this project it was applied in furrow at 37 lbs/ac.

Sustane 8-4-4: This product is composed of aerobically composted turkey litter, feather meal and sulfate of potash. It is a high nitrogen organic fertilizer designed specifically for professional nursery and greenhouse applications. It is an organic 45 day slow release fertilizer. This product was applied in-furrow at 25 lbs/ac.

Sustane 4-6-4: This product is composed from biologically stable compost plus natural potash and feather meal. It contains naturally occurring beneficial bacteria and fungi. This product was applied in-furrow at 25 lbs/ac.

The results represent one year and one location of a study on a field with variable growth. Results suggest some positive impact from biostimulant use, but more study sites are required to determine if this is a consistent trend.

Corn was planted June 9, in 36 inch row spacings and was hand-harvested October 29 and machine harvested November 26. Variable growth in the field due to wet spots and population reductions due to several passes with interrow cultivation for weed control resulted in the need to hand-harvest in a uniform area of the field where all treatments looked their best. There was evidence of raccoon feeding and there was weed pressure from lambsquarters, pigweed, sow thistle, chickweed and witchgrass.

Plots were monitored and sampled at pollination timing. Soil fertility, soil nitrogen and plant tissue samples were taken at the area of the field where all treatments had the best growth and in the area where hand harvest occurred. Results are shown in Table 2, below, and indicate that there are no nutrient deficiencies showing up in any of the soil samples or in the plant tissues except for the treatment that had only humaterra biostimulant applied. The tissue N, P, K and S were was at the low end of the sufficiency ranges (shown in table 3) for those treatments. 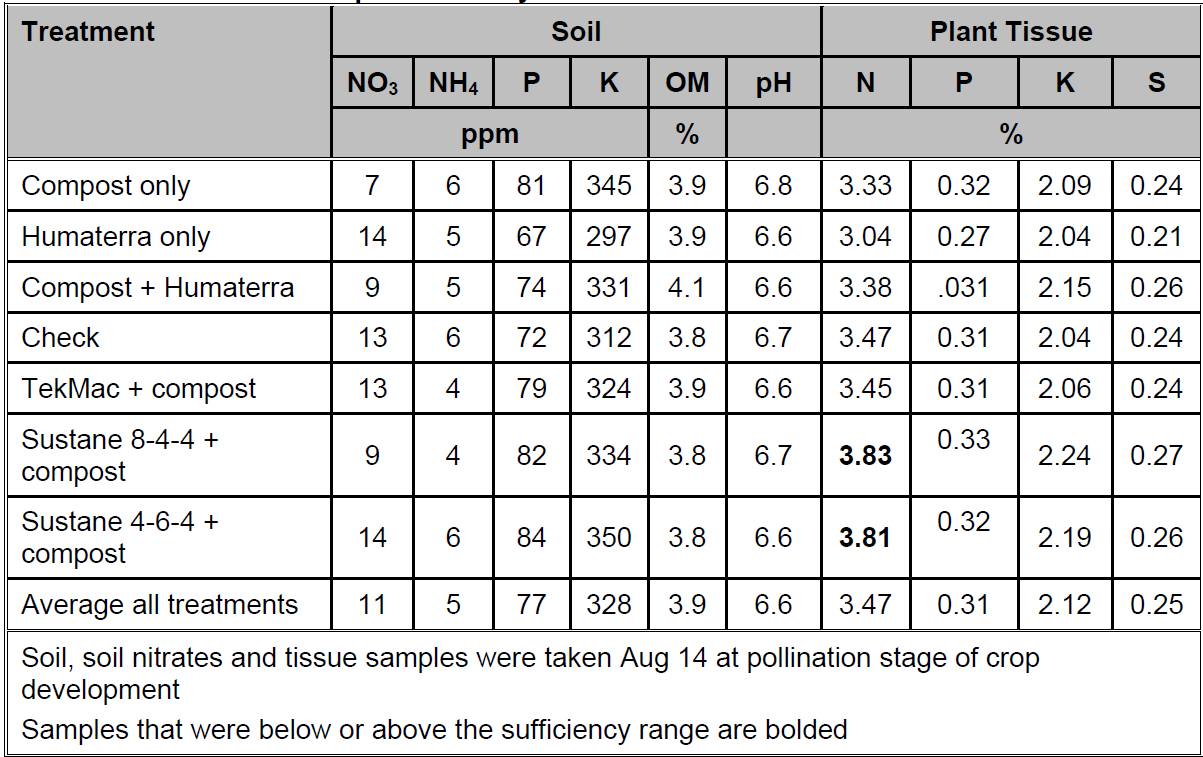 The soil fertility levels in the field were adequate to high at the start of the project, therefore it is not surprising that there are no nutrient deficiencies evident in the sample results, including the check treatments. Soil nitrate levels were below the sufficiency range for a 120 bu yield goal but since sampling occurred at pollination instead of side-dress timing, it is difficult to make any conclusion about supplemental N needs and the data can only be looked at for relative differences between treatments. Soil organic matter ranged between 3.7 and 4.2%, indicating adequate nutrient cycling potential for crop nutrient uptake. Rainfall was not limiting for most of the season although soils were dry in mid August. Except for the control treatments that had yellowing on the lower leaves, there were no visual differences between any of the treatments either in stage of growth or in colour of the plant tissue.

Table 4 shows the yield results for each of the products compared in this study (both hand harvested and full treatment combine harvested yields. 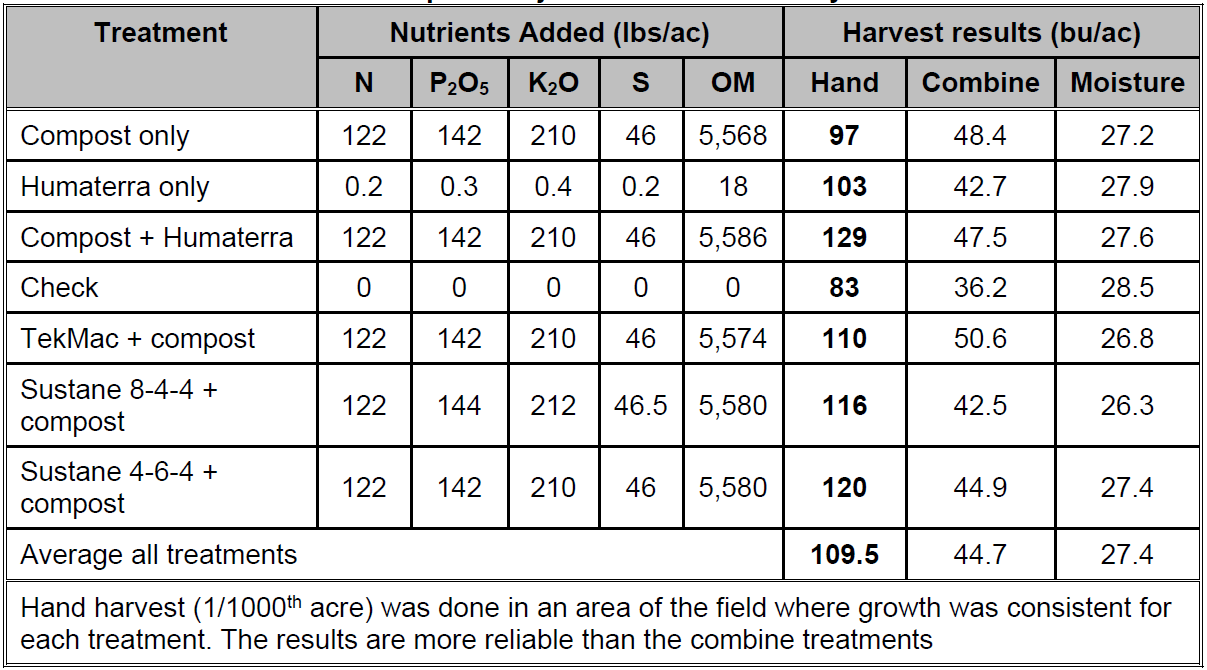 The hand harvested treatment yields are a better reflection of treatment difference than the combine harvested yields. Wet areas and weed pressure affected the plant density for the field length harvest yields. Due to the variability, as seen in the field growth shown in figure 1, there are no real conclusions that can be made from this study. A trend to be further investigated is that all the treatments responded to the compost and the biostimulant compared to the control. The combination of compost and Humaterra biostimulant performed best in the hand-harvested yield results.

Population counts and cob counts were done for each treatment at the location of harvest. Interrow cultivation for weed control reduced the overall corn population from 30,000 plants/ac to an average 20,000 plants/ac at harvest. At harvest plant population ranged from 12,500 to 30,000 plants/ac. The number and size of the cobs varied between treatments, especially the controls which also had the lowest yield with many small cobs (nubbins).

Biostimulants claim to improve soil nutrient availability and influence plant biostimulation and microbial proceses. Biostimulants also claim to improve soil organic matter however the miniscule amounts of product added to the soil compared to the relatively large pool already in the soil make this claim unlikely. However the outcome of increased soil organic matter may be driven by the enhanced plant growth and the greater demand for nutrient uptake that results as well as the role of soil microorganisms in that process.

Biostimulants have been shown to affect plant growth (e.g., root growth, root diameter, soil water holding capacity, and microbial activity) leading to increased nutrient availability to a crop. Most often responses in field trials have been variable due to field variability (weather, soil type, soil organic matter content, soil moisture, tillage system and crop rotation). Some research trials have added the biostimulant at V4 stage as a foliar treatment with promising results, since increasing microbial activity around actively growing root systems in poor soils would increase nutrient cycling. Biostimulants do not affect a fertilizer, but can increase the speed with which the nutrients are available to a plant. Studies done at the University of Minnesota resulted in products often being ineffective. At a field scale products that were used to increase enzyme activity or improve overall growing conditions did not perform differently than the control treatments. Field scale research results were better in dry growing conditions compared to when soil moisture was adequate.

Field variability has made the results from this study difficult to interpret. Economic benefit is difficult to assess in one year, but would be interesting to follow over a full rotation – especially with the higher return on organically grown crops.

Some researchers have commented that plant impact from biostimulants is 20 percent about the product and 80 percent about the management. It makes sense that biostimulants will have a greater chance of economic return in fields with poor soil quality compared to fields that have good rotation, regular organic amendments and cover crops. In organic agriculture the importance of nutrient cycling for good crop growth requires good soil management practices. Fields in organic production with good fertility levels, good organic matter levels and without moisture stress would be less likely to show a difference in nutrient uptake, or yield.

Microbial activity enhances nutrient cycling around plant roots. Microbial biostimulants that contain bacteria and fungi would need a food source when added to a field. When added at planting into a conventionally tilled field in the seed trench, it takes some time before the seed germinates. Depending on the microbial makeup (ratio of bacteria to fungi etc) and diversity the microbial activity may decrease without sufficient foodsource. Compost would provide some food source, which would not be the case in the control or the biostimulant-only treatment without compost. This would support the reduced nutrient uptake from the biostimulant treatment without compost.