In 2017, six corn fields were evaluated where co-operators applying a tassel-timing fungicide + insecticide application left check strips where no applications were made. Insecticide and fungicide products used were based on each grower’s choice. This allowed for a comparison of WBC feeding and DON vomitoxin levels under treated and untreated practices in these fields.

The amount of WBC feeding varied by field, ranging from 1-16% of ears in the untreated control plots having feeding damage (Table 1). Feeding in treated plots was very minor to non-existent (2% of ears or less). In most cases, feeding damage was minor and limited to a small number of kernels at the ear tips. In fields with a higher incidence of feeding (Fields 1 and 4), a portion of affected ears showed elevated levels of feeding damage such as side-entry hole feeding. The fungicide + insecticide application appeared to reduce WBC feeding damage at fields where feeding was present in the untreated plots.

From a visual ear mould perspective, most fields appeared relatively clean with the exception of Field 1 where some ear mould was evident (Figure 1). DON vomitoxin levels were relatively low across the six fields evaluated in 2017 with all samples testing below 2.00 ppm, and three fields testing Below Detectable Limit (BDL) for both treated and untreated plots (Table 1). In the three fields where the untreated control plots tested positive for DON, the fungicide + insecticide applications appeared to have lower DON vomitoxin levels.

Yield strips were not replicated at most fields, so should be interpreted with caution. In general, treated plots appeared to have yields that were slightly to moderately higher than the untreated plots. In field 5, the only trial with replicated yield data, there was no significant difference in yield between treatments.

Due to the fact that the only treatments tested were an untreated control or a fungicide + insecticides treatment, we are unable to determine the relative impact of either the fungicide or the insecticide alone on DON or yield responses. From a DON perspective, none of the fungicide products used in these trials were labelled for suppression of Gibberella ear rot, the ear mould that creates DON vomitoxin. While WBC feeding may increase risk of ear mould and vomitoxin infection, it is not the only factor. This was evident in Field 1 where ear moulds were present even in the absence of ear damage, and DON levels were present in both the treated and untreated plots. From a yield perspective, any feeding damage that was present was generally at very low levels, and any yield loss from such feeding would be expected to be very low. 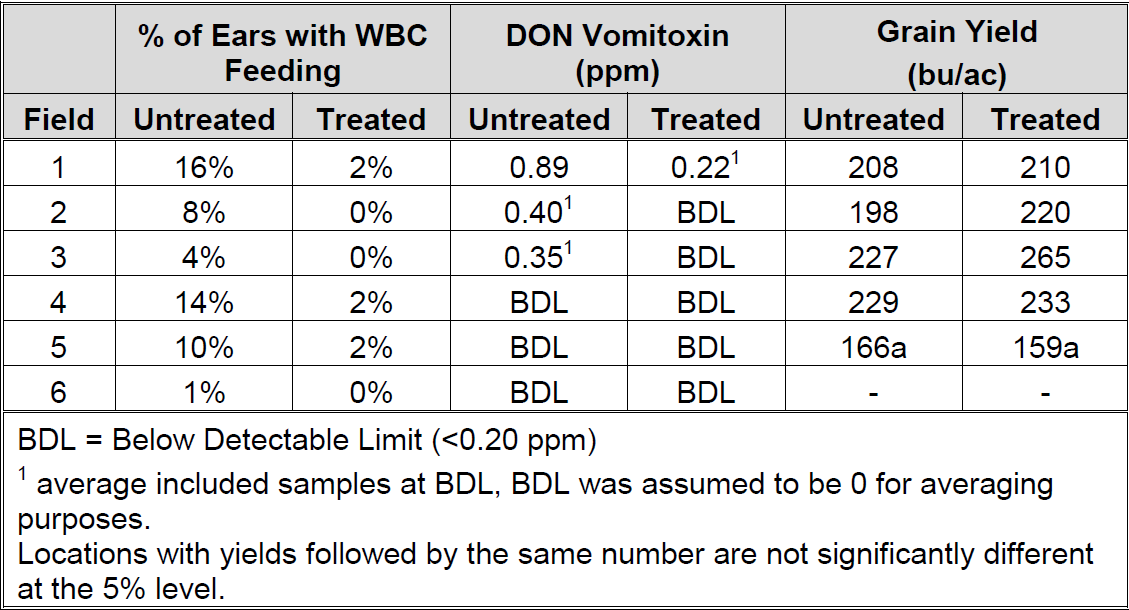 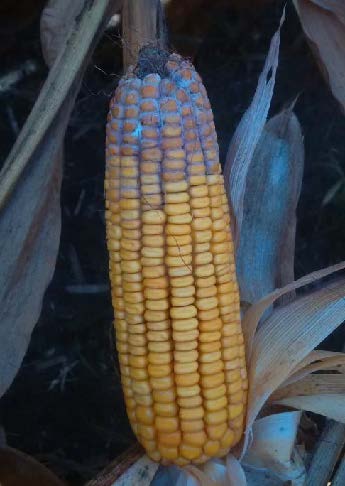 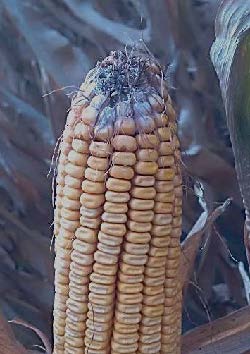 Scouting is recommended for WBC management decisions. The threshold for WBC is when 5% of plants scouted over a two to three week period have either WBC larvae or eggs present and the field is near or at tassel or silk. Because larvae can only feed on tassel, silk or kernel tissues, eggs or larvae present well ahead of tassel or silk emergence will starve and not survive. If a field is at threshold near tassel timing, the ideal insecticide application timing is considered to be when fresh silks will be present. This is when larvae migrate to the developing ears to feed on silks before entering via the silk channels. Generally, once tassels have shed their pollen in the corn field , WBC moths generally prefer to lay eggs in other later planted corn fields in pre-tassel to full tassel stage or edible bean fields if they are available. Those that have already entered the ear will be protected from an insecticide application.

Fungicides are just one of many tools such as available for helping to manage ear moulds. Others include good crop rotation, selection of tolerant hybrids, and timely planting. Only certain foliar fungicides have been shown to aid in suppressing ear moulds. The two fungicides labelled for Fusarium and Gibberella ear mould suppression in the OMAFRA 2016-2017 Pub 812: Field Crop Protection Guide include Proline® and Caramba®. Ear moulds can initiate infection through silk channel infection, or infection through ear wounds. Proper application timing (at fresh silk emergence but prior to silk browning) and good silk coverage are critical for reducing ear mould establishment on silks. While slightly later than the optimum timing for insecticide-only applications, this would also be the preferred timing for combination fungicide + insecticide applications.

Yields were not replicated in most fields, but in general yields for the treated plots were slightly higher than untreated plots. Lack of replication cannot determine if this was due to treatment effects or random variability.

This data represents only one growing season at six fields, several of which were treatments were not replicated, so should be interpreted with caution.

Sincere thanks to the OSCIA co-operators who provided treated fields with check strips for evaluating differences between treated and untreated practices, and to Ontario Soil and Crop Improvement Association Tier 1 funding for support of vomitoxin analysis costs.

PDF - Impact of Fungicide and Insecticide of DON (CLICK HERE)