Questions continue to come in regarding the impact of leaving wheat in the field to dry compared to taking it off at 18-19% moisture and drying it on farm in order to preserve quality. While the impact of rainfall events and leaving wheat in the field for a substantial amount of time has been documented in Ontario, we wanted to investigate the differences in quality in a year like 2019 when harvest was drawn out and whether taking the crop off early and drying it down proved to be more economical.

Samples of soft red winter wheat from the same field were harvested at two locations, Palmerston and Elora, in August 2019. The samples were collected once a week at the same time for 4 weeks to keep as much consistency as possible. 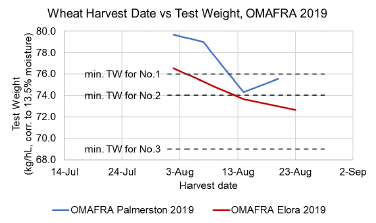 Figure 1: Impact of delayed harvest on test weight from winter wheat samples collected at Palmerston and Elora between August 2nd to August 23rd. 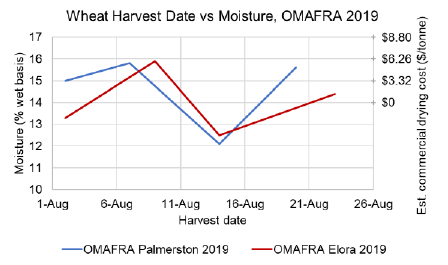 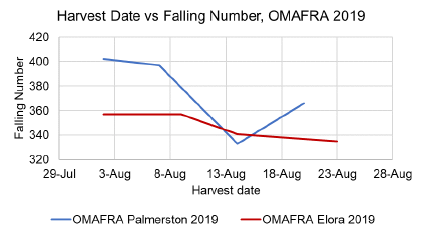 Figure 3: Impact of delayed harvest on falling number from winter wheat samples collected at Palmerston and Elora between August 2nd to August 23rd. 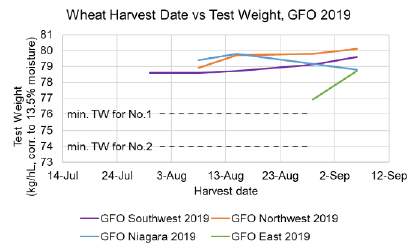 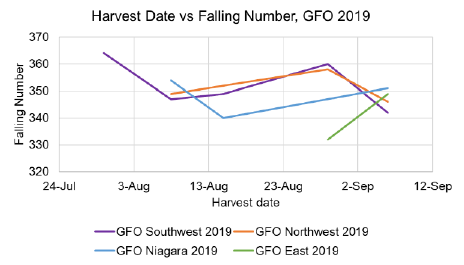 Similar to what was found through a research trial conducted by OMAFRA a number of years ago, the two biggest factors impacted in terms of quality were falling number and test weight. As winter wheat harvest was delayed, test weight at the Palmerston location dropped from 78.3 kg/hL on August 2nd to 73.7 kg/hL on August 20th (Figure 1). Test weight at the Elora location dropped from 76.7 kg/hL on August 2nd to 71.9 kg/hL August 23rd. While the test weights started at the grade 1 level at both locations, they did decline to a grade 2 level in Palmerston and a grade 3 level in Elora by the last harvest sample.

Wheat graded at No. 3 for light test weight would be subject to discount of $10/tonne on delivery. If the wheat were harvested slightly earlier, test weight would likely be higher and not subject to discount. However, earlier-harvested wheat is also likely to be wetter. At current (2019) commercial drying rates, wheat with moisture levels up to 17.5% can be dried for less than $10/tonne. Growers concerned about test weight should not be afraid to harvest tough wheat and pay for some drying, as it can be less costly than the discount for low test weight. Moisture levels for all harvested samples were below 17% (Figure 2), so drying would have been less costly than the grade discount for late-harvested Elora samples.

When we looked at falling number, we saw a similar trend (Figure 3). Falling number at the Palmerston location dropped from 402 seconds on August 2nd to 366 seconds on August 20th. Falling number at the Elora location dropped from 357 seconds to 335 seconds. While all falling number data collected was well above the 300 second threshold and test weights fell into the grade 2 category, this data re-confirms that by leaving wheat in the field longer we do see a reduction in quality and ultimately the grade producers are likely to get.

We then took all the data that GFO collects through its annual wheat quality survey to see if we could see similar trends across the province. In 2019, we saw very little impact of a delayed harvest on test weight across all samples collected (Figure 4).

Overall the impact of delaying winter wheat harvest in 2019 was not as great as one may expect. These samples were collected over the course of four weeks when, even if there is a delay, growers are most likely able to get their wheat off within a matter of two weeks. The difference in quality at Palmerston in 2019 would not cover the costs associated with taking the crop off earlier and drying it on farm or having it custom dried. However, the late harvested samples at Elora would have been less costly to harvest early and pay for drying, than accept the low test weight discount. Fusarium at both locations declined over the course of the four weeks and DON was below the detectable limits.

In a year with more frequent rainfall or in a scenario where FHB is present, then the difference in quality may have warranted the need to harvest early and dry down the crop on farm to avoid the continued growth of FHB. Discounts for sprouting and FHB can quickly become very expensive. In years where FHB or sprouting risk is high and/or growers are concerned about particular fields, harvesting a clean field early and paying for drying is preferable to delaying harvest and paying significant discounts. Growers should speak with their buyers to confirm discount rates and drying charges.

Thank you to Mike Holzworth from C&M Seeds and Nick Wilker from the University of Guelph for harvesting the weekly samples for us and to SGS labs for completing the analysis.