The objective of this project is to investigate and determine farming practices that allow Relay Cropping Wheat and Soybeans to have a consistent net economic return higher then either crop grown as a monocrop.

Sites were established with cooperators in Northumberland, Huron, Middlesex counties. Winter wheat was planted at traditional timings in fall. Row spacing was adjusted to accommodate unseeded rows of wheat at various widths, 14, 21, 30’,etc. Most of the plots were twin row wheat and 30” soybeans configuration. Wheat was managed as normal. In the spring of the following year, soybeans were planted into the empty rows within the wheat fields at traditional soybeans planting timing.

The wheat was left to mature as the soybeans began to develop. Wheat was harvested either using traditional methods, or where the combine was equipped with mountable plates the pushed down the soybean plants as the combine head harvested the wheat.

Once the wheat was harvested with considerable stubble length, the soybeans were left to mature and combined normally.

The yield results from this project varied significantly over the 3 years that it ran and are shown in Table 1. There were some exceptional yields and some poor yields. There were also several sites with incomplete data. For the final analyses only the sites with full data will be used, except the Cobourg 2019 site which had significant disease pressure in the wheat creating an outlier to the data set. It can be seen in Table 1 how consistent the wheat yield drag was when growing a relay soybean crop. It can also be seen that the relay soybean yields were extremely lower than the check plots.

The real focus of this project was to analyze the economics of this cropping system vs a regular wheat and soybean crop. In this report comparing relay wheat and soybeans will only be compared to a regular crop of wheat, as the difference in gross revenue per acre were too great.

OMAFRA custom farming rates were used minus 10% to achieve a more realistic grower number. These numbers can be seen in Table 2 along with the added inputs. Now that these numbers are established, and an average market price over the 3 years for the commodities was set, the gross revenue per acre can be calculated for each scenario and shown in Table 3. In Table 3, only sites with complete data was used, as the other sites there would have been too many estimations to give an accurate number. 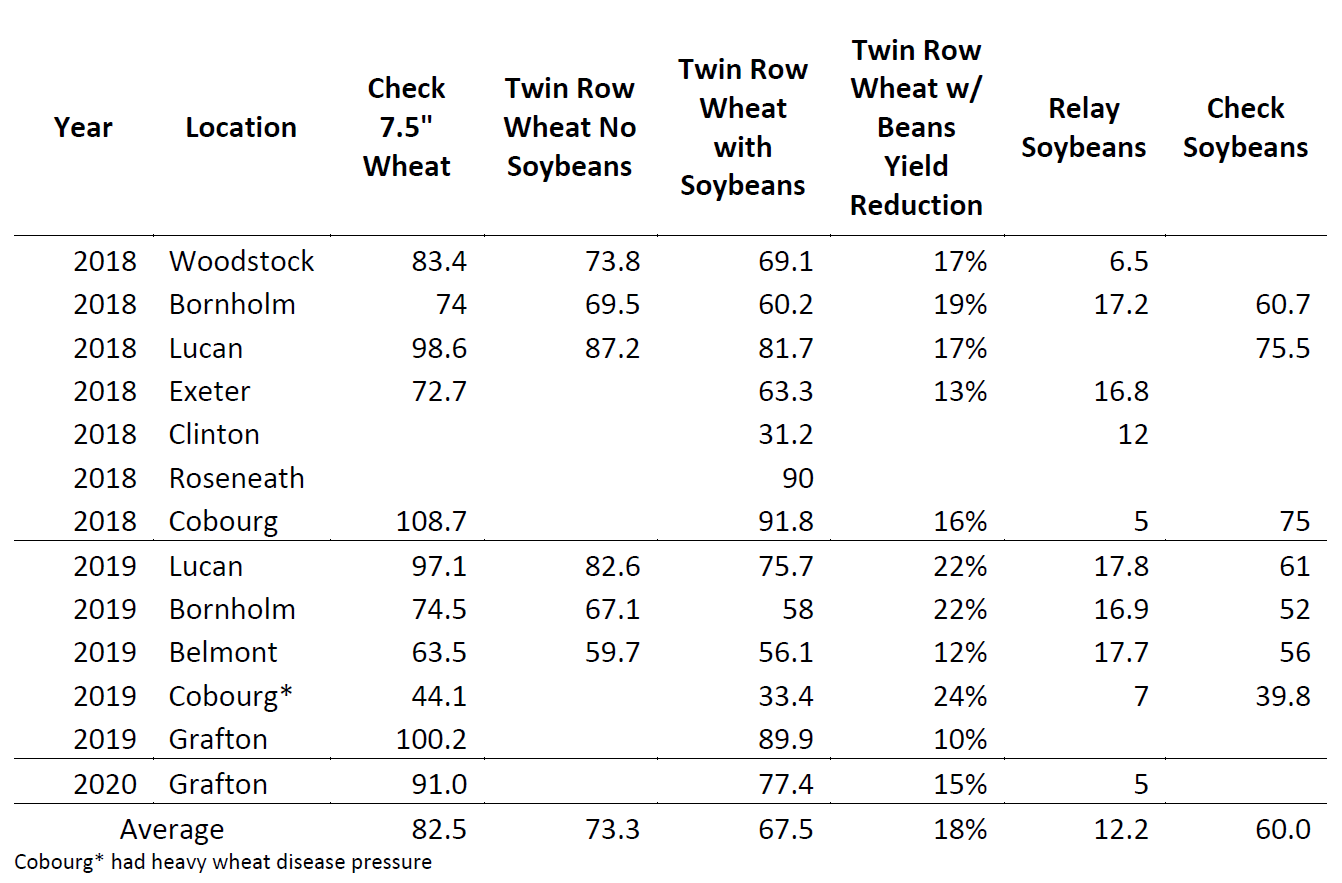 The general consensus amongst the participants was that the relay wheat yield was acceptable, but the relay soybean yields just never lived up to expectations. The soybeans in these trials just never seemed to have any second flush of growth once the wheat was harvested. There are a few reasons hypothesized that could be the culprit including lack of late season soil moisture, weed pressure, excessive soybean plant clipping and damage during wheat harvest, heat units, maybe selecting the wrong variety traits and the wrong variety maturity groups.

The purchase of the crop dividers did reduce soybean damage significantly, but there was still some clipping of the soybeans.

If the project was to continue with, my suggestions would be too look at earlier planting, an extra long maturity soybean, and possibly different row spacing and configurations.

Where the crop dividers purchased for the project were used, the damage to the soybeans was reduced. There is some installation time with the equipment that some might not feel worth the time.

The project while useful to answering some perennial questions about enhancing productivity per acre, the results did not inspire the participants to continue tweeking the system. If the project was to continue with, my suggestions would be too look at earlier planting, an extra long maturity soybean, and possibly different row spacing and configurations. Weed control in the soybean rows can also be a problem that would need more attention in any further investigation of this practice.

The project team wishes to recognize the farm cooperators along with Dupont Pioneer, Northumberland Grain and TCO Agromart for their important contributions to the project. We further thank OSCIA for supporting this effort with a Tier 2 Project Grant.