The overall objective of this two-year project is to determine methods to manage a cereal rye cover crop to achieve multiple benefits, while minimizing any negative effects on crop yield. The project has two components: 1) to evaluate spring rye termination timing and its effects on nutrient uptake, weed abundance and soybean development and yield, and 2) to evaluate a cover crop-based organic (or herbicide-free) no-till soybean production system using a roller crimper to terminate cereal rye. This report includes information on the first component. For information on the second component, refer to “Maximizing cereal rye cover crop management for multiple benefits: Cover crop-based organic no-till soybean production”.

Cereal rye is a relatively inexpensive cover crop that provides a variety of benefits including erosion reduction, weed suppression, nitrogen scavenging and soil organic matter building. It is very winter hardy and in many cases is the only cover crop option to seed after grain corn or soybeans in Ontario.

The potential benefits of cereal rye can be maximized by allowing longer growth in spring. By delaying termination of cereal rye to the time of soybean planting, biomass can be greatly increased. In wet springs, the actively growing rye may also help dry soil by transpiring moisture. There is, however, some risk associated with delayed rye termination. Greater rye biomass can delay soil warming, dry out soil excessively in dry springs, affect the crop stand and slow early-season soybean development.

In these trials, replicated and randomized strips were used to evaluate the impact of different termination timings on cereal rye biomass, soil nitrogen, weed abundance, as well as soybean population and yield.

Four on-farm and two research stations trials were completed in 2019. They have been compiled with data from four additional on-farm trials conducted in 2017 and 2018. There were two main treatments: cereal rye or no cereal rye cover crop. Within the cover crop treatment, there were two sub-treatments: early termination of rye (approximately two weeks before soybean planting) and late termination (day of planting, also referred to as “Plant Green”). Treatments were replicated 2-6 times depending on the site and randomized throughout the plot area. Background site information is provided in Table 1.

No tillage was performed at any of the sites except for St. George 2017, where minimum tillage was done on grain corn residue in fall of 2016, and Elora 2019, where a culti-packer was used to prior to rye seeding. Table 2 describes soybean varieties grown, seed treatments and herbicides used.

Cereal rye biomass was sampled at the time of termination from multiple locations within each strip and samples were oven-dried to 0% moisture and weighed. Sub-samples of dry biomass were submitted for nutrient analysis.

Soil samples for soil nitrate (NO3-) were taken from a depth of 0-12 inches within each treatment. Samples for early terminated and late terminated strips were taken on the same date at each site (approximately the date of soybean planting) and kept cool and then frozen until delivery to soil test laboratory.

Average plant stand values were calculated from counts at multiple locations in each strip at each site.

Yield was determined by weigh wagon, well-calibrated yield monitor data or by combine scale at research station plots. Values were adjusted to 13% moisture.

Weed abundance (e.g. number of weeds within a square metre) at the beginning of the critical weed-free period in soybean (V1) was counted at the Elora and Winchester Research Station (University of Guelph) as well as farm fields in Morrisburg, Wroxeter and Kenilworth, Ontario. 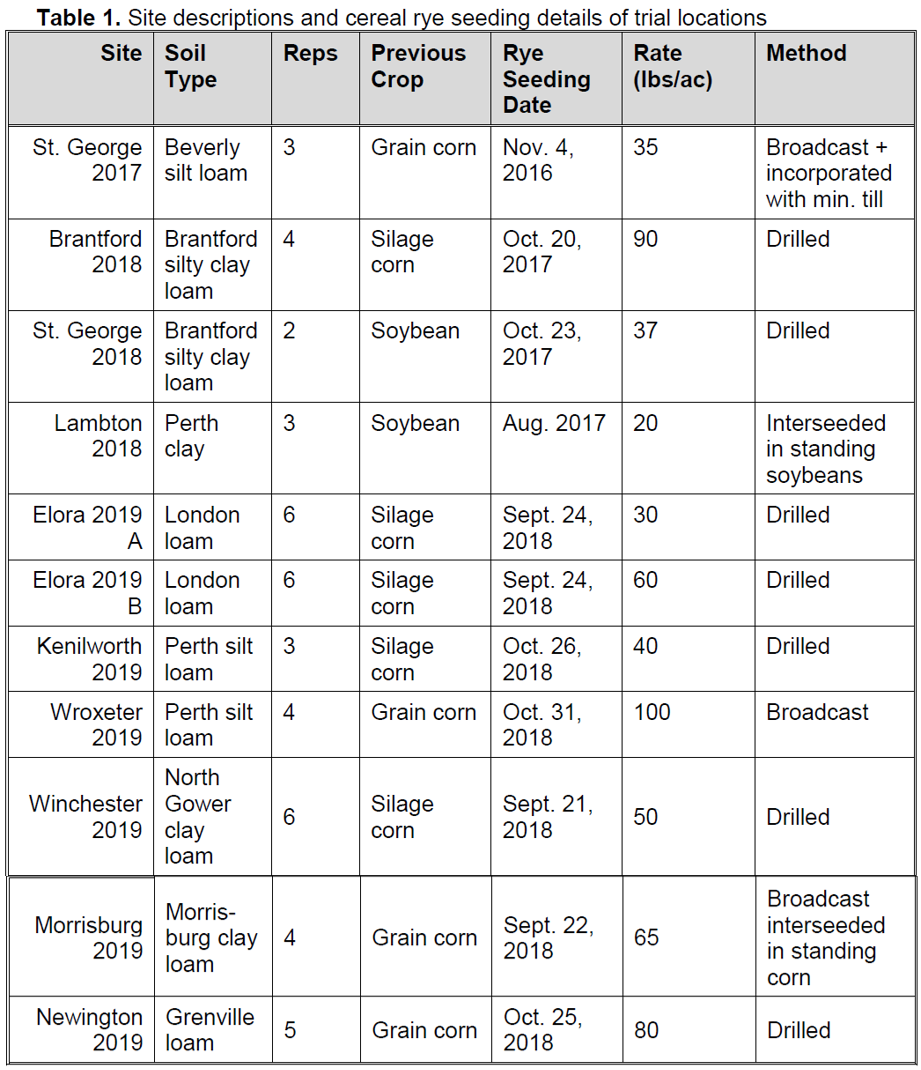 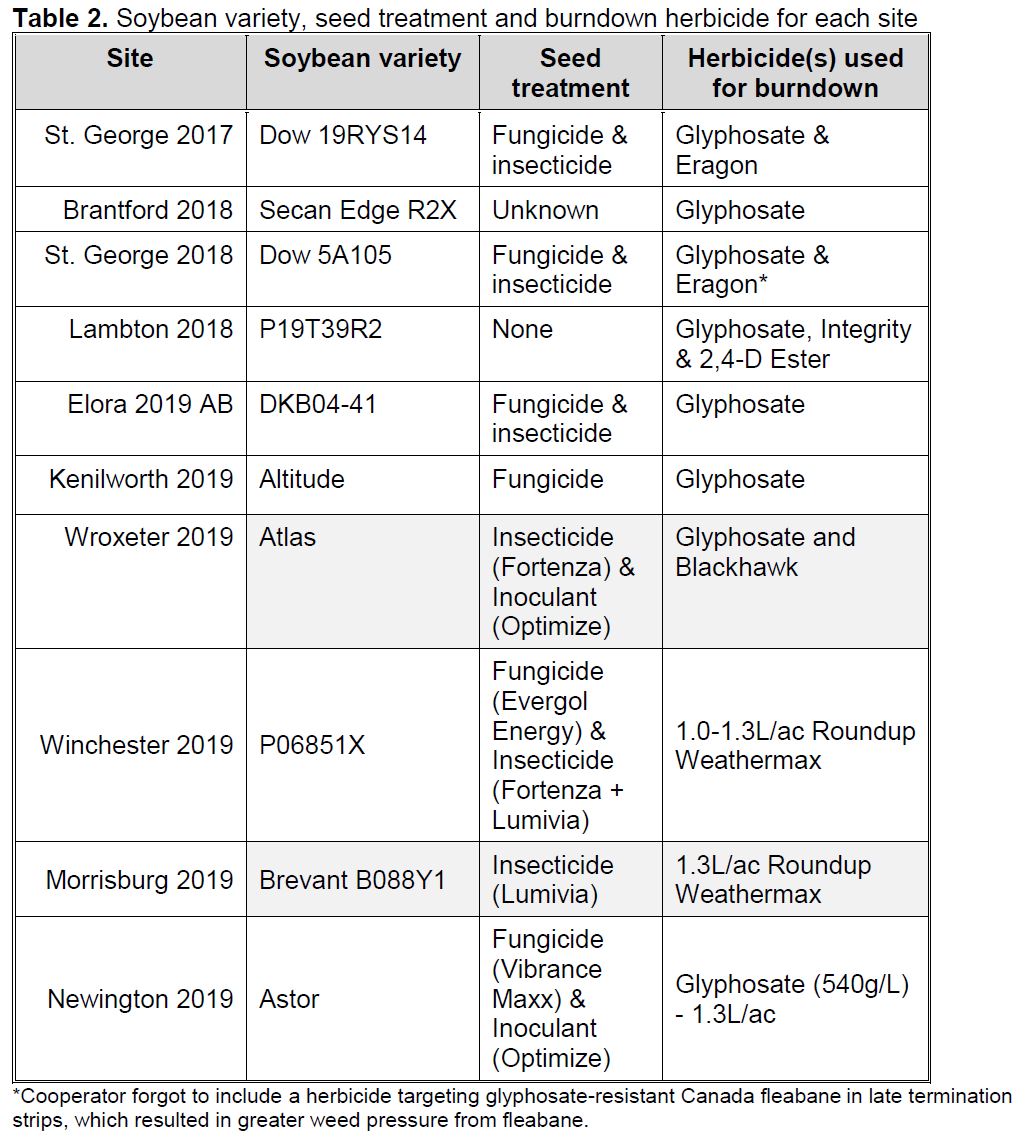 Rye growth accelerates in May

Across ten sites, rye biomass increased on average by 2.9-times when terminated at time of soybean planting compared to ~2 weeks prior (Table 3). Extra biomass contributes to soil organic matter, soil structure and provides a longer-lasting mulch.

Nitrogen taken up by rye is released slowly over the season and is less likely to be lost to the environment through denitrification or leaching. In cases of high N uptake, it may also play a role in weed suppression by reducing soil availability. Since soybeans fix their own nitrogen, moderate uptake is unlikely to negatively affect the crop.

Delaying termination of rye comes with some risk. Soybeans stands were reduced at some sites (Table 4). It’s important to plant into moisture and ensure that the seed trench is closed. Also, if conditions are very dry leading up to planting, terminating rye early can avoid even drier soil.

There was no difference in soybean development between no rye strips and early termination strips. Soybeans in late-terminated, higher biomass rye, however, tended to have delayed development. At the Brantford, Lambton and Elora sites, plants were consistently one growth stage behind in the “plant green” plots relative to the early termination strips (Figure 3). Soybeans are adaptable, to a point, to reduced stands and moderate delays in development. At the Brantford 2018 site, for example, despite delayed early season growth, soybeans planted green into rye had an equal or greater number of pods per plant and seeds per pod compared to those in the early-terminated rye (Table 5).

Soil moisture was measured at 2-inch depth, mid-row, in each of the treatments at the Elora Research Station (plot B) from late April until harvest. Figure 4 shows the differences in soil moisture in spring in the lead-up to planting. During this period, soil in the rye treatments was wetter than the no-rye control. The strips with early terminated rye were intermediate in moisture content.

The difference in soil moisture was likely due to reduced evaporation from the soil underneath the rye. As the rye grew rapidly and headed out, however, it began transpiring more water, which would have helped dry out the soil. The residue from the early terminated rye likely contributed to slightly wetter conditions than the no rye control. In a dry spring, it is quite possible that the soil with the late terminated rye would have been drier than the no-rye soil.

After planting (June 12), soil moisture levels remained highest under the late terminated rye (Figure 5). The rye mulch on the soil surface helped to reduce evaporation and maintain higher soil water content following rainfall events. This was important from late June to mid-July, during which time there was no rainfall at Elora. The elevated soil moisture in the late termination treatment remained higher than the other two treatments throughout the summer.

Overall, during the first year of this study, there was a trend towards lower weed abundance at the beginning of the critical weed-free period in soybean (V1) planted into the cereal rye treatments (Figure 8). Weed abundance was the lowest in the late termination treatments, which is predictable given that rye termination with glyphosate was applied later than the other treatments. It should be noted however, that weed abundance was high enough in all treatments to negatively affect yield if not controlled, so cereal rye is not going to replace other methods of weed control but can be a tool to improve the performance of other weed control methods by reducing the weed population.

There appears to be little downside to the incorporation of cereal rye ahead of planting soybeans as it relates to weed abundance. In a worst-case scenario, the cereal rye does not reduce weed abundance, but in a best-case scenario abundance is reduced and pressure is taken off of other weed control tools (like herbicides) as there are less weeds to control.

Soybean yield varied from a low of 50 to a high of 69.5 bushels/acre across all sites (Table 6). There was a statistically significant difference in yield between early and late termination at only one out of ten sites. At the Elora 2019 site, the yield difference was almost certainly due to plant stand damage caused by roller crimper activity in wet conditions on the small plots. Otherwise, yields between early and late terminated rye treatments did not differ. 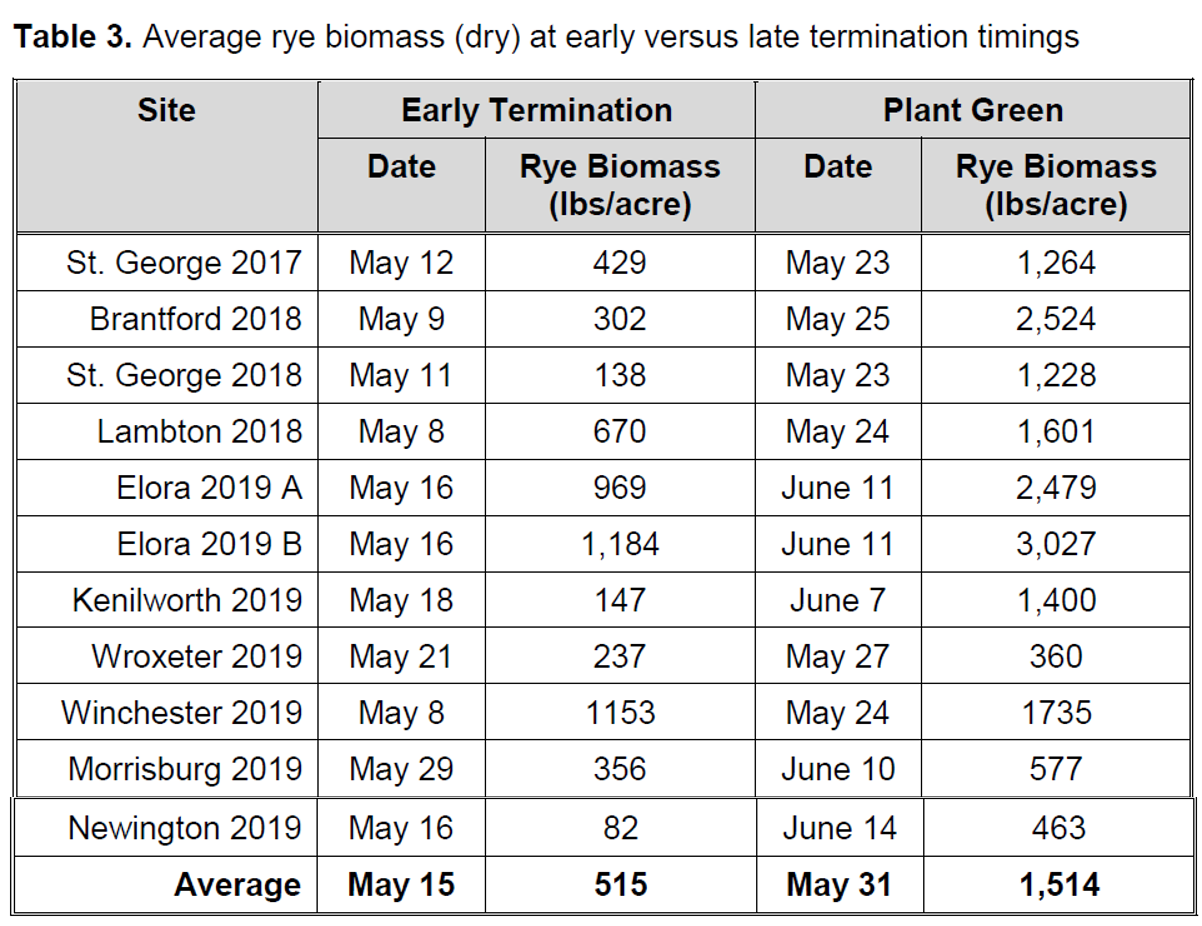 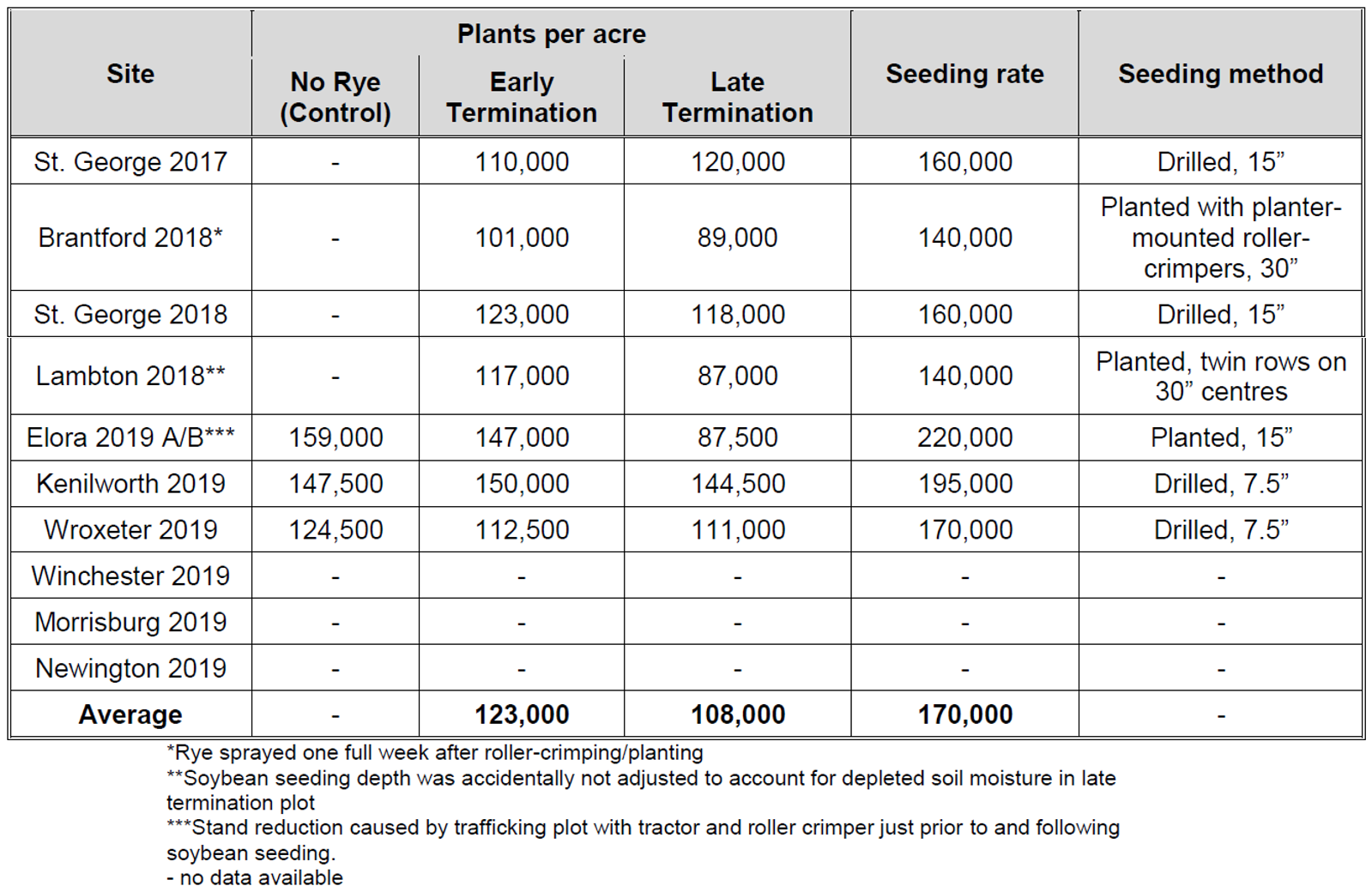 Table 6. Summarized yield results from all sites. Statistically significant differences in yield amongst treatments at each site are shown by different letters. 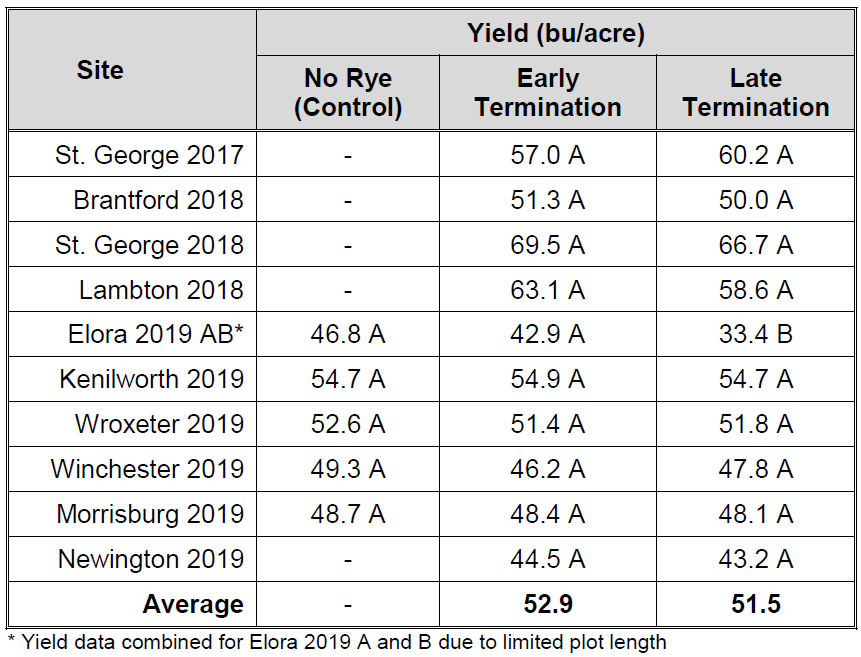 Figure 1. Cereal rye strips at the Kenilworth 2019 site shortly after early termination (May 18; left) and just prior to “planting green” (June 7; right) 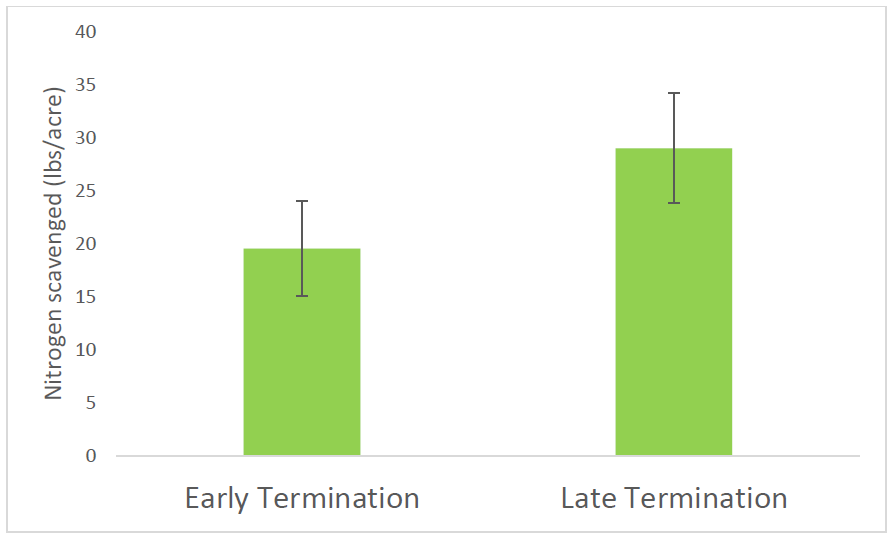 Figure 3. Soybeans at the Brantford 2018 site on June 26 (left) and the Lambton 2018 site on July 31 (right), where soybeans planted into early terminated rye were taller, greener, and one growth stage ahead

Figure 4. Soil moisture at 2-inch depth in all treatments at the Elora Research Station: no rye control, early terminated and late terminated rye (mean of four replicates per treatment), May 7-June 11, 2019 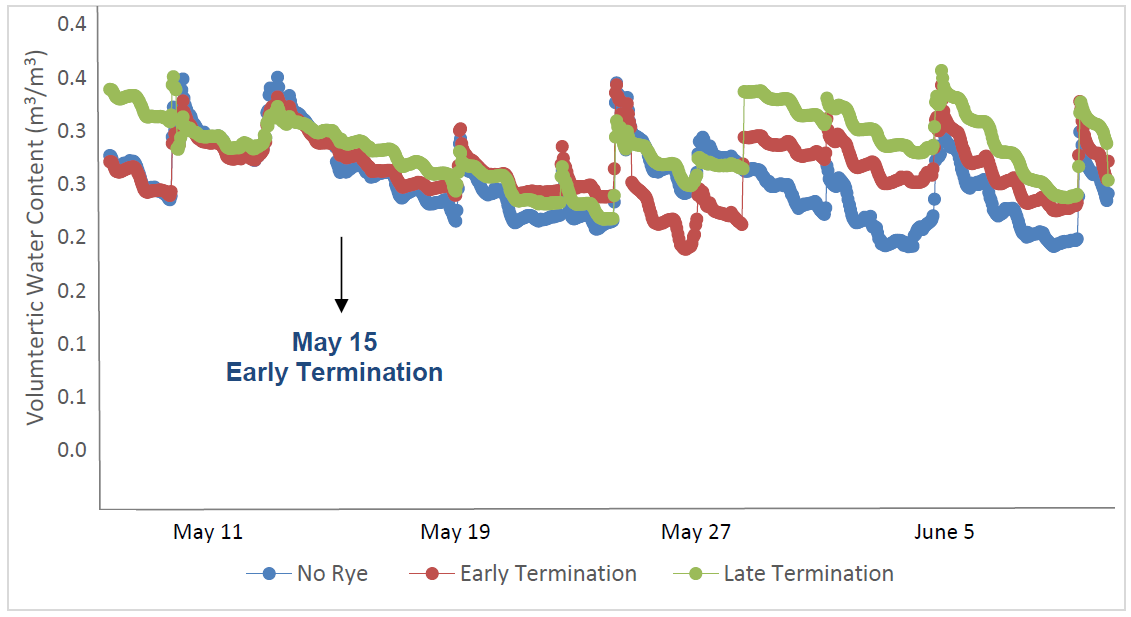 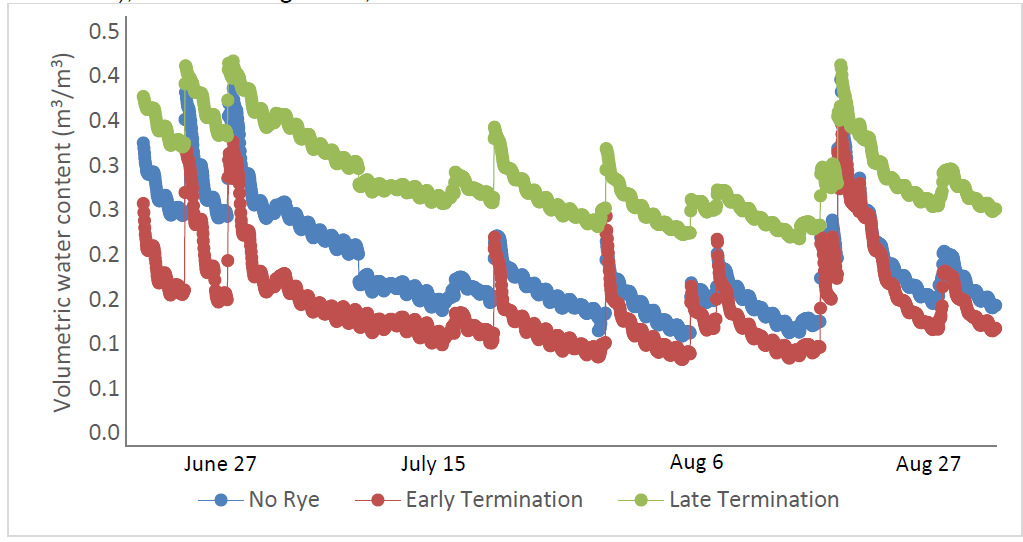 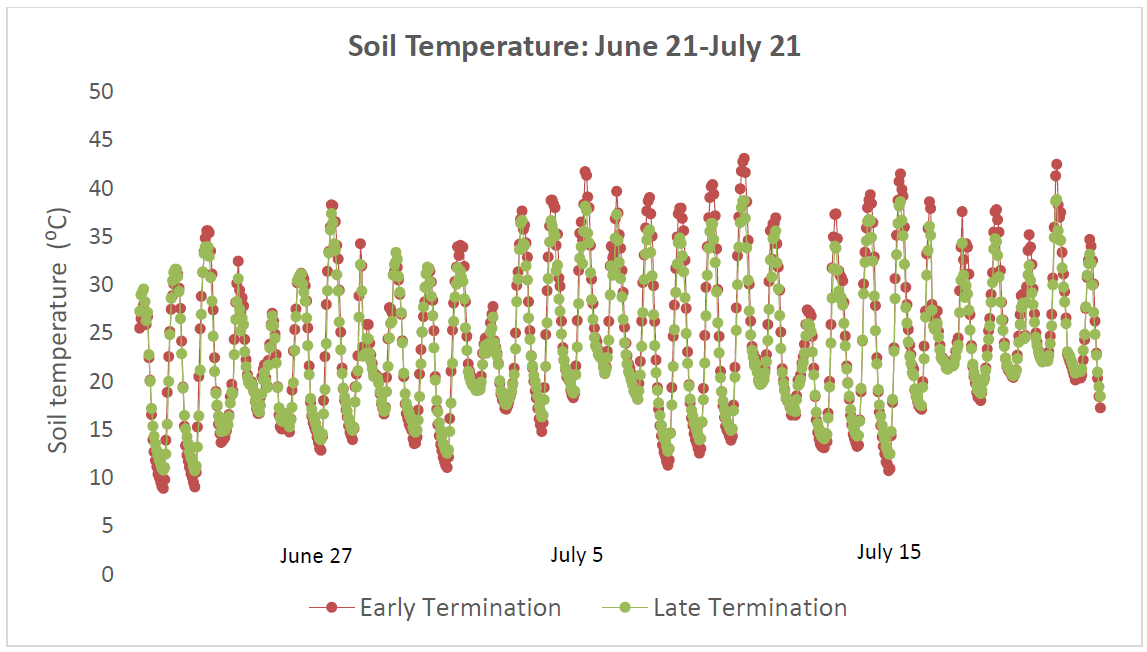 Figure 8. Average weed abundance (plants/m2) across 5 Ontario locations at the beginning of the critical weed-free period of soybean (V1)

Making sense of the numbers

The following lessons have been learned:

There is no doubt that allowing an extra couple of weeks of growth maximizes the soil benefits of a rye cover crop: more biomass, more time with active roots and a lasting mulch. There may also be some weed suppression benefits. It’s a new practice, however, and still needs some fine-tuning.

If you are new to rye as a cover crop, gain confidence by terminating it a couple of weeks before planting soybeans in
the spring. If you’re more experienced, leave a couple strips to be sprayed after soybean planting this coming spring and see how it works on your farm. Have a goal in mind – is it weed management, building organic matter or overall soil health? And finally, be flexible and adapt your plans according to weather conditions. 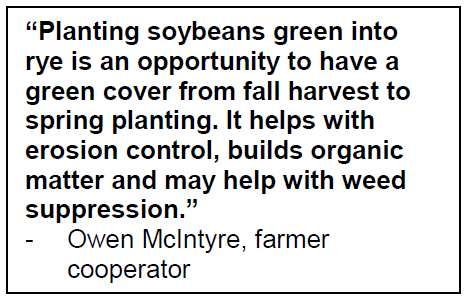 The final year of this OSCIA Tier 2 project will take place in 2020.

This project was supported by OSCIA Tier 1 (2018) and Tier 2 project funding. Donations of cereal rye seed were generously made by Cribit Seeds and Centre de Criblage de Marc Bercier in 2019. Thank you to all the farmer cooperators who participated.