LysteGro has a good fit ahead of a corn crop that needs many of the nutrients that the product provides and can be applied just ahead of planting or as a side-dress application. This reduces environmental risk (volatilization, leaching, runoff) associated with nutrient loss from a nutrient-rich material with high pH and NH4-N and gets more value out of the product for the producer.

This project evaluated the nutrient benefit of 2 rates of LysteGro fertilizer injected pre-plant in corn compared to commercial fertilizer in a field scale replicated trial.

In the final year, the project was expanded to include a food waste-based anaerobic digestate (BioEn) and finisher hog manure.

Field length strips included 2-3 replications of the following treatments as shown in Table 1. Application rates were determined using LysteGro nutrient analysis to meet a 160 bu/ac corn yield goal. The estimated nutrient availability for the organic amendments at the rate targets are shown in Table 2.

Table 3 compares the nutrients applied from the organic amendments used in the study in 2017 and compares both the macro and micro nutrients available from the materials applied to the treatments at each site. The analysis also includes pH, organic matter and salts. All the materials are liquids and were injected ahead of planting or as an in-crop side-dress application. The phosphorus shown indicates the total amount added that will contribute to crop growth, however, the Lystegro material has a high aluminum content which would be expected to limit the availability in the year of application.

Table 2. Approximate Nutrient Availability of Organic Amendments (based on 2017 analysis) 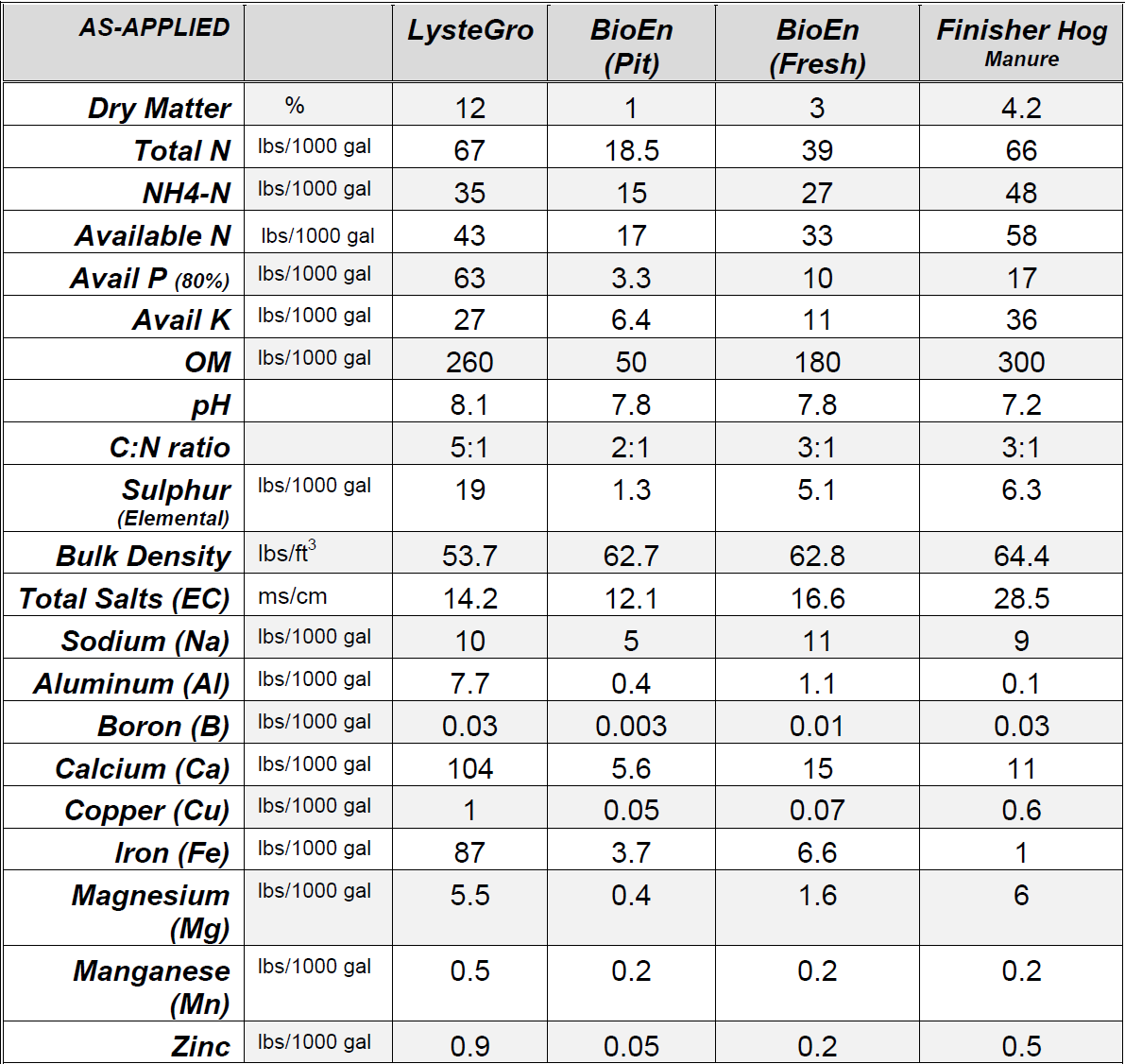 The study was carried out at 5 locations in 2015; 4 locations in 2016 with the layout shown in Table 1. In 2017, 4 sites were included in the study with all sites including Lystegro in the treatments and two sites including hog finisher manure. One site compared two rates of Lystegro with hog manure in an in-crop side-dress application. The individual site information for each year is shown in table 4 (2015) Table 5 (2016) and Table 6 (2017). 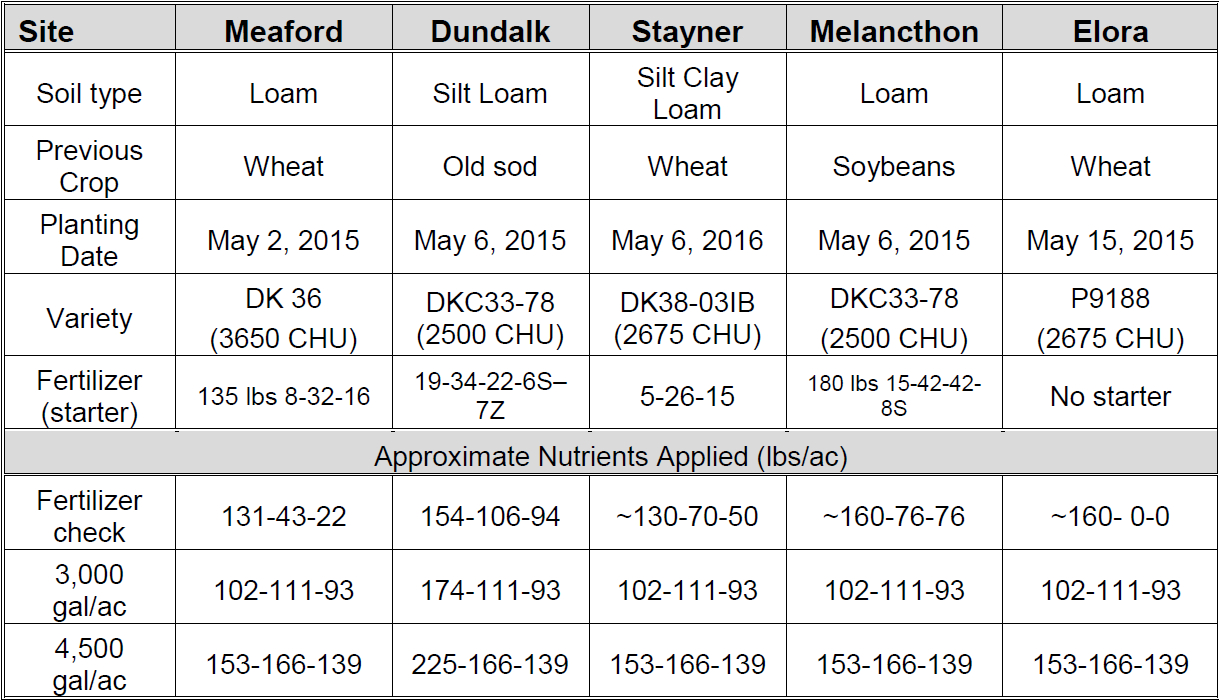 Table 7 shows the plot yields for the various treatments. A frost in late August affected the New Lowell site and resulted in significant yield reductions at that site. As a result, the data for 2017 was indexed to give a better indication of treatment response. The New Lowell site also had the Lystegro and Hog manure side-dressed in mid-June. This site did not have a commercial fertilizer check.

These results are also shown in Figure 1 where the black line in the Average of all the treatments indicates the advantage of all organic amendments compared to commercial fertilizer.

The study was carried out over 3 growing seasons and in 2017 other organic amendments were also included in several sites. Several sites were also included that had cover crops planted after wheat harvest and one site had previous manure. Two of the sites also had the organic amendment applied as a side-dress treatment into a standing crop early-mid June. Several observations from the project results: 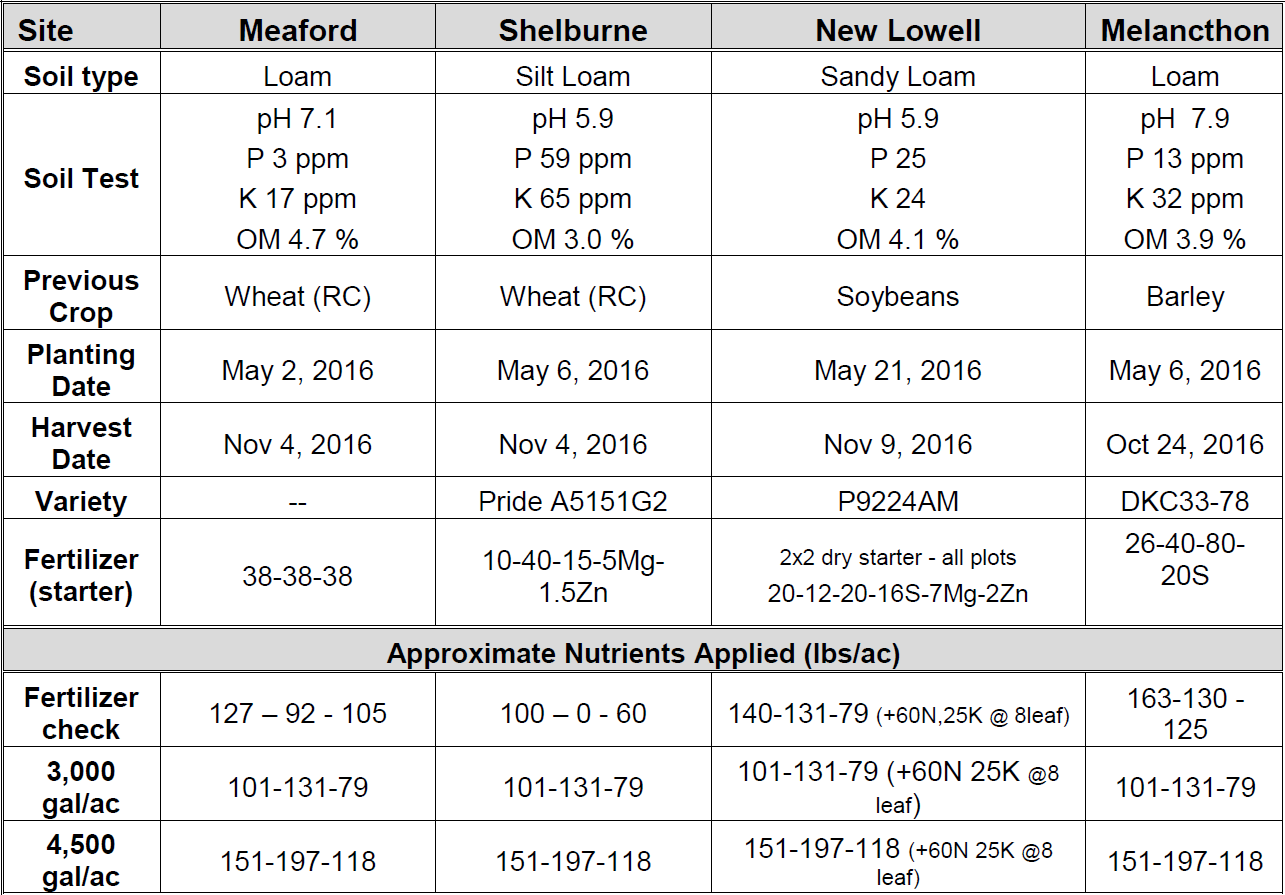 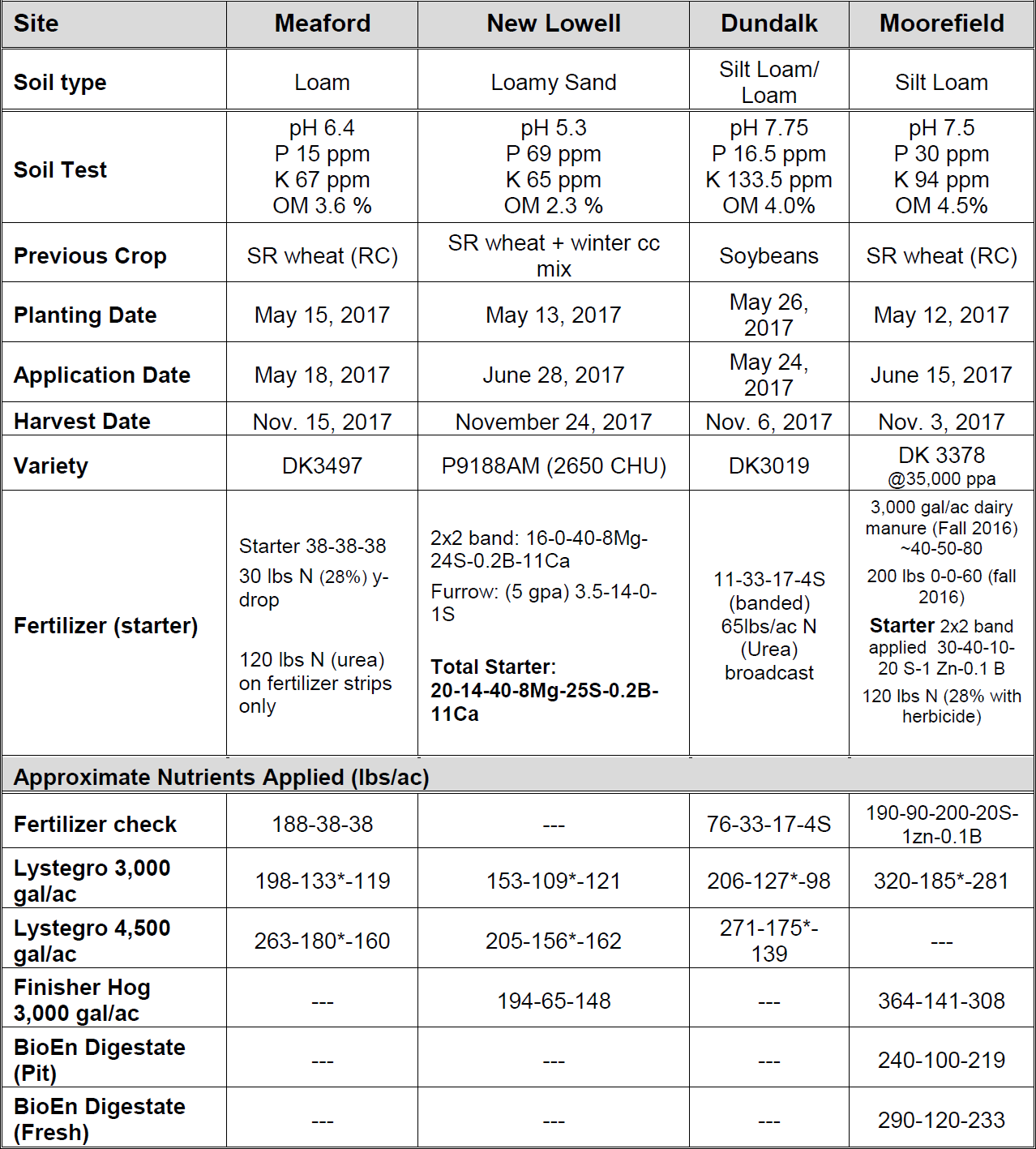 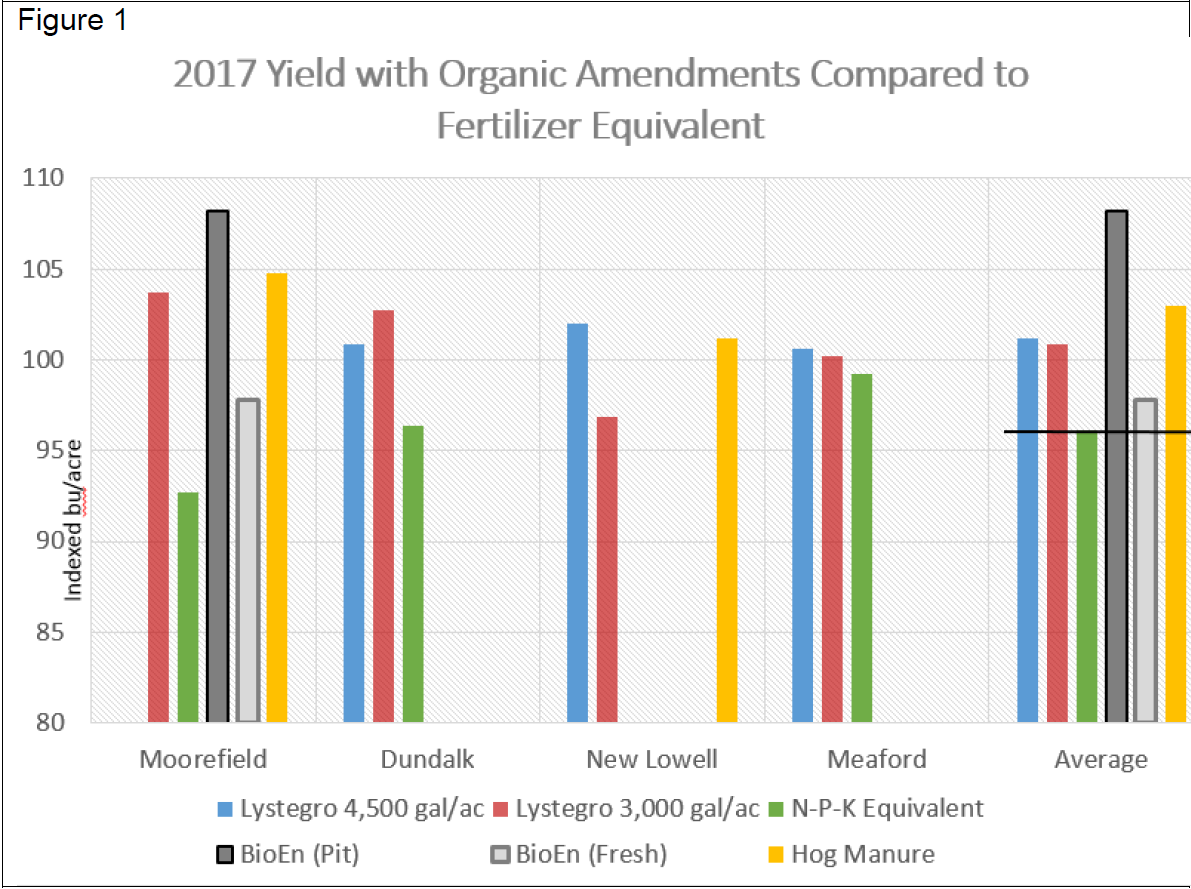 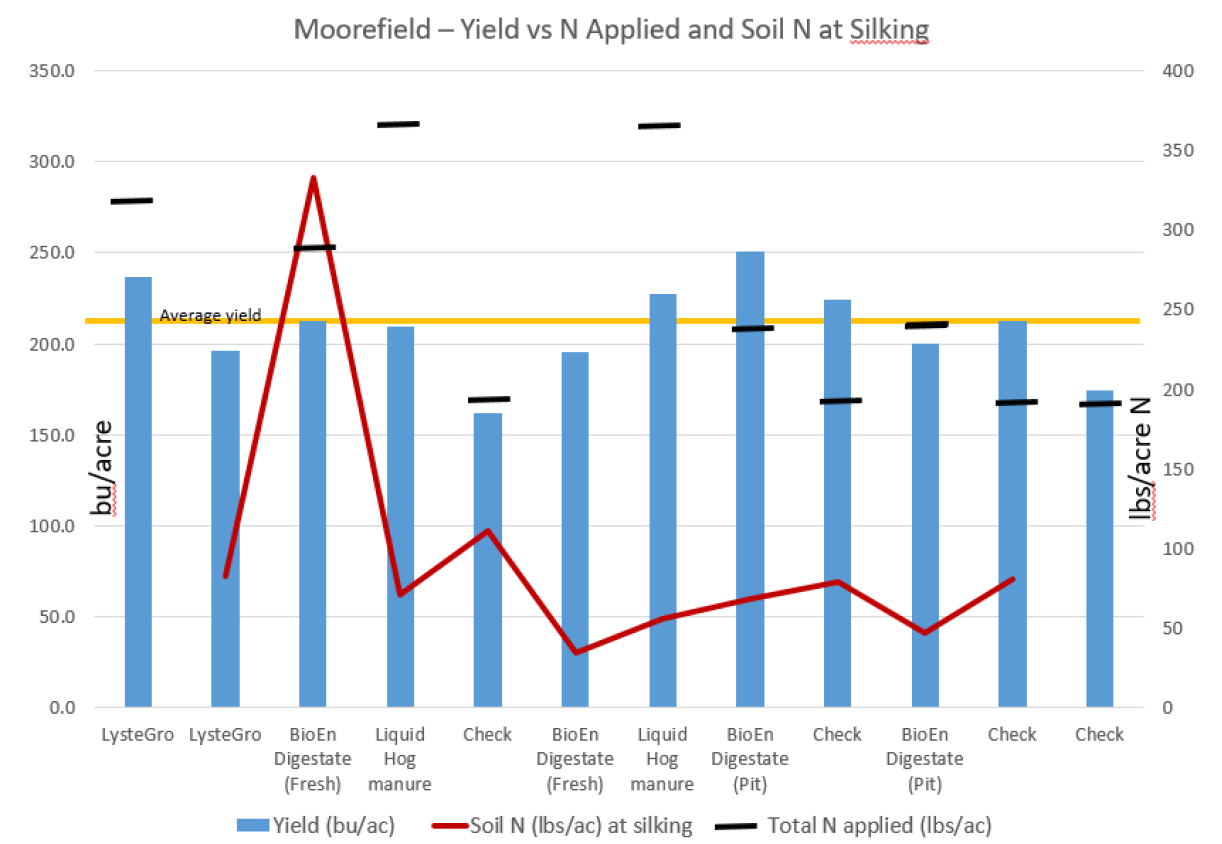 Figure 2a, the Moorefield site includes application at side-dress of Lystegro, finisher hog manure and anaerobic digestate from BioEn, all at 3,000 gallons/acre. The BioEn from the pit had been in storage for a period of months and had lost some of the nitrogen content compared to the material that was fresh from the plant. The nitrogen status in this field is high and there does not appear to be a direct response between the nitrogen that was available for the crop to yield as shown by the treatments with near average yields that had less nitrogen applied. The soil nitrogen status as sampling also indicated that over 50 lbs was adequate for the crop. Stalk nitrate results were highest where the soil nitogen was highest and plant tissue tests indicated adequate nutrients available for growth. 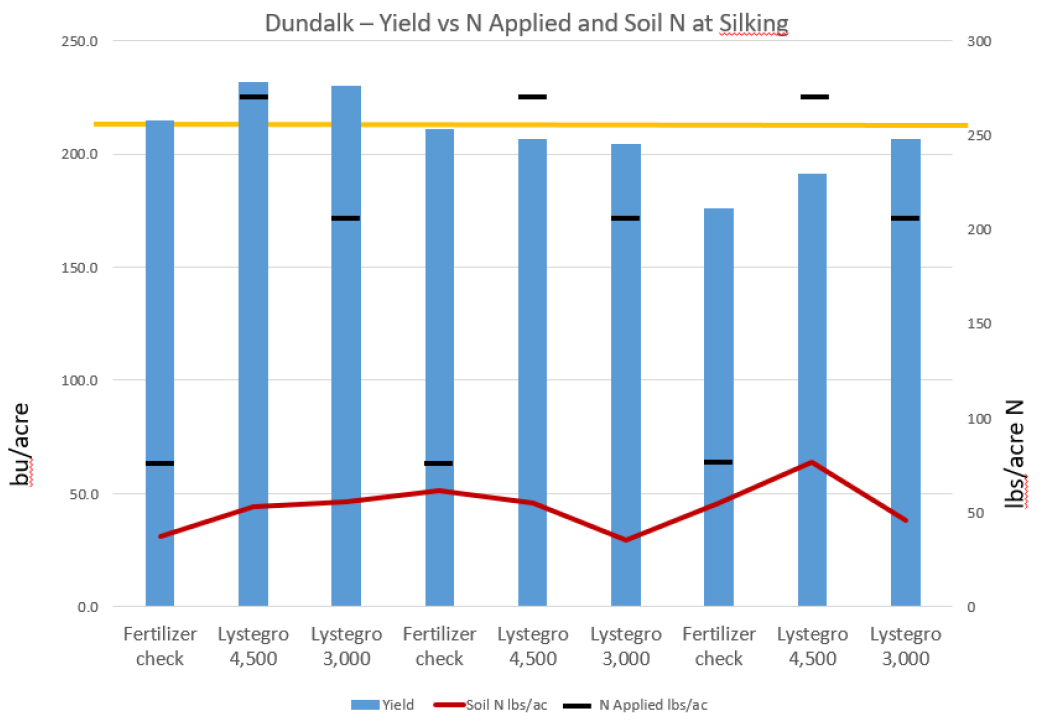 The Dundalk site results show a positive response to the organic amendments and would suggest that nitrogen provided at the 3,000 gallon rate give adequate response. The soil nitrogen at pollination indicate that between 50 and 75 lbs/ac is adequate. Soil nitrates were highest (over 1,500 ppm) where the 4,500 gallon rate of Lystegro was applied. Tissue tests at pollination were all within the ideal range for crop growth. Medium phosphorus soil tests and high aluminum in the Lystegro product always leads to questions about phosphorus availability for the crop, however the tissue tests would indicate that phosphorus uptake is not limited by the application of Lystegro. 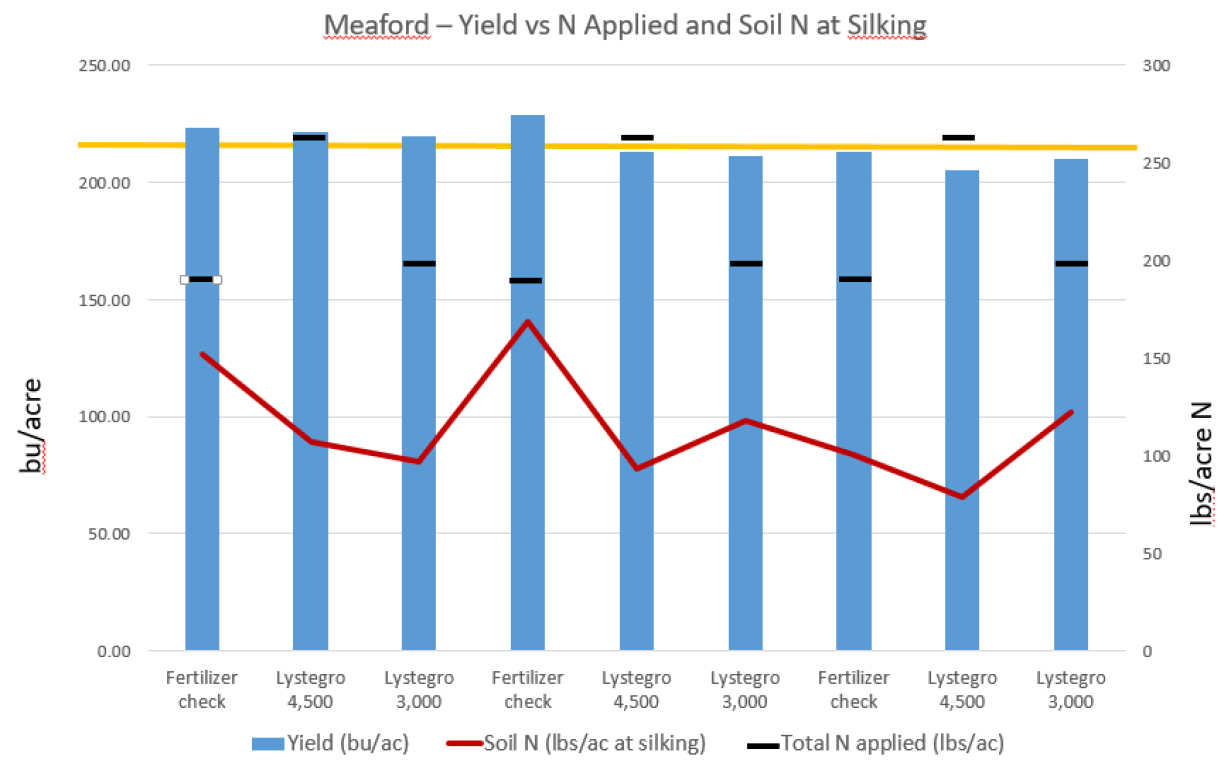 The Meaford site shows a yield response to the Lystegro. The 3,000 gal/ac application rate appears adequate for best yield results. At this site, the additional nitrogen applied from the higher rate did not appear to increase yield. Stalk nitrate samples from all the treatments were high at this site, but well over 2,000 ppm for the 4,500 gal/ac application rate. The soil nitrogen results in this field are higher than expected, even for the fertilizer check plots and the plant tissue results were also within the ideal range for growth. A stalk nitrate test of over 2,000 ppm is an indication that more nitrogen was applied than required for the crop. In this site a lower rate of nitrogen might have resulted in more economic yield. 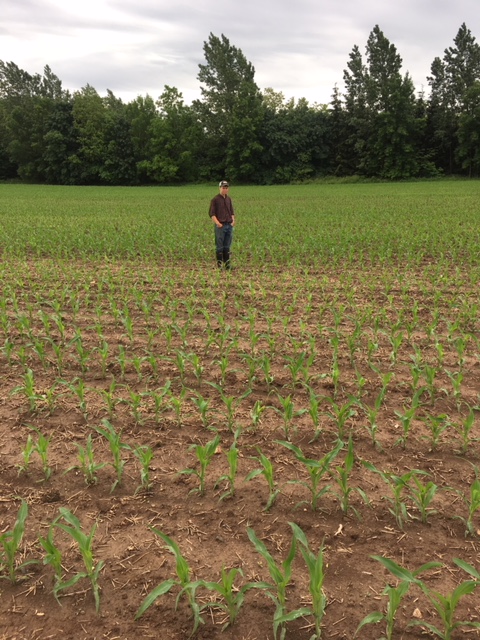 Early season growth where there is a visible difference in the area where Lystegro was applied vs fertilizer treatment. 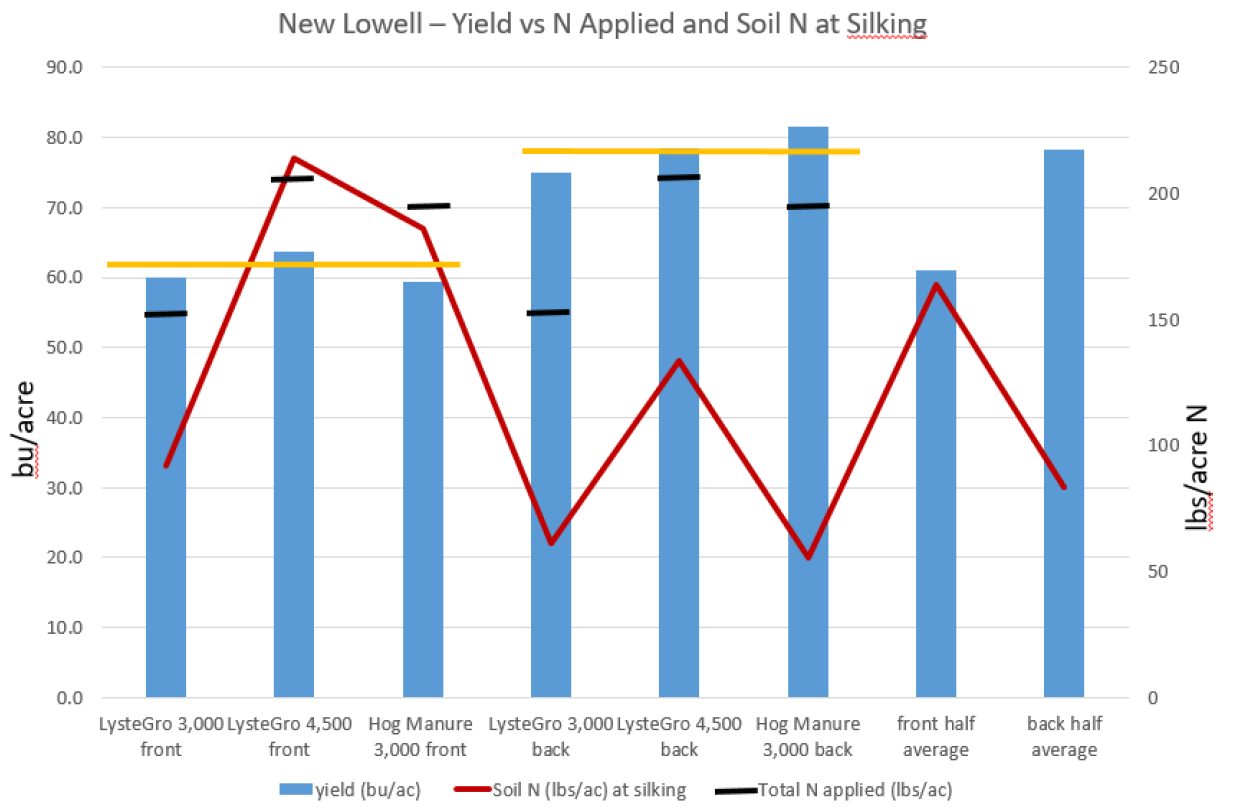 The New Lowell site is situated on a sandy soil with low pH of 5.4 and ranging from 4.9 to 5.9. Application difficulties resulted in the field layout being changed to treatment divided by front and back half of the field. Early August frost impacted growth and yield in addition to pH. The results, including soil nutrient status (P and K) and yield demonstrated almost identical treatment response but large difference in yield from the back vs front part of the field. Soil nitrogen was higer in the front part of the field, however stalk nitrogen levels at the end of the season were low. Plant tissue samples indicated ideal nutrient status for all the nutrients, even with high aluminum combined with low pH. The soil test results for 2017 and 2016 on sandy soils with low pH (two different sites) would indicate that biosolid-type materials, result in higher aluminum saturation that could lead to plant toxicity issues. 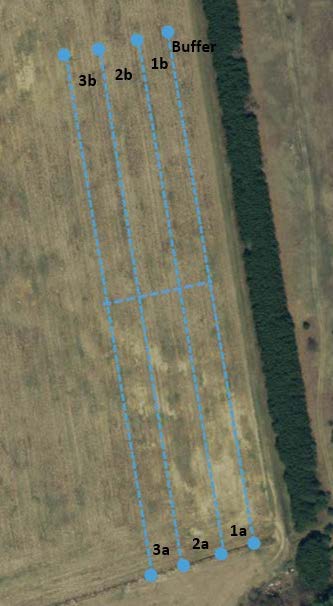 New Lowell site showing difference between front and back part of the field.

Compiled data shows that in 2017 there was a yield response to the addition of organic amendments. Similar to 2015, 2017 was a wet growing season with significant June and July rainfall. This resulted in nutrient losses, specifically nitrogen in the form of denitrification of commercial nitrogen but gave an advantage to the organic nitrogen (slow release) component organic amendments with higher organic nitrogen composition, especially the Lystegro material which led to an average 12 bu/ac yield increase yield increase (3 to 23 bu/ac increase at 4 sites). In 2015 the yield results were similar with an average 16 bu/ac increase ranging from 8-32 bu/ac. 2016 was an opposite year with a very dry growing season. With less than 40 to 80% of normal rainfall for May, June and July for the majority of the region, the focus is more on nutrient utilization than nutrient loss. Dry soil conditions starting at planting probably helped root systems follow the moisture. Yields for treatments comparing the processed biosolids to commercial fertilizer varied within and between treatments based largely on soil moisture holding capacity. In three of the sites there was a 2 to 7 bu/ac increase and at one site an 8 bu/ac decrease where Lystegro was applied. The overall yields were higher than expected considering the 2016 season’s low rainfall. Yield details from 2016 and 2015 are shown below in Table 9 and 10 respectively

The 3,000 gal/acre rate for the nutrient composition of the materials applied in this project matches the crop needs and reduces the risk of late season nitrogen loss. Ideally not all the nitrogen needs for a corn crop will be applied with manure or an organic amendment. However in 2017 project results, it was evident that too much nutrient (especially nitrogen) does not result in increased economic yields. It is important to give credit to all nutrient applied, including fall applied manure. The Lystegro, compared to the anaerobic digestate from BioEn and the hog manure, had a higher organic nitrogen component. In cool conditions in spring this could lead to slower mineralization and can limit crop yield, however in a wet year the slow release will continue to provide nitrogen where commercial nitrogen may have leached or denitrified. A rate to meet total nitogen needs also adds too much phosphorus and will result in higher environmental risk. Lystegro provides about 65 lbs/1000 gal of available P2O5 with half of it assumed available in the year of application.

With an N-P-K and Sulphur equivalent value of over $75/1000 gallons for available nutrients, and with the logistics of transport and application coordinated at a reasonable cost (distance related), this processed biosolids material and/or anaerobic digestate is a good option for farms looking for organic amendments, but don’t have access to livestock manure.

Data collected included soil nitrogen, plant tissue and soil nutrient sampling at silking/pollination, stalk nitrogen and grain protein. The results give an indication of nutrient status of the plant and an insight to potential losses. The results did not lead to additional conclusions at this point but will be further analyzed. This data will be included in the detailed report for this project.