There is concern that the current OMAFRA recommendations do not adequately provide for modern crop yields. Since 1981 corn yields have increased by 80%, soybeans by 35%, and winter wheat by 65%. The OMAFRA recommendations are based on the sufficiency approach which aims to supply the needs of the current crop by taking into consideration the soil test and the immediate economic return to applied P and K. This approach does not aim to build the soil test to any given value. It is also called the “feed the crop” approach. Another strategy to fertilizer recommendations is to “feed the soil”. This method is called the “build and maintain” approach. Building phosphorous and potassium levels in soil represents a significant expense to growers, and can pose economic (ie. land rental) and environmental (phosphorous runoff) risks if soil test values are built excessively high. The sufficiency approach also poses risks because it may not supply adequate nutrients in a year with high yield potential. It also does not allow for a grower to mitigate environmental risks by managing application timing throughout the cropping rotation. For instance applying all the nutrients for a crop rotation in the summer after winter wheat harvest mitigates losses due to spring or fall run offs. This research is being conducted to investigate how starter fertilizer selection (product, rate) and the soil fertility management strategy (sufficiency or build and maintain) influences the economics and productivity of corn, soybeans and wheat over the long term.

The objectives of this project are to i) identify which fertilizer rates and application methods maximize net returns during the year of application and to ii) identify over the longer term whether meeting fertilizer recommendations for a given fertilizer test will provide yield and net return equivalent to a build and maintain approach, particularly in a high yielding environment.

Two field scale sites were established in 2012 near Elora and Bornholm. A third site was secured in the fall of the 2013 season near Lucan. One additional site was established by the U of G at the Ridgetown campus. Each trial location is studying a three crop rotation that includes winter wheat, soybeans and corn. Table 1, below, outlines the current project timeline, including the years in which the OMAFRA trial locations were established and what crop yield data was collected. 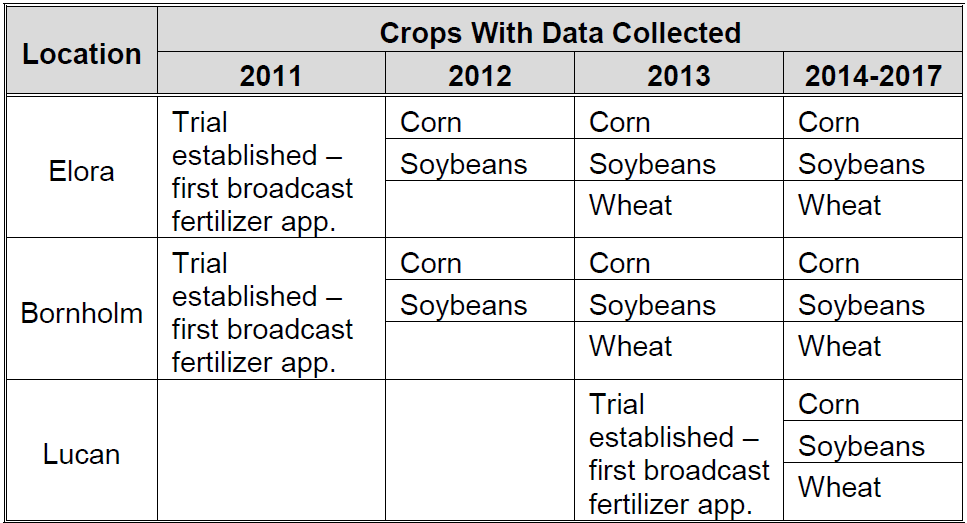 The broadcast fertilizer treatments to build the soil included the following:

The starter fertilizer treatments applied each year included the following:

These treatments were randomized and replicated three times at each trial location. Each treatment was 10’ wide by 60’ long. Trials were planted with a Kearney 15" vacuum planter with a precision seed monitor. See picture #1. All harvesting was
completed utilizing a customized combine equipped with a batch weigh system and moisture tester. 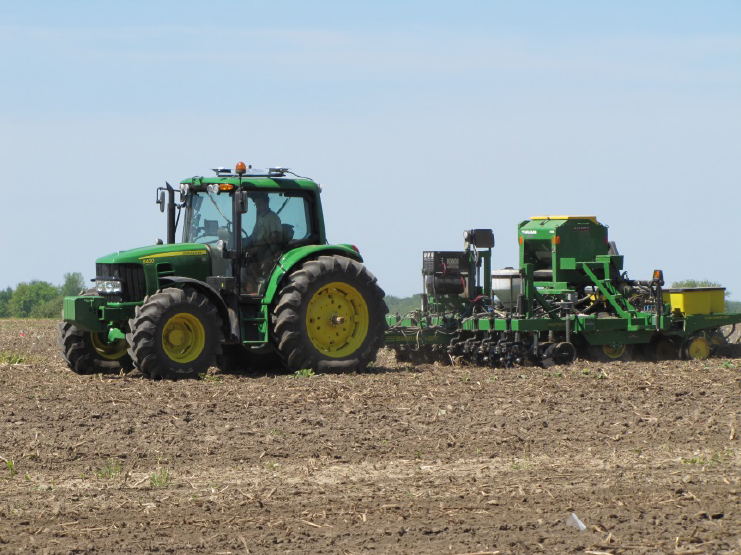 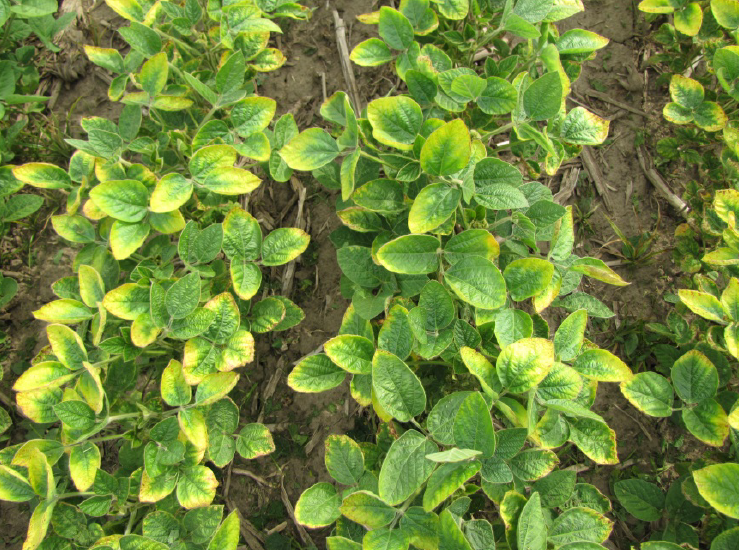 We would also like to thank the Grain Farmers of Ontario, who provided financial support for this project. The access to tractors for these field projects from John Deere is greatly appreciated. This project was conducted in Partnership with Ben Rosser (OMARFA), Peter Johnson, and Dr. David Hooker (U of G).