To evaluate the optimum termination timing of red clover established under winter wheat the year prior to planting field corn for impact on corn yield and the Maximum Economical Rate of Nitrogen (MERN).

Table 1: 2017 Corn yield at the 0 and 150 lbs/ac actual nitrogen rate and the calculated MERN for each treatment, respectively. 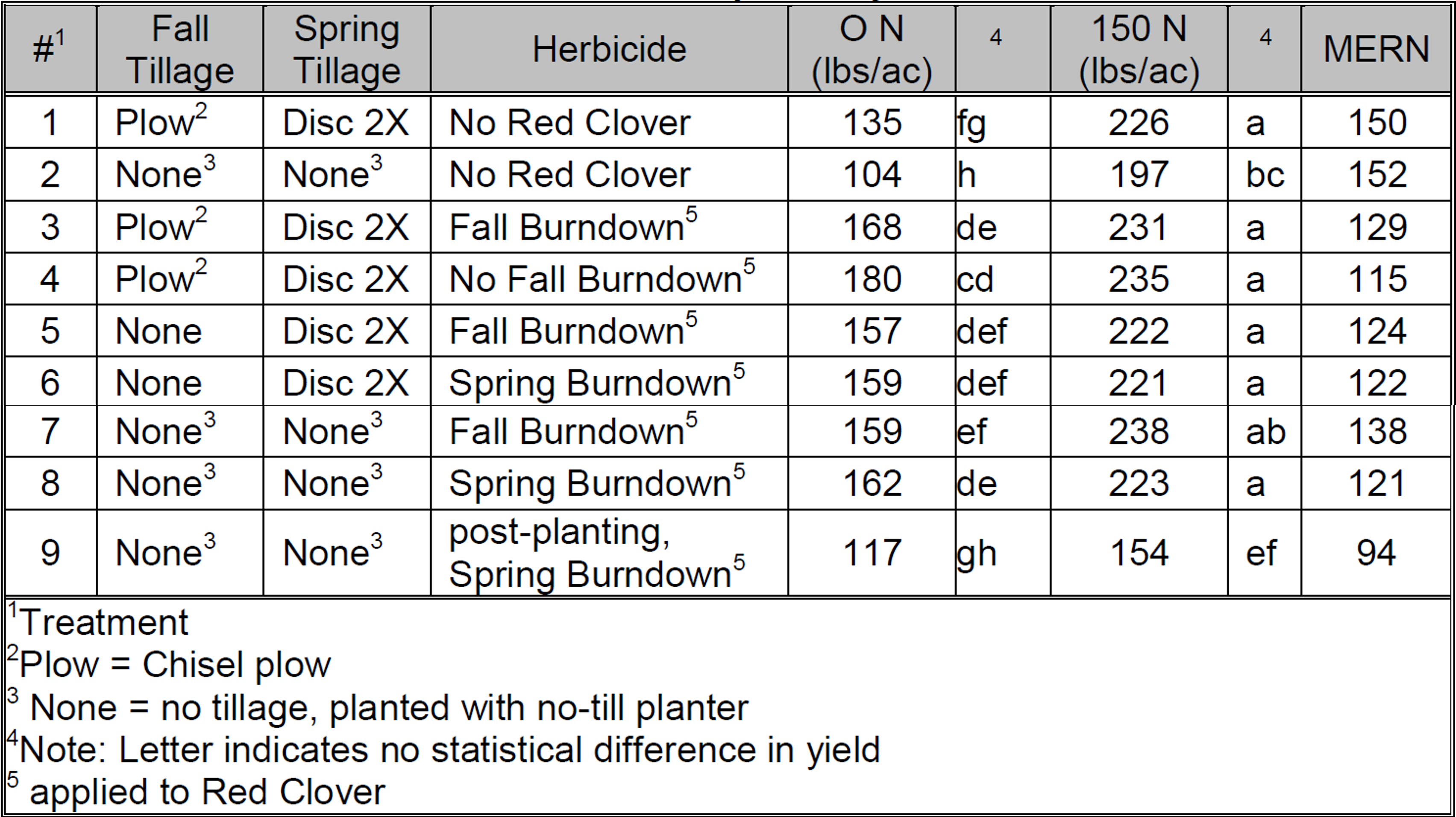 Treatments 1 and 2 compared the corn yield of a conventional tillage to a no-till system without the benefit of red clover. This gave a good comparison of the benefits from red clover to the other treatments. First, corn yields with similar with and without red clover at the high nitrogen rate (150 lbs/ac).

It is also interesting that with red clover, the conventional tillage yield compared with the no-till system is similar (not statistically different) with the 150 N/ac rates.

Treatments 3 and 4 compare the fall vs spring burndown of red clover under conventional tillage. In 2017, the corn yields were similar, however the MERN was higher for fall burndown. This was not the case in 2016, where the fall burndown MERN was about 2/3 (less nitrogen required) than the spring burndown (data not shown in this report). Figure 1 shows the amount and state of red clover on 15 May 2017 prior to spring tillage and planting corn on 24 May 2017. Figure 2 shows the plot after it was disked 2 times and planted on 5 June 2017.

Treatments 5 and 6 compares the red clover termination in the fall vs spring burndown with spring tillage only (no fall tillage). Again yields and the MERNs are similar whether the red control was terminated in the fall or the spring. Figure 3 shows on 15 May 2017, the stage of the red clover residue from the Fall Burndown applied on 14 Oct. 2016 as compared to the Spring Burndown applied 9 May 2017.

Treatments 7 and 8 compares the red clover termination in the fall vs spring burndown of with a no tillage system. Again yields and the MERNs are similar whether the red control was terminated in the fall or the spring. Figure 4 shows the Spring Burndown, No-till corn into Red Clover on 5 June 2017. Figure 5 show the emergence of the corn struggling through the in Spring Burndown of the red clover residue on 5 June 2017.

Treatments 9 was to look at the concept of “plant-green” first, then follow with the termination of the red clover. As shown, was a significant yield drop with this approach. Figure 6 shows the huge volume of red clover biomass that was the “Green-Plant”, No-till corn on 5 June 2017.

Overall, the MERN shows that red clover gave the benefit of about 30 lbs/ac nitrogen compared to not having red clover the year before to corn in 2017. No-till corn into terminated red clover yielded comparable to conventional tillage.

This was the second year of this trial. Red clover has being inter-seeded into winter wheat in the spring of 2017 for a third year to be planted into corn of this trial which will be harvested in the fall of 2018.

This project was funded by the Ottawa Valley Seed Growers Association and conducted at the Winchester Research Station. This project was conducted with assistance from Holly Byker, Ian Deschiffart, Harry Hitsman, Ben Melenhorst and Anna Stubbings.