This project is designed to investigate and determine farming practices that allow Relay Cropping Wheat and Soybeans to have a consistent net economic return higher than either crop grown as a monocrop. The project is a Tier 2 Ontario Soil and Crop Improvement Association project of Quinte Region Soil and Crop Improvement Association with involvement of the Heartland and Thames Valley Regional associations as well.

Three replicate field scale trials were conducted at 3 sites in 2018, 3 sites in 2019, and 2 sites in 2020. There were 3 main treatments in this trial which include

All wheat was planted using a 1560 John Deere no-till drill. To plant the twin row wheat several rows of the drill were blocked off as shown in Table 1. Starter fertilizer was still applied to the rows with seed tubes blocked.

Soybeans were inter-seeded into the wheat using a 3pt hitch Tye Series 4 no-till drill with row units removed, to drill only into the interrow spaces. The soybeans were planted in 30” rows between the twin rows of wheat (Image 1). To harvest the twin row wheat with soybeans interseeded pieces of 6” drainage tile were cut to slide over the cutter bar on the header to prevent the soybeans from getting clipped (Image 2). This header configuration was not perfect, but very little wheat was missed at most locations.

All treatments received 120 to135 lbs of nitrogen and 12 to 15 lbs of sulphur per acre in the spring. All sites were sprayed with herbicide before the soybeans emerged, except for the Bornholm location in 2020. At this location the beans had started to emerge before herbicide application was accomplished, thus no herbicide was applied. All sites received a T3 fungicide across all treatments, including onto the soybeans. 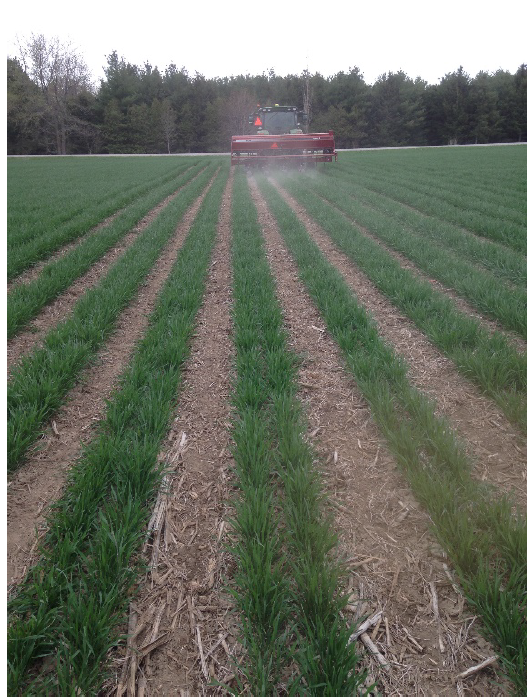 The planting and harvest dates for the winter wheat and soybeans are shown Table 2. In 2018 the soybeans were planted on May 11th, while in 2019 planting was delayed until June due to a wet spring and wet field conditions. A cold start to May in 2020 delayed bean planting until May 18. While the initial target was to plant all the soybeans into the wheat early, these different planting dates really allowed assessment of this strategy under different soybean management strategies. The best results were actually obtained with the later soybean planting dates in 2019, which also coincided with later wheat planting dates in the fall of 2018. This finding is one of the key outcomes for growers considering this practice: later planted winter wheat with delayed soybean planting in the spring appear to be management strategies that will improve the chances of success.

Yield results are shown in Table 3. On average an 11% (9.6 bu/acre) reduction in wheat yield resulted from twin row wheat compared to a full wheat stand (7.5” inch rows). An additional 8% (6.5 bu/acre) reduction in yield was experienced with the inter-seeded soybean treatment. A large portion of this additional yield loss occurred during the harvest process. A small number of wheat heads were pushed under the knife by the pieces of tile over the knife to protect the soybean plants (Image 3). This loss could be corrected by use of a row crop header, but one was not available for this project.

Winter wheat variety selection could also have an impact on harvest losses. Strong strawed, upright varieties would maintain upright head position making it less likely to have heads pushed under the cutterbar. Some wheat yield loss may also be due to the soybean planting process and tramping of wheat, or the drill planting the soybeans cutting off wheat roots with the double disc openers. Tramping of wheat was minimized and appeared insignificant, but root pruning of the wheat crop was inevitable in order to plant the soybean crop. Overall, the yield loss of the wheat with relay soybeans compared to the twin row wheat without soybeans is likely due to both of these factors.
The summer of 2018 was very dry in many areas, which had a major impact on the relay soybeans. At the Lucan site in 2018 the soybeans suffered severely from a lack of moisture as the early planted, high yield wheat crop used virtually all of the soil moisture. By wheat harvest nearly 50% of the soybean plants had died from lack of moisture. The remaining soybean plants had aborted most of the flowers, and by the time moisture did come after wheat harvest the surviving soybeans did not reflower. As the remaining soybean plants had no pods the soybeans were not harvested at this site, and the yield is assumed to be zero. The Woodstock location also had very few pods and the pods that did form contained only tiny seeds. The soybeans were not mechanically harvested at the Woodstock location but the yield was estimated to be 6 to 7 bu/acre by hand harvest of plants and pod counts.

The spring of 2019 was extremely wet which resulted in poor and variable wheat stands at both the Bornholm and Belmont locations. At the Bornholm location there were areas within the plots where the wheat was completely winter killed. Overall soybean seed quality was good with moisture’s ranging from 15% to 17%. However, at the Bornholm site in 2019 the soybeans were still green, and at harvest had a bad odour. The soybeans planted at Bornholm were the same maturity as the field soybeans at that site, and the field soybeans were fully matured with no odour or colour issue. This difference in seed quality was surprising and showed the impact of the wheat competition on the relay soybeans, and presented an argument against long season soybeans in the relay crop system to try to maintain soybean flowering after wheat harvest is complete. At both Belmont and Lucan in 2019, longer season soybeans were planted to try to maintain flowering beyond the timing of wheat harvest, based on the 2018 results. At both of these sites soybean seed quality at harvest was fine, although seed moisture was high, and soybean maturity was extremely late.

In 2020 the Lucan location again suffered from drought conditions during June and July, causing death of about 1/3 of the relay soybean plants, with the remaining relay soybeans aborting flowers and resulting in almost no pods. Extreme winds from a severe storm (tornado confirmed nearby) just prior to wheat harvest caused lodging in the twin row wheat with relay soybeans, which made harvesting the two crops separately impossible. It should be noted that only the twin row wheat with relay beans lodged. The twin row wheat without soybeans, and 7.5” row wheat had zero lodging from the tornado force winds. As the surviving soybeans had essentially no pods, the soybeans were abandoned and all wheat harvested by cutting wheat and soybeans at ground level during wheat harvest. The soybean crop at Bornholm looked promising early on, but did not develop post wheat harvest and yield results were very poor.

The total revenue from each treatment is shown in Table 4. At the time this report was written wheat was valued at $7/bushel while soybeans were at $14.70/bushel and these are the values used to calculate total revenue. This does not account for any additional cost or savings a treatment may provide. On average the relay bean treatment indicates an extra $36.22 of revenue per acre, but this does not account for the cost of 2 additional passes over the field to plant and harvest the soybeans, the cost of soybean seed, or the cost of weed control in the soybeans post wheat harvest. Returns were larger at the sites with lower wheat yields (Bornholm 2018, 2019, and Belmont 2019) where returns ranged from $130/acre to $200/acre. These economic results also ignore the value of straw, which is extremely difficult to harvest from the relay soybean plots (potential straw value $100-$200/acre), or the value of cover crops in a “wheat only” system, plus the opportunity to spread manure, all of which are not possible with relay soybeans. 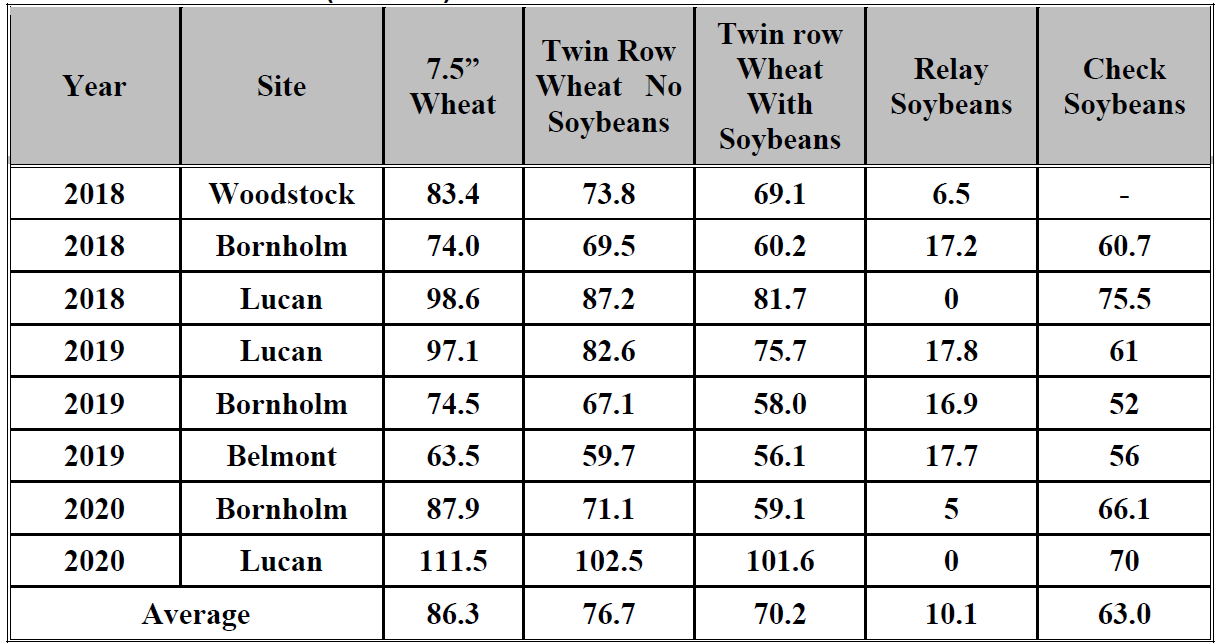 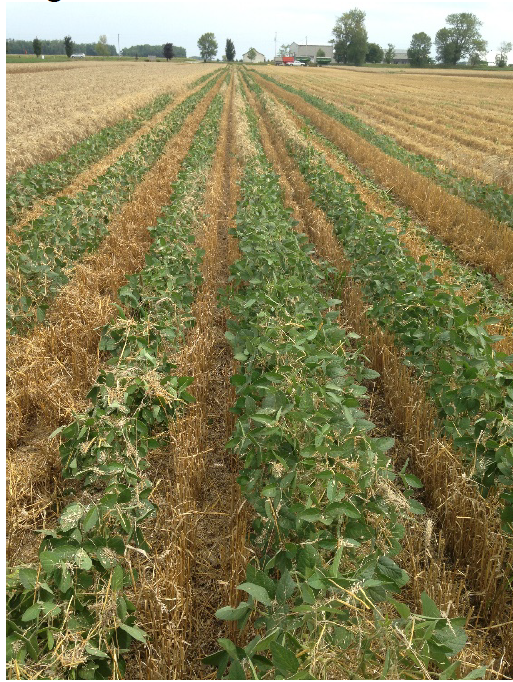 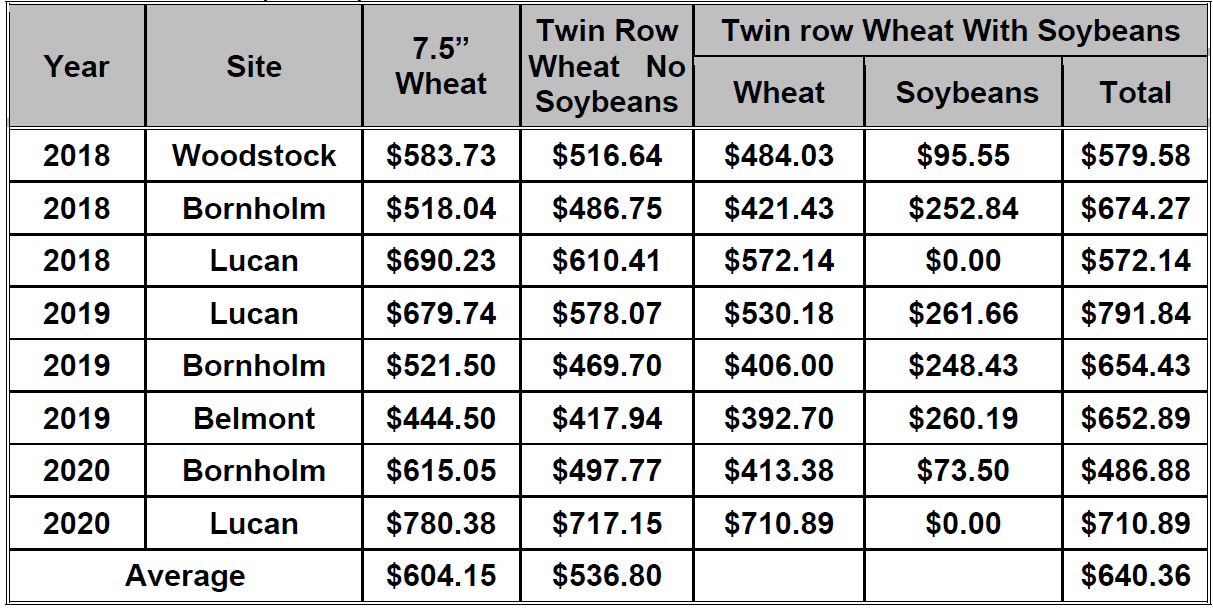 A treatment including an increased seeding rate of winter wheat was also included at several locations. The high seeding rate was typically about 50% above the normal seeding rate. Twin row wheat seeding rates are 50% of solid seeded wheat (the number of seeds per foot of row was not adjusted). These results are shown in Table 5. High seeding rate rarely had an impact on final wheat or soybean yield in any of the treatments.

It is important to note that the twin row wheat consistently had increased weed pressure than the 7.5” wheat (Image 4). The value of crop canopy for weed control/suppression cannot be overlooked when evaluating cropping systems. As well, planting relay soybeans into a winter wheat crop drastically limits the herbicide options that can be used in the wheat. While all treatments had a herbicide applied prior to wheat planting except Bornholm 2020, the herbicide options that are registered both in winter wheat and pre-plant in soybeans is extremely limited. In some instances there may be problem weeds that are not controlled by these herbicides. At the Belmont location in 2019, grass weeds were particularly problematic in the twin row and relay soybean treatments. In the solid stand of wheat, crop competition provided essentially 100% control of grass weeds. Annual grasses are virtually never a problematic weed in winter wheat fields, thus the grass weed pressure at Belmont was notable. In this case, an additional grass herbicide cost would need to be included with the relay soybean economics. 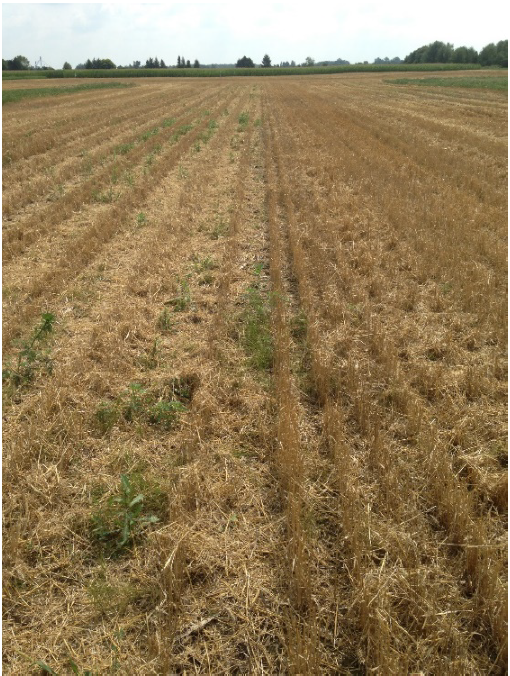 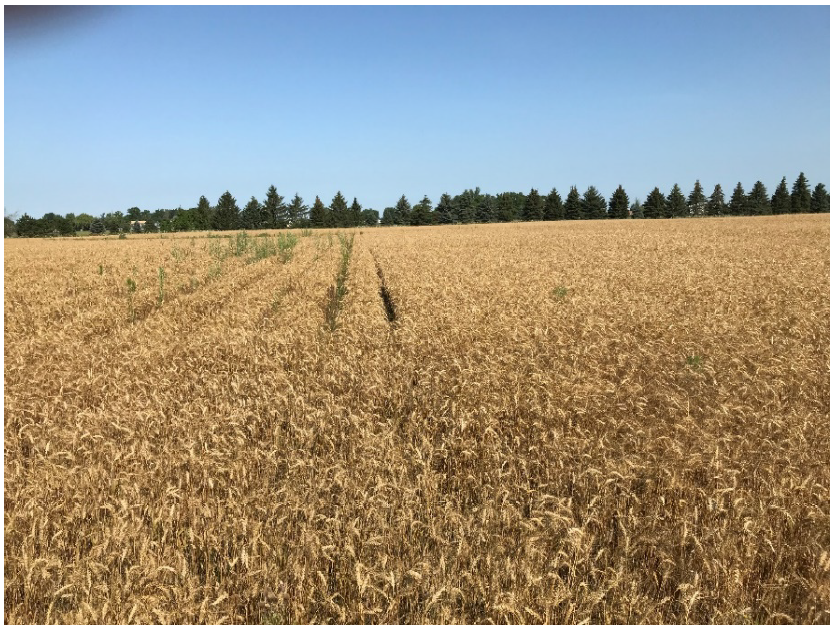 On average, there was a 11% (9.6 bu/acre) reduction in wheat yield going from 7.5” inch rows to twin row wheat. An additional 8% (6.5 bu/acre) reduction in yield was found with the inter-seeded soybean treatment. A large portion of this additional yield loss likely occurred during the harvest process. The relay soybeans yields averaged 10.1 bu/acre with a range from 0 to 18 bu/acre. Economic analysis showed a net increase in gross return of $36.22/ac with the relay soybeans system before any additional costs of establishment, weed control or harvest were included, and without considering the value of the straw. It should also be restated that these economic calculations were done valuing soybeans at $14.70/ bushel and changes in crop value will impact outcomes.

Key findings for growers considering adopting this management strategy are

This trial is now complete.

This project would not be possible without the leadership and funding of the Ontario Soil and Crop Improvement Association, as well as the Quinte Regional Soil and Crop Improvement Association, and the Middlesex SCIA. A big thank-you to co-operators Kevin Rivers, Christine and Andrew Brown, Jeramel Farms and the Perth SCIA (Bornholm location). Thanks to Marcel Meyer for harvesting the Belmont location soybeans, and to Horst Bohner for always looking after soybean harvest at Bornholm. Thanks to Pioneer and Maizex for supplying the soybean seed for these plots. And finally, thanks to Marian Desjardine from MSCIA for her administrative skill, and a HUGE thank-you to Shane McClure, who makes sure all this work actually happens.