Swede midge continues to pose a significant threat to canola production in Ontario. Based on farmers’ experience with the pest and the difficulty of controlling swede midge through insecticide applications alone, it is clear that multiple tactics are required for successful swede midge management. Beneficial insects that parasitize swede midge could be valuable in controlling the pest. Knowledge of the presence and activity of parasitoids will lead to refined integrated pest management strategies. 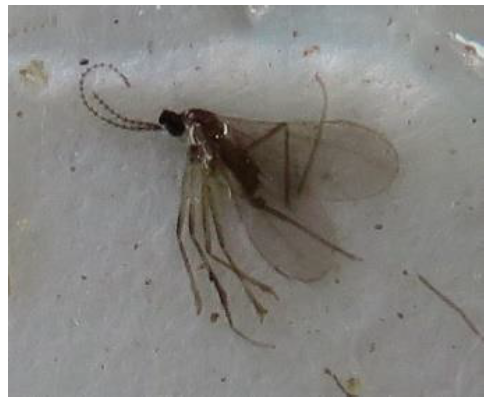 A survey of oilseed rape in Europe in 2008-2011 identified some possible beneficial insects including the parasitic wasp Synopeas myles (Figure 2). Surveys in Ontario, led by the research team of Dr. Rebecca Hallett, University of Guelph, have shown that this insect is present in Ontario as well. The purpose of this study was to identify the presence of S. myles in Ontario canola, and to determine to what degree S. myles is able to parasitize and control swede midge.

Sampling for S. myles across the canola growing regions of Ontario was conducted in 2017 and 2018. In 2017 there were 30 sites where samples were collected once or twice during the flowering stages of canola in June and July. In 2018 samples were collected at 26 sites. Sample locations were within the following counties or districts: Cochrane, Temiskaming, West Nipissing, Renfrew, Peterborough, Durham, Dufferin, Wellington and Bruce. 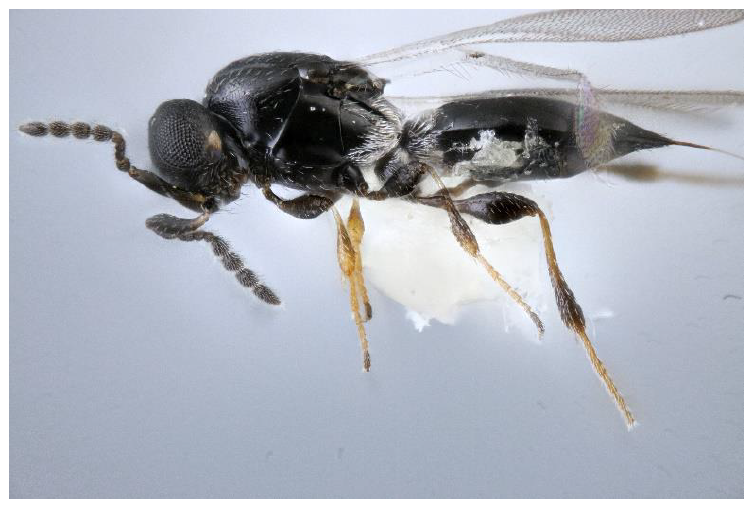 Swede midge larvae are found on fast growing tissue of brassica plants, such as within flower bud clusters. Canola plants were sampled in the flowering stages so that there were multiple growing points on each plant. At each site, 20 plants that showed signs of swede midge damage were cut at the soil surface and individually bagged (Figure 3). Damaged plants are typically easy to find at field edges. Samples were kept cool until they were delivered to the University of Guelph.

Figure 3. Example of a plant identified to have swede midge damage and collected for the survey. Plants that showed damage at multiple growing points were preferred for sampling. Cutting open this bud cluster would reveal the tiny swede midge larvae. 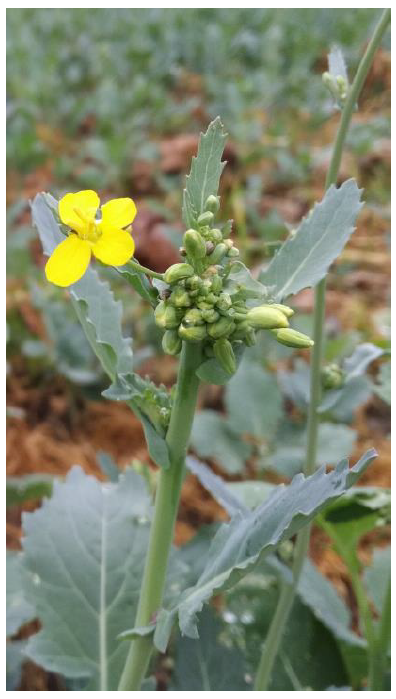 S. myles females lay an egg inside the bodies of developing swede midge larvae, and the larvae continue to develop with a wasp growing inside. Eventually the parasitized swede midge larvae drop to the ground to form a cocoon in the soil as they normally would. However, an S. myles wasp will emerge rather than an adult swede midge.

The growing points were cut from each canola plant and placed in soil in a closed container (Figure 4). The number of adult swede midge and S. myles that emerged from the soil were counted, and percent parasitism was determined. 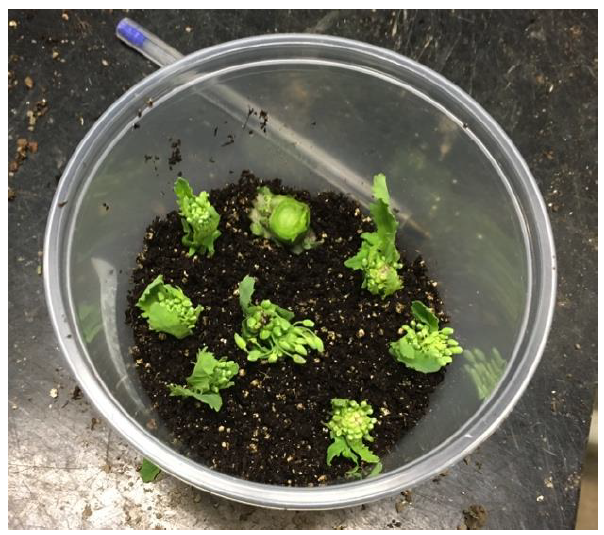 In 2016 through 2018, sites near Shelburne and Meaford were sampled weekly using similar methods to determine how long S. myles is present during the growing season.

Parasitic wasps collected from containers were sent to experts in Copenhagen and Saskatoon for visual and molecular identification.

Although the parasitoid was not found in the samples from every farm field, it was found in at least one field of each county or district sampled. The identification of S. myles in important canola growing regions of Temiskaming and West Nipissing is promising in that the non-native beneficial is being found in more northern regions under fairly limited sampling procedures. It is likely that S. myles is located at more sites than indicated by the results, since sampling was limited in terms of both the number of times a site was sampled and the number of plants collected during the season.

Table 1. Abundance of S. Myles Found In Ontario Canola Fields, and Dates of Earliest and Latest Detection in 2016- 2018.

There appears to be about 11 weeks of the season during which S. myles can be found. Swede midge emerge from the soil at the end of May or beginning of June. The wasp is typically first detected 1 to 2 weeks after swede midge first emerge. Rates of parasitism averaged 5.5% in Ontario, compared to 2.9% in the European survey. The maximum level of parasitism by S. myles observed at an Ontario location was 30%. Relatively high levels of parasitism were observed in 2016, and in the week of July 7th all 4 sample sites had an average of 27.9% parasitism of swede midge. However, in 2017 abundance of S. myles was much lower, and the highest parasitism rate reached only 4.1%. A second species of beneficial wasp, from the Platygastridae family, was identified in some samples. Environmental and individual field differences across years likely affected both the swede midge and beneficial insect populations.

To date, the observed levels of parasitism are much lower than those required to control swede midge sufficiently to prevent yield loss on their own. Researchers have reported that parasitoids that provide rates of parasitism under 30-40% may not have a large impact on target pests. Anecdotally, famers and agronomists in the Shelburne area have noted in recent years that swede midge populations climb rapidly at first then tend to level off. They question whether this is related to the abundance of S. myles found in that area.

Multiple approaches will always be required to control this difficult pest in canola. However, continued research on the environmental factors affecting parasitoid presence and abundance, and the impact of crop management practices on the beneficial, could lead to improved stewardship of these helpful insects and higher rates of parasitism.

Dr. Hallett’s lab will continue surveying for S. myles, and hope to gain a better understanding of the parasitoid’s population within swede midge’s invasive range. A better understanding of this parasitoid may lead to opportunities to promote its activity. Through the establishment of a captive population of S. myles, research will continue on the environmental factors affecting its survival and rates of parasitism. Insecticides that are used for controlling swede midge on farms will be evaluated for their relative activity on S. myles in an effort to reduce negative impacts on this beneficial insect.

This report was co-authored with Dr. Rebecca Hallett and Charles-Étienne Ferland (MSc Candidate) from the University of Guelph, and Meghan Moran, OMAFRA Canola & Edible Bean Specialist.

Many canola growers and agronomists from across the province participated in the survey efforts and their support is greatly appreciated.

Funding provided by the OMAFRA/UG Partnership.