In autumn of 2018 plant populations were assessed in each field. Plants were counted at 12 random locations within each field using the hula hoop method for those planted on 7.5” rows. For those planted on 15” rows, plants were counted in two neighbouring rows along a 17’6” length. GPS coordinates of the 12 locations were recorded and stakes were left in the ground to mark the locations so that winter survival could be assessed in the spring. The initial populations were collected in mid-October.

Spring population counts were conducted in April or May. Plant counts were not collected if it was impossible to find the exact location where the autumn assessment was made because the stakes had heaved out of the ground or washed away. This was more common on fields with heavier soils. To assess the health of the canola plants in spring, some plants were cut at the soil surface to check for damaged vascular tissue. 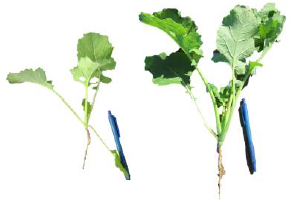 Figure 1. Canola plants should be at 4-leaf stage (left) to 6-leaf stage (right) prior to a hard frost in fall. Plants are shown in comparison to the size of a pen.

Figure 2. Plants cut at the soil surface in spring to assess plant health. The two plants on the left have damaged vascular tissue (hollow stems) and have very low yield potential. The plant on the right has a small amount of damage but is healthy, with good yield potential. Levels of damage in between those shown above will have to be carefully evaluated and it may be appropriate to reduce the amount of spring nitrogen fertilizer to meet yield potential. 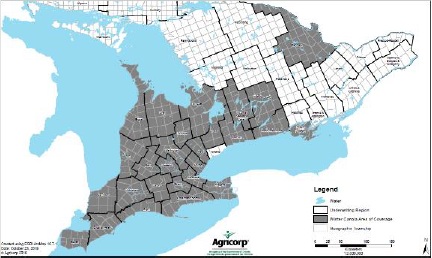 Winter survival of winter canola is dependent on many factors including plant growth stage prior to a hard frost, drainage and soil type. Canola should have at least 4 leaves prior to frost (Figure 1) but should not reach reproductive growth stages (bud formation or bolting). Growth stage prior to winter is influenced by planting date, seed bed preparation and planting equipment choice. The small seeds require a fine seedbed and minimal residue on the soil surface to reduce risk of slug damage. A seed drill can be used for planting but note that emergence will likely be variable, with plants at different growth stages prior to winter. A row unit planter can also be used to plant canola on 15” rows and typically results in higher rates of emergence (lower seeding rates can be used) and more uniform stands. Broadcast seeding or planting on rows wider than 15” is not recommended.

The target population for winter canola should be 5 to 8 plants/ft2 or approximately 250,000 plants/ac. However, canola has a strong ability to branch and fill in at low populations. An even stand of healthy plants at 2 or 3 plants/ft2 in the spring can achieve yields similar to stands of 5 to 8 plants/ft2.

It is undesirable to have seedlings too close together because they compete with each other, resulting in long hypocotyls where plant crowns (growing point) are not set snug to the soil surface. This increases risk of poor survival because growing points are more exposed. For this reason, it can be beneficial to seed winter canola at a lower seeding rate than typically used for spring-planted canola.

Planting dates for Kent and Essex county fields were appropriate for the region, although a high amount of rainfall in September negatively impacted rate of emergence and speed of plant growth in some fields. In fields that were most affected by September rainfall the canola did not reach the 4- to 6-leaf growth stage before winter, or only had acceptable growth and survival over the tile runs. Broadcast seeding at a very late date (Sept 30) also resulted in plants that were too small for winter survival.

Winter survival may have been improved in Grey and North Wellington counties if planting had been earlier in 2018. Emergence and fall growth in these fields was variable, so smaller plants died while larger plants survived. Unsatisfactory performance of a grain drill on a hilly field and extremely prolonged wet conditions in the spring of 2019 contributed to stand loss issues on these fields. The North Wellington field was extremely delayed and patchy but produced a very strong yield.

The reduction in plant stands from fall to spring was generally because plants were at a wide range of growth stages in the fall. The plants that entered winter at the 2- to 3-leaf growth stage died and plants at the appropriate 4- to 6-leaf growth stage survived. More uniform seeding depth and finer seedbeds would have improved uniformity of emergence timing in some fields. Planting earlier also would have given more time for all plants to reach the appropriate size.

Winter canola survives on its root, so roots approaching the length and diameter of a pencil are desirable. Winter wheat survives on the seed, and typically has better winter survival than canola. It is noteworthy that the spring of 2019 was extremely wet in many parts of Ontario, and poor survival of winter wheat was common in the regions this study took place.

Heavier soils generally had greater stand loss with the wet conditions in spring of 2019. Heaving was observed in patches in a few fields that have heavier soils, and in some cases the plants were completely ejected from the soil. Plants also had a greater level of damage inside the stems (hollow, rotten vascular tissue) on fields with heavier soils. It is important to cut plants at the soil surface and assess plant health as well as population in the spring. Fields with plants that have highly damaged vascular tissue and hollow stems should be terminated because the plants cannot transport water or nutrients and therefore have low yield potential (Figure 2). Cutting stems is important because plants that have very limited yield potential may appear healthy and green on the exterior in spring. Fields with minor damage inside plant stems may have slightly decreased yield potential and investment in spring nitrogen should be scaled back.

Yield results for the fields that had adequate winter survival are listed in Table 2. Although six different canola varieties were planted on these farms, the only variety registered and available for sale in Ontario is Mercedes. None of the listed varieties are herbicide tolerant. In two of the fields an open pollinated (OP) variety was used which expressed variable growth and did not meet yield expectations. For reference, the average provincial spring canola yield over the past 5 years is 2250 lbs/ac and for most spring canola producers the yield goal is 2205 lbs/ac (1 tonne/ac) or above.

Using multi-year data collected at the AAFC Harrow Research and Development Center, supported by anecdotal information about on-farm successes with modern winter canola hybrids, Agricorp expanded the regions in Ontario that have access to winter kill coverage. The current map outlining regions with coverage is provided in Figure 3. Contact Agricorp for more information about crop insurance for canola. 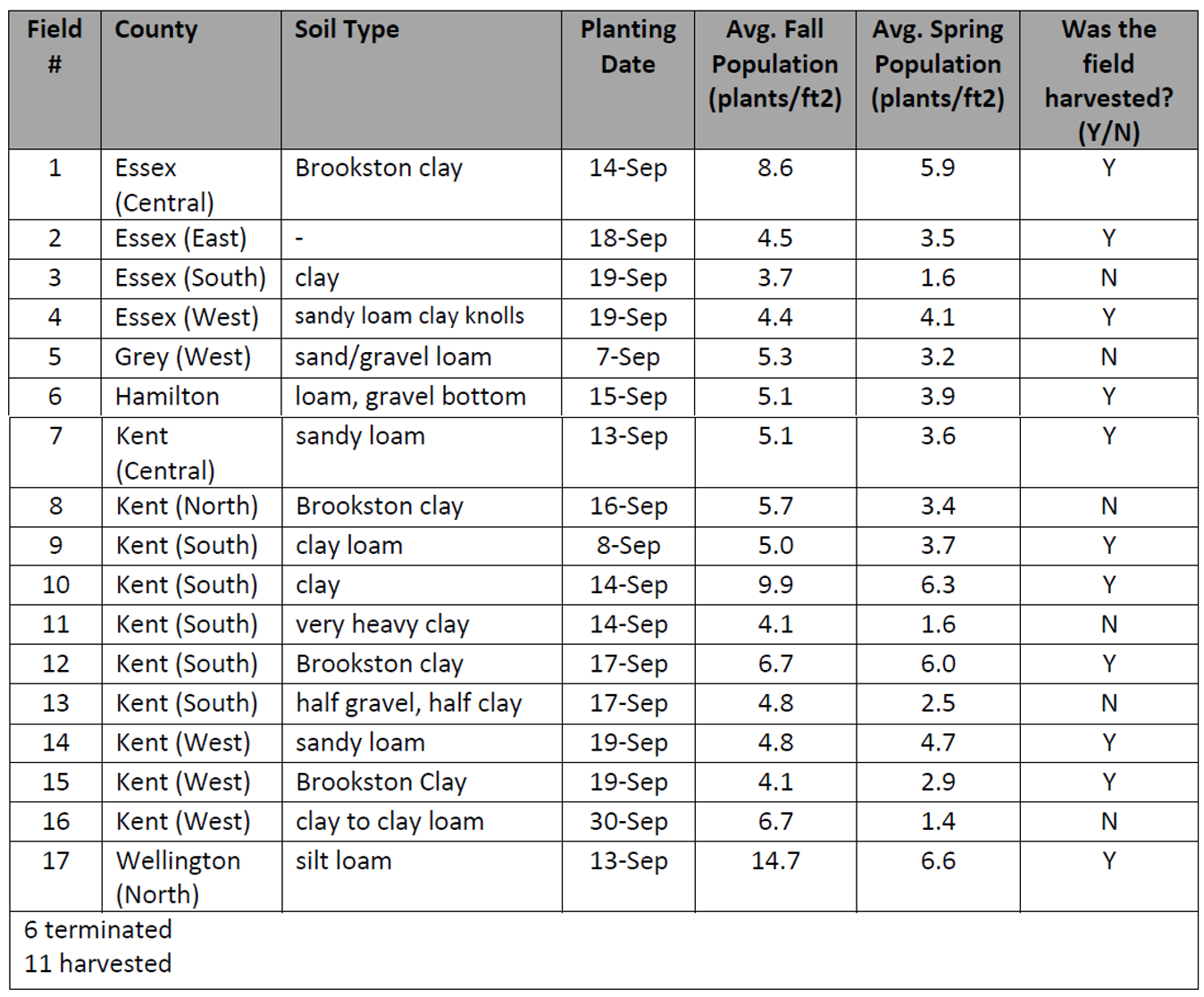 Table 1. Winter canola plant populations collected in fall of 2018 and spring of 2019 on 17 farm fields. 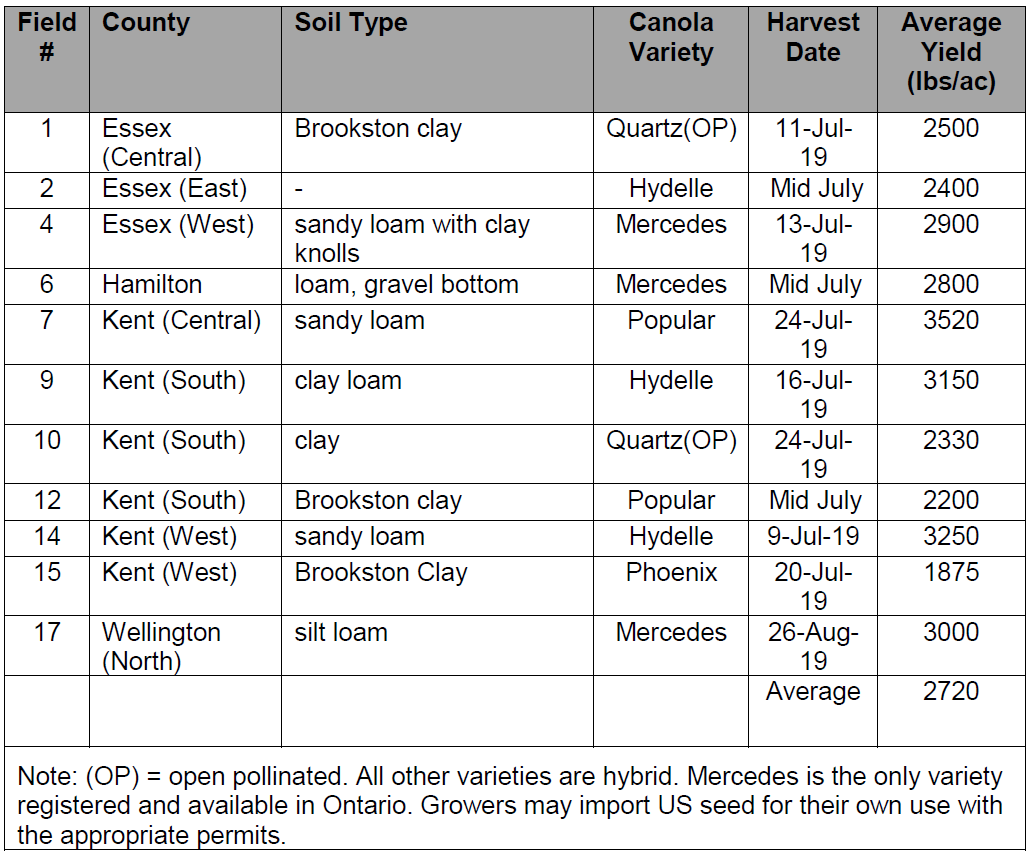 Planting dates have been studied in Essex county by Dr. Eric Page at AAFC Harrow Research and Development Center. There have also been some planting date trials at University of Guelph- Ridgetown Campus. In these regions, planting between September 5th and 15th is ideal, but in an open fall season it may be possible to plant into the 3rd week of September. Regions further north should plant canola earlier.

Winter canola should be planted approximately 7 to 10 days earlier than the ideal winter wheat planting timing for a region. There should be at least 600 Growing Degree Days accumulated between canola emergence and a hard frost. Research is needed to better define planting dates for counties north of Wellington, as well as in eastern Ontario or closer to the Great Lakes. Experience indicates that in Wellington county and further north, planting at the end of August or first of September should be considered.

Note that fast emergence and fast early growth are key in reaching the 4- to 6-leaf growth stage in fall, so seeds should be planted less than an inch deep and the appropriate fertility applied. Nitrogen and sulphur are a requirement, and starter phosphorous may be advantageous. Producers should also evaluate the herbicide history of their field and the risk of carry over that may damage canola and/or cause slow growth of canola in the fall.

Information on herbicide carry over risks can be found in OMAFRA Publication 75A: Guide to Weed Control. Ontario recommendations for winter canola are being updated through ongoing research at AAFC Harrow and through on-farm experience. Information on winter canola production, including fertility, can be found in OMAFRA Publication 811: Agronomy Guide for Field Crops as well as on FieldCropNews.com and GoCanola.ca.

Producers interested in growing winter canola are encouraged to contact Meghan Moran (meghan.moran@ontario.ca 519-546-1725), OMAFRA Canola & Edible Bean Specialist to discuss production and pest information, and to share their on-farm experiences with the crop. Moran is interested in visiting farm fields and supporting producers with spring survival evaluations and scouting.

This study was conducted by Sydney Meloche, Technician at AAFC Harrow Research and Development Center, and Meghan Moran, OMAFRA Canola & Edible Bean Specialist. Dr. Eric Page is acknowledged for his research on winter canola, his role in supporting the registration of Mercedes in Ontario, and ongoing research on winter canola production practices. Appreciation is extended to the farmer cooperators on the project who allowed data collection on their farms and shared their experiences, crop inputs and yield data.